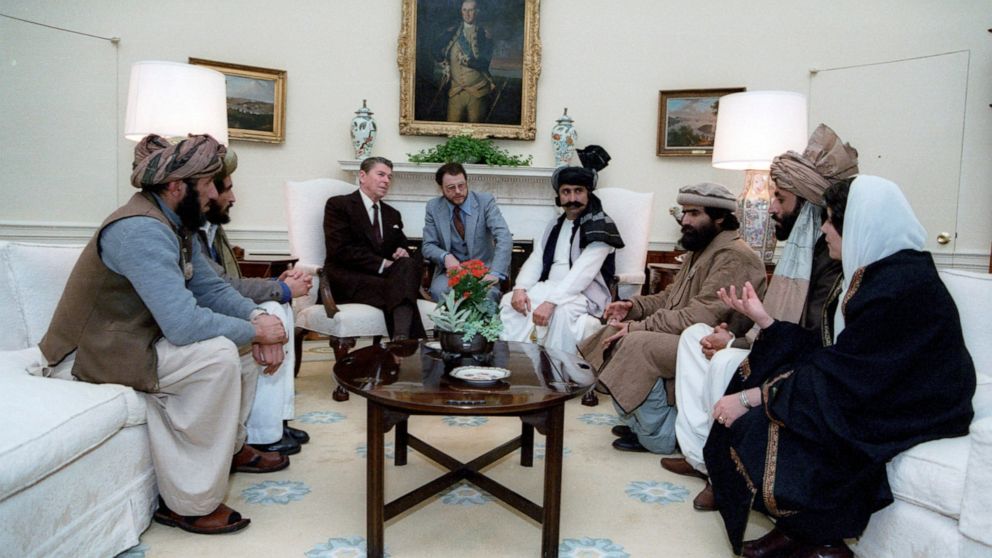 
The former Soviet Union invaded Afghanistan on Christmas Eve 1979, claiming that it had been invited by the new Afghan communist leader Babrak Karmal, and led the country on a path of 40 years of seemingly endless war and conflict.

After the humiliated Soviets left the country, America was the next great power to invade. After the terrorist attacks of September 11, 2001, the United States invaded to overthrow the Taliban regime that hosted Al Qaeda leader Osama bin Laden.

After almost 20 years, the US ends its war in Afghanistan and withdraws the last American troops.

What remains is the US-allied government, torn by corruption and divisions, and having to fend off the advancing Taliban insurgents amid stalled peace talks. Many Afghans fear that their country will plunge into chaos and intergroup fighting between warlords in the next chapter.

Here is a timeline of some key dates in Afghanistan’s 40 year war:

December 25, 1979 – The Soviet Red Army crosses the Oxus River into Afghanistan. Afghan mujahideen, or Islamic holy warriors, are gathering in neighboring Pakistan, armed and financed by the United States, for an anti-communist war. More than 8 million Afghans are fleeing to Pakistan and Iran, the first of several waves of refugees over the decades.

1980s – The CIA’s covert Operation Cyclone is smuggling weapons and money for the war through Pakistani dictator Mohammed Zia-ul Haq, who calls on Muslim countries to send volunteers to fight in Afghanistan. Bin Laden is among the thousands who volunteer.

1983 – President Ronald Reagan meets in the White House with mujahideen leaders whom he calls freedom fighters.

September 1986 – The US supplies the mujahideen with shoulder-mounted Stinger anti-aircraft missiles that change the course of the war. The Soviets begin negotiations to withdraw.

April 1992 – Mujahideen groups invade Kabul. The fleeing Najibullah is stopped at the airport and placed under house arrest on a UN compound.

1992-1996 – Power sharing among the mujahideen leaders collapses and they spend four years fighting each other; much of Kabul is destroyed and nearly 50,000 people are killed.

1994 – The Taliban appear in the south of Kandahar, conquer the province and establish a strict interpretation of Islam.

September 26, 1996 – The Taliban capture Kabul after sweeping the country almost without a fight; Northern Alliance forces are retreating north to the Panjshir Valley. The Taliban hang Najibullah and his brother.

1996-2001 – Although the Taliban were originally welcomed for ending the fighting, they rule with a heavy hand under Mullah Mohammed Omar, imposing strict Islamic edicts that deny women the right to work and girls the right to school. Punishments and executions are carried out in public.

March 2001 – The Taliban blow up the world’s largest standing Buddha statues in Bamyan Province to a global shock.

November 13, 2001 – The Taliban flee Kabul to Kandahar when the US-led coalition with the Northern Alliance invades the Afghan capital.

December 5, 2001 – The Bonn Agreement is signed in Germany, which gives the most important actors in the Northern Alliance a majority in power and strengthens the warlords who ruled between 1992 and 1996. Hamid Karzai, an ethnic Pashtun like most of the Taliban, is called Afghanistan. denotes President.

May 1, 2003 – President George W. Bush declares Mission Accomplished as the Pentagon says the great fighting in Afghanistan is over.

2004 and 2009 – In two general elections, Karzai is elected President for two consecutive terms.

Summer 2006: With the US stuck in Iraq, the resurgence of the Taliban is gaining momentum with escalating attacks. Soon they are beginning to recapture areas in rural areas of the south.

April 5, 2014 – The election of Karzai’s successor is deeply flawed and both front-runners, Ashraf Ghani and Abdullah Abdullah, claim victory. The US brokered a deal with Ghani as president and Abdullah as chairman of the board, ushering in an era of divided government.

2015-2018 – The Taliban continue to rise, launch attacks against Afghan and US troops almost daily, and take almost half of the country. A subsidiary of the Islamic State Group is established in the east.

September 2018 – Following his election promise to bring US troops home, President Donald Trump appoints veteran Afghan-American diplomat Zalmay Khalilzad as a negotiator with the Taliban. Talks will run until 2019, although the Taliban refuse to negotiate with the Kabul government and the attacks are escalating.

September 28, 2019 – Another sharply divided presidential election will take place. Ghani will only be declared the winner in February 2020. Abdullah rejects the results and holds his own inauguration. Months later, an agreement is reached that sets Ghani as president and Abdullah as head of the peace negotiation committee.

August 18, 2019 – Islamic State committed a suicide attack at a wedding in a primarily Hazara neighborhood of Kabul, killing more than 60 people.

February 29, 2020 – The US and Taliban sign an agreement in Doha, Qatar, which sets a schedule for the withdrawal of the approximately 13,000 US troops remaining in Afghanistan and obliges the insurgents to stop attacks on Americans .

September 12, 2020 – February 2021 – After months of delay, negotiations by the Taliban-Afghan government in Qatar open, stutter for several meetings and finally come to a standstill with no progress. Ghani rejects proposals for a unity government, while the Taliban rejects a ceasefire with the government.

March 18, 2021 – After the US tabled a draft peace plan, Moscow hosted a one-day peace conference between rival Afghan sides. Attempts to resume the conversations fail. The Taliban and government negotiators have not sat at the table since then.

2019-present – Violence is increasing in Kabul. IS is carrying out brutal attacks, including on a maternity hospital and school, and killing newborns, mothers and schoolgirls. There is also a growing wave of indiscriminate attacks, undetected and mysterious, with shootings, assassinations and sticky bombs on cars spreading fear among Afghans.

May 2021 – Today – Taliban gains on the ground accelerate. Several districts in the north, outside the Taliban heartland, fell victim to the insurgents, some of them without a fight. Ghani cites a public mobilization in which local volunteers are armed, a move that could exacerbate the many factions.

July 2, 2021 – The United States surrenders Bagram Airfield to Afghan military control after the last troops leave the base. The relocation of Bagram, the centerpiece of the US military presence in Afghanistan throughout the war, signals that the full withdrawal of American forces is imminent, which is expected in days, well ahead of Biden’s 9/11 schedule.