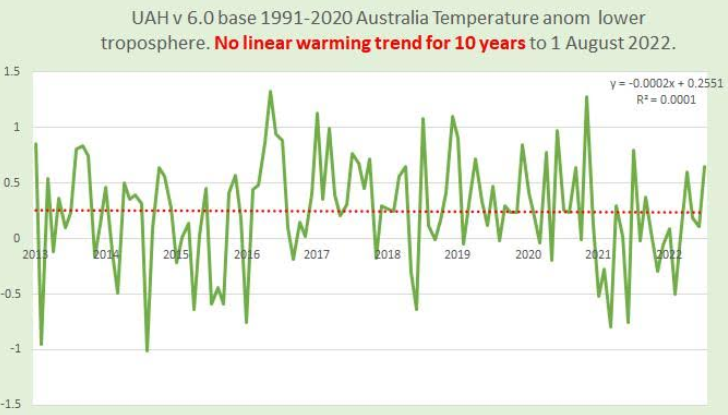 The poet Henry Longfellow wrote in 1845, “I shot an arrow in the air / It fell to the ground I did not know where.” The same thing happened to mine quadrant online Article two weeks ago about satellite measurements of Australian temperatures. A scientist friend, Geoff Sherrington, had the latest data from the UAH satellites (Above) and found that Australia has not warmed in the last decade – so much for the “climate emergency”. The planet itself hasn’t warmed in nearly eight years, the satellites say.

The play was titled “A Clear Case of Hot, Hotter… Duped”. Curiously, it caused quite a stir in the Parliament of British Columbia (BC), Canada’s westernmost province. BC is about the size of NSW and Queensland sized

John Rustad (To the right), the BC Liberals’ shadow spokesman on forests (he’s worked in forests for 20 years), was fired by his party last week for tweeting a link to quadrant Piece. He now sits on the cross bench as an independent.

The BC Liberals are vaguely centre-right and were ousted in 2017 by the union socialist New Democrat Party (NDP), which was initially allied with the Greens but has ruled alone since 2020. Liberals are totally wet, brimming with climate alarmism and not lacking in hypocrisy. The Liberals and NDP can afford their anti-emission policies because the province is almost 95 percent hydroelectric (Australia: 6 percent hydro).

♦ Vancouver resident Dr. Patrick Moore, a former Greenpeace founder but now a member of the skeptical science group CO2 Coalition, liked them quadrant piece and tweeted it on August 14th. His Twitter followers total around 119,000. He added: “The case for CO2 as a global temperature regulator grows weaker by the day… #CelebrateCO2.”

♦ BC Liberal John Rustad retweeted Moore’s tweet. To punctuate a cliché, the next day all hell broke loose. Liberal opposition leader Kevin Falcon felt that Rustad was sabotaging his party’s efforts to save the planet from insidious CO2. A day later he expelled him.

♦ The BC media hacks threw objectivity to the four winds (another cliché, sorry) and pitched Moore and Rustad as examples of climate denial. They combed the records and social media to release evidence of the couple’s heresies. In doing so, they hilariously exposed their own ignorance of things like the life-affirming properties of CO2, which every 13-year-old botany student is taught (or once was taught). They were also incredulous that Moore would tweet that Great Barrier Reef corals are in record health, even though that is now Australia’s official position.

♦ In addition to the media rush, LinkedIn now has Dr. Moore locked.

There’s a wealth of themes in this strange saga, particularly how dangerous it is to question the climate apocalypse narrative. The climate story is such a house of cards that proponents, especially big tech, want to crush doubters before they can rock the structure.

Patrick Moore is a case in point. He was President of Greenpeace Canada for nine years and Director of Greenpeace International for seven more years. He has a science honors degree in forest biology and a PhD in ecology.

In 1986 he left Greenpeace over his extremist agendas, particularly his perverse opposition to the chlorination of drinking water to combat disease. He is now director of the Virginia-based CO2 Coalition, which compiles peer-reviewed scientific papers that contradict IPCC dogma, and is a senior fellow at America’s leading conservative group, the Heartland Institute. He toured Australia in 2014 giving public lectures for the Galileo movement. His campaigns include promoting “Golden Rice” to fix children’s vitamin A deficiencies, in contrast to Greenpeace campaigns against the life-saving rice supplement.

Greenpeace, Wikipedia and other liars are now rewriting history to deny that Moore was a co-founder of Greenpeace. JoNova refutes her claim here.

Moore both retweeted quadrant‘s article and published it on LinkedIn, Microsoft’s professional networking company.[1] A day or two later, LinkedIn suspended his account, claiming unspecified violations of its “professional community standards.” Moore doesn’t know if the timing was accidental. “Just another example of power-stumbling egomaniacs who now reject freedom of expression, even when it’s the truth,” he says. “I’ve made many posts and they don’t give you any indication of which part of which post they consider a violation. There’s nothing professional about their ‘Professional Community Standards’ other than the name.”

Wrightstone believes LinkedIn has set out to silence the carbon coalition. He was permanently banned without warning after publishing two IPCC self-derived climate charts, and the coalition page was shut down. He says: “This is in contrast to the long and rich traditions of Western civilization that established the scientific method. All sane people should be put off by LinkedIn’s actions.”

TURN now the Liberals, Socialists and Greens in the BC Parliament appear to be competing for alarmist credentials. Falcon, the alleged right-wing Liberal Party leader, says on his website that he is proud to have helped introduce a revenue-neutral carbon tax in 2008 while serving in a previous government. BC was the first North American jurisdiction to do so. He says the policy has been “praised” by the OECD, the UN and the New York Times – some credit for it.

His position can be reproduced in excerpts:

♦ “Like any team, our caucus works on the basis of mutual respect and trust. While diversity of perspectives is encouraged and a source of strength, they cannot exist without this important foundation. Following a pattern of behavior that did not support our caucus team and the principles of mutual respect and trust, I have removed MLA John Rustad from the BC Liberal Caucus effective immediately.”

♦ “Anyone who has fundamental doubts about the reality of climate change will not be welcome in BC’s Liberal faction.”

♦ “Climate change is one of the greatest threats to our future. BC Liberals are strongly committed to reclaiming BC’s position as a global leader in climate action.”

Rustad’s denial acknowledges adverse human-caused warming is occurring, but says attacking carbon emissions would cause real damage to vulnerable communities. CO2 causation is a theory that should be up for debate, he says. In particular, current targets to suppress nitrogen-based fertilizers would result in global food shortages, made worse by rising fuel prices. He would not engage in elitist policies to punish local families who are already trying to cope with high inflation. These issues are more important than facades of unity in the party faction.

He has also called out alarmists because they have blamed weather mishaps like flooding on the climate. Alarmists are issuing “extreme heat warnings” for 27-degree days with drizzle, while people in BC in the 1980s considered 30-degree days normal, he says. Instead, political priorities should be affordable housing, food and energy, and effective healthcare.

Although it’s nice to know quadrant‘s readership girds the planet, I’m sorry to have thrown Mr. Rustad into such hot water. I think politics is not for the faint of heart.

[2] Wrightstone, with a Masters in Geology, has served as a consultant for the IPCC itself.