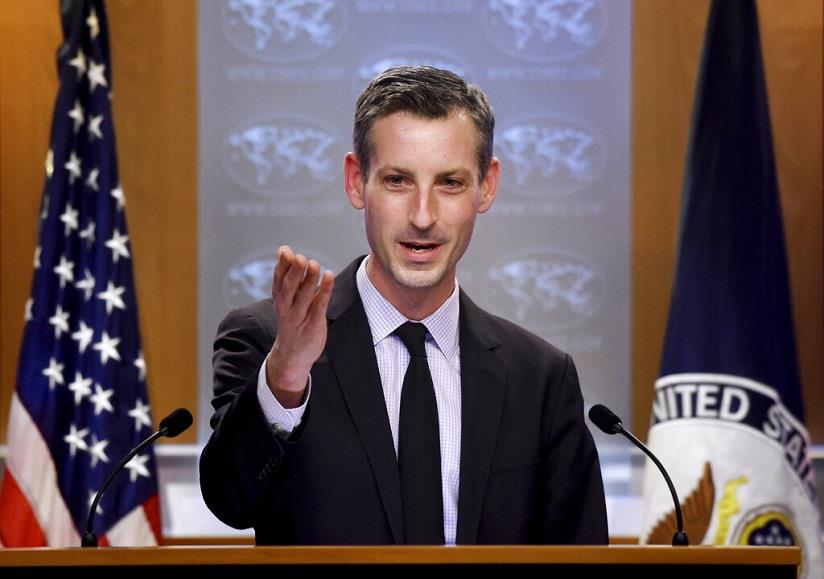 Washington- The US has said it stands with India against Chinese intimidation after Beijing seconded a PLA officer, part of the military command that attacked Indian soldiers in the Galwan Valley in 2020, to be a torchbearer for the Beijing Winter Olympics.

China on Wednesday deployed a regiment commander from the People’s Liberation Army (PLA) involved in the June 2020 clash with the Indian soldiers in East Ladakh’s Galwan Valley to carry the torch of the Beijing Winter Olympics, prompting India to to announce a diplomatic boycott of the opening and closing ceremony of the sporting mega-event on Friday.

When asked about China’s provocative move, State Department spokesman Ned Price told reporters at his daily news briefing on Thursday that the US had previously expressed concern about Beijing’s pattern of ongoing attempts to intimidate its neighbors.

“When it comes to the broader issue of the India-China border situation, we continue to support direct dialogue and a peaceful resolution of the border dispute,” Price said.

“We have already expressed our concern about Beijing’s ongoing attempts to intimidate its neighbors. As always, we stand with friends. We stand together with partners and allies to advance our shared prosperity, security and values ​​in the Indo-Pacific,” he said.

The US, India and several other world powers have spoken about the need to ensure a free, open and prosperous Indo-Pacific amid China’s aggressive military maneuvers in the resource-rich region, which is also vital to global trade and shipping.

China claims almost all of the disputed South China Sea, although Taiwan, the Philippines, Brunei, Malaysia and Vietnam claim all parts of it. Beijing has built artificial islands and military installations in the South China Sea. China also has territorial disputes with Japan in the East China Sea.

Meanwhile, two senior US senators have criticized China for its decision to appoint the PLA’s regimental commander as torch bearer for the Games’ torch relay.

“Another egregious example of the #CCP’s flagrant politicization of Beijing 2022. Your decision to choose a soldier who took part in an ambush against Indian troops in 2020 as a torch bearer is appalling and deliberately provocative,” Senator Marco Rubio said.

The Florida senator said he stands by India.

Also in another tweet, Senator Jim Risch, a senior member of the US Senate’s powerful Foreign Relations Committee, said the US will continue to support India’s sovereignty.

“It is shameful that Beijing has chosen a torchbearer for the 2022 Olympics who is part of the military command that attacked India in 2020 and is carrying out genocide against the Uyghurs. The US will continue to support Uyghur freedoms and Indian sovereignty,” Risch tweeted.

House Speaker Nancy Pelosi claimed that this is an attempt by the Chinese government and Chinese Communist Party to use the glitz and glamor of the Olympics to present a facade that diverts global attention from egregious human rights abuses in China .

“These efforts raise many questions for the Congressional-Executive Commission on China (CECC) to consider throughout 2021 regarding International Olympic Committee policies, the link between major sporting events and human rights, and the responsibilities of governments, sports governing bodies and corporate sponsors investigated , broadcasters and others associated with these Olympics,” she said.

Meanwhile, Rubio was joined Thursday by several other senators, including Rick Scott, Josh Hawley, Mike Braun, Ted Cruz and Bill Hagerty, in introducing the “No PLA Loopholes” bill — a bill to fill a loophole in the existing law to close Limit joint military operations and exercises between the United States and the Chinese Communist Party’s (CCP) armed wing, the People’s Liberation Army (PLA).

Twenty members of the Indian army lost their lives in the clashes in Galwan, which represented the worst military conflict between India and China in decades.

In February last year, China officially admitted that five Chinese military officers and soldiers were killed in the clashes between Galwan and the Indian Army, although it is widely believed the death toll was higher.

Beijing is hosting the Winter Olympics amid a diplomatic boycott by the US, the European Union and several Western countries over their allegations of human rights abuses in Xinjiang, including the detention of over a million Uyghur Muslim men and women in camps.


Disclaimer: MENAFN provides the information “as is” without any warranty of any kind. We assume no responsibility or liability for the accuracy, content, images, videos, licenses, completeness, legality or reliability of any information contained in this article. If you have any complaints or copyright issues related to this item, please contact the above vendor.

Alumna nominated for Military Spouse of the Year award.