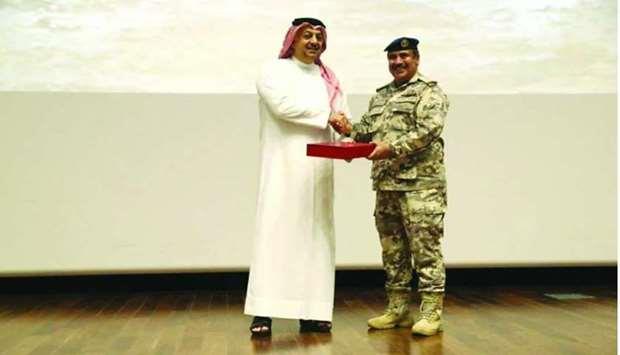 (MENAFN- Gulf Times) The armed forces honored the participants in the Battle of Al Khafji and the Liberation Operation of Kuwait during a ceremony in the theater of the National Service Academy in Miqdam Camp under the auspices and presence of HE, Deputy Prime Minister and Minister of State for Defense Affairs Dr. Khalid bin Mohamed al-Attiyah.

During the ceremony, HE Dr. al-Attiyah the participants of the Al Khafji Liberation Battle and presented them with the Medal of Courage. He also honored participants in the Kuwait Liberation Operation and presented them with the Medal of Military Operations on behalf of His Highness, the Commander in Chief of the Armed Forces.
A short film reminiscent of the Armed Forces‘ participation in the Battle of Al Khafji and the Kuwait Liberation Operation was shown during the ceremony, which was attended by senior military officers.

Disclaimer: MENAFN provides the information “as is” without any guarantee. We assume no responsibility or liability for the accuracy, content, images, videos, licenses, completeness, legality, or reliability of the information contained in this article. If you have any complaints or copyright issues related to this item, please contact the above provider.

What can we learn – The Skidmore News