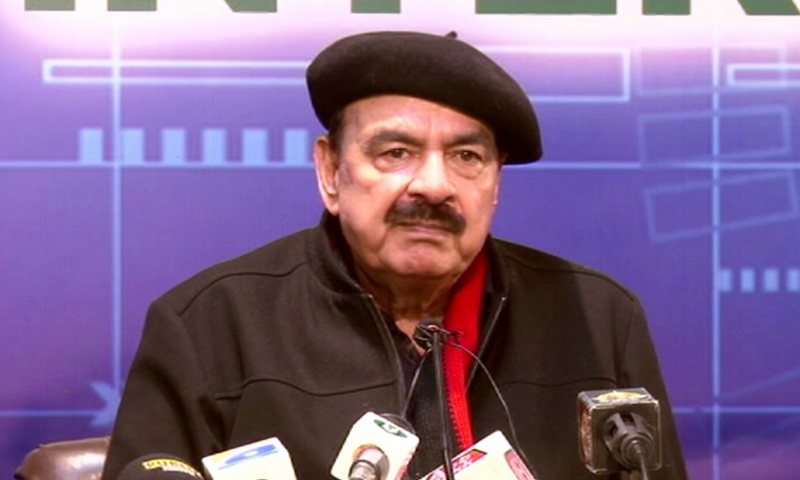 Interior Minister Sheikh Rashid said Saturday his ministry had alerted all armed forces, including civilian law enforcement, and urged them to remain vigilant.

“Last night, the Home Office urged all armed forces, civilian armed forces, IGs (inspectors general of police), chief secretaries, frontier corps IGs and rangers IG to remain vigilant and vigilant,” he said, speaking at a news conference in Islamabad, where he spoke about the recent increase in terrorist attacks.

Following the blast in Lahore’s Johar Town in June last year, the minister said another incident took place in Anarkali district on Thursday. In addition, a few days ago, “two terrorists were killed in Islamabad” in a shootout.

Here he also mentioned that the Baloch Nationalist Army claimed responsibility for the Anarkali blast.

Recalling those incidents, he said, a “push in the wave [of terrorism]’ had been observed in the country in the recent past, with terrorist incidents increasing by around ’35 percent since March 15′.

“But that cannot bring down our nation, our morale, our spirit and our armed forces,” he added. “You will see progress in Pakistan,” he said, adding that the country had not only killed around 80,000 people in the war on terrorism, but also spent $150 billion on it.

The nation, he said, is ready to face the challenge of terrorism with courage.

When asked about the progress of the investigation into the Anarkali blast, he said authorities have a lead and are following a suspect. But he refrained from giving further details, saying: “The Indian television [channels] will [tirade] against me…they can only see either Imran Khan or Sheikh Rashid.”

Discussions with the TTP

Rashid also spoke about failed talks between the outlawed Tehreek-i-Taliban Pakistan (TTP) and the government and the Afghan Taliban’s role in brokering those talks.

He said the Afghan Taliban had “played the role of a bridge” in the matter, but the talks broke down because the TTP’s terms were such that they could not be accepted.

The minister said: “Our doors are open to them (the TTP) if they want to approach us and abide by the law and the constitution of Pakistan… but if they fight, we will hit back.”

In addition, the mood in Afghanistan is no longer directed against Pakistan.

Rashid went on to explain that after the Afghan Taliban’s defeat of the Afghan National Directorate of Security, the Indian Research and Analysis Wing in Afghanistan and 42 international armed forces, “some small groups want to create an environment of terrorism in Pakistan”.

But they would be defeated, he expressed determination.

The minister then turned to the opposition, particularly the Pakistan Democratic Movement (PDM), a multi-party coalition that has announced a long march to protest rising inflation in Islamabad on March 23.

On March 23, Rashid said, leaders from various countries would be in Islamabad to attend a summit of the Organization of Islamic Cooperation (OIC).

Therefore, routes in the capital would be closed from March 21st or March 22nd.

In view of this situation, he asked the PDM to postpone the march to another day.

“Reconsider your decisions. There is Covid-19 and [then] There are international affairs [that are of significance]’ he said, adding that ‘hundreds of guests will be here to attend the OIC Summit’.

He suggested that the PDM delay its march to four days before or after March 23.

“And if the opposition makes a mistake that leads to a loss of democratic character, it will actually be their (opposition) loss,” he said. “We don’t intend to create any obstacles [in the opposition’s way].”

He added that the government would not do anything unless the PDM “takes the law into its hands”.

Asked about reports of efforts by some sections to push for a presidential system and the imposition of a state of emergency in the country, Rashid put the rumors to rest, saying no such recommendation was made in the “cabinet I belong to”.

In response to another question, he deplored and condemned the “somber condition of Muslims in India.”

“India is no longer secular,” he commented.

Formula 1 bans military flyovers, but not in the UK