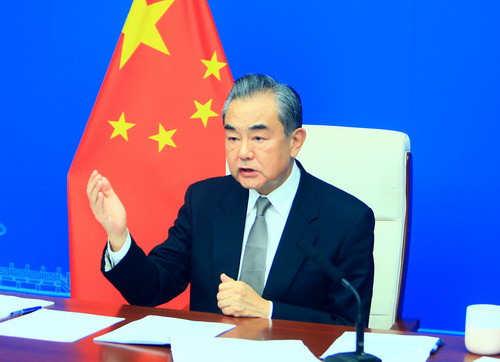 
State Councilor and Foreign Minister Wang Yi will speak via video link on the 11th round of the high-level strategic dialogue between China and the European Union with Josep Borrell, the EU High Representative for Foreign Affairs and Security Policy on September 28, 2021. (Photo / fmprc .gov.cn )

US, British and Australian pacts could spark an arms race and threaten the international order

State Councilor and Foreign Minister Wang Yi warned on Tuesday that the AUKUS security agreement of the US, UK and Australia would bring hidden risks such as an arms race and nuclear proliferation to regional peace, stability and international order.

Wang made the remark while co-chairing the 11th round of the high-level strategic dialogue between China and the European Union via video link with Josep Borrell, EU High Representative for Foreign Affairs and Security Policy.

The deal, which allows the US and UK, two nuclear-armed states, to export nuclear submarines to Australia, a non-nuclear-armed state, would include the transfer of sensitive nuclear materials such as weapons-grade highly enriched uranium and related technology and equipment.

At a time when the international community broadly opposes the Cold War and partition, the three countries will exacerbate geographic tensions and their actions may lead to the resurgence of a Cold War by building a new military bloc, with ideology as the criterion is said Wang.

The move will cause some countries in the region to increase their military strength and even try to lower the threshold for using nuclear weapons, which increases the risk of military conflict, he said.

Wang said the AUKUS deal will also damage the nuclear non-proliferation system, damage the South Pacific Nuclear Free Zone Treaty, and undermine efforts by members of the Association of Southeast Asian Nations to establish a nuclear free zone in the region.

The international community, particularly the Asia-Pacific countries, is very concerned about the development of such cooperation and many countries have expressed their concerns and doubts, he said.

Rafael Grossi, Director General of the International Atomic Energy Agency, said on Tuesday in the BBC’s HARDtalk program that the AUKUS deal â€œis a technically very tricky question, and it will be the first time that a country without nuclear weapons will have a nuclear submarine “.

The Philippine President Rodrigo Duterte had expressed concerns about a regional nuclear arms race with the AUKUS Pact, his spokesman said on Tuesday.

“China will negotiate with the IAEA Secretariat and other member states of the agency to firmly secure the authority and effectiveness of the international nuclear non-proliferation regime,” said Hua.

During the high-level strategic dialogue between China and the EU, Wang urged both sides to consolidate the current positive dynamic of mutual contacts, strengthen political mutual trust and adequately manage differences in order to contribute to addressing global challenges such as COVID-19 -Pandemic to perform. 19 Pandemic and Climate Change.

He also stressed that the one China principle is the political basis for China to build relations with the EU and its member states.

Borrell said the EU views China as a key strategic partner and developing relations with China is a major issue for the bloc.

He also said the EU will respect China’s sovereignty and has no intention of lecturing Beijing. The EU will always follow the one-China principle and never have an official exchange with Taiwan, he added.