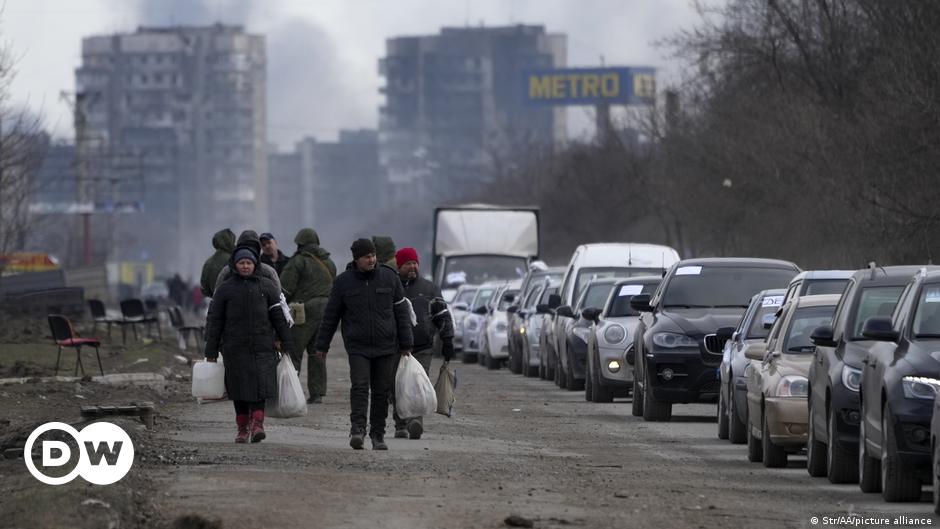 Can Ukraine deal with “a war criminal”? | Europe | News and current events from across the continent | DW

It’s easy to lose sight of the way in which the invasion of Ukraine has shifted from an ostensible intent to neutralize military targets to the mass murder of civilians, an attack on civilian infrastructure, and the desertification of the country.

But the mounting evidence that atrocities follow each other in quick succession explains the shift in sentiment in the international community in the wake of the Russian attack.

Images of hell now include the bombing of hospitals, crushing pregnant women under falling debris, the murder of children, the shelling of schools and the use of artillery fire against large apartment blocks. In the nightmarish bombardment that Russia has inflicted on Ukraine’s civilian population, only two or three isolated reports of Russian attacks on military targets seem to provide meager evidence of the Kremlin’s stated intentions.

A major shift in tone from the West

US President Joe Biden may have given the clearest sign of a changed perception of the conflict when he referred to his Russian counterpart Vladimir Putin in no uncertain terms: “I think he’s a war criminal,” Biden told reporters after statements in the White House last week. On Monday, Pentagon spokesman John Kirby doubled down on the allegation. “We see clear evidence that Russian forces are committing war crimes and we are helping to collect evidence of this,” Kirby said in a news conference on Monday. EU foreign policy chief Josep Borrell also said at the beginning of a meeting of EU foreign ministers that evening: “What is happening now in Mariupol is a massive war crime that is destroying, bombing and killing everything.”

Biden’s statement — which came hours after Ukrainian President Volodymyr Zelenskyy addressed the US Congress directly and showed footage of the carnage to his audience — not only changed the nature of the conversation, it could also mark a major shift in the nature and way have signaled how the White House sees its own responsibilities.

Speaking to DW’s Conflict Zone last week, retired US Army General Ben Hodges laid out his well-considered case for intervention the border flies. I’m talking about what Putin is doing, what the implications are for Europe, stability and security in Europe… I think NATO needs to look at this more broadly.”

But the reasons are not just geostrategic. Hodges’ comments underscore the strong moral case for countering Putin’s threats. According to the general, the current situation in Ukraine is similar to one where Western nations have failed to protect civilians in previous conflicts.

“European troops under a United Nations mandate stood outside the city while the forces of the Republic of Srpska murdered 8,000 Bosnian men and boys. I don’t want us to be involved in anything like this again.”

Echoing other military leaders, including US General Barry McCaffrey, who last week gave strong reasons for going to war on NBC, Hodges believes the West may be approaching a moment when a forceful response becomes inevitable.

Nevertheless, the legal thresholds for a third country to enter the conflict in Ukraine are practically unattainable. Only the United Nations Security Council (UNSC) could authorize the use of force. But given that Russia, as a permanent member of the UNSC, not only has veto power but also chairs the body, this is simply out of the question.

Not only has the Russian advance provided a glimpse of the efforts the Kremlin is willing to go to to subjugate a country and people it sees as legitimate clients of its own sphere of influence, it has also shown the limits of its ability to do so .

Reports of the state of Russian military misadventure include large numbers of Russian soldiers killed, entire columns of tanks shot down by Ukrainian forces, and an army generally unable to carry out the Kremlin’s stated mission to take over Ukraine and replace her government. A very aggressive Ukrainian resistance has prevented the Russian advance in large parts of the country.

But Russia’s disarray and military weakness hides the more ominous threat of opening up a much more destructive front with the possible use of tactical nuclear weapons. When asked in Congress a few weeks ago if this was possible, Fiona Hill, a longtime expert and adviser to the American government on Russian affairs, said that Putin would indeed make use of these tools at his disposal if he needed them.

But without disputing Hill’s view, both McCaffrey, who also served as US Deputy Representative to NATO, and Hodges, the former commander of US forces in Europe, see the possibility as very unlikely. “I think we’re overreacting to Russian threats to escalate the war and use nuclear weapons. I don’t think the Kremlin will use a nuclear weapon,” Hodges told Conflict Zone host Tim Sebastian.

Nato, EU membership are on the brink

Meanwhile, the Ukrainian government continues to negotiate a ceasefire and possible de-escalation with the Russian government. Ukraine has in principle renounced further NATO membership, which, given that it would require an amendment to its constitution, which was amended in 2019 to include an explicit desire to join NATO and gain EU membership, represents a significant change in their position.

pension US Army General Hodges, here in Lviv in 2015: “What is happening in Ukraine is not limited to Ukraine”

But even if a ceasefire were in sight, the broader political issue seems to be lurking just behind it. What future geopolitical order can be created if a Russian government evades investigation and punishment for killing civilians, destroying entire cities, and indiscriminately violating international human rights law? And what kind of negotiation or agreement could be reached with a government that has systematically lied about its intentions, betrayed the trust placed in it by the international community, and violated previous agreements?

What is expected of Russia is not just a ceasefire and de-escalation, but payback to rebuild a country that has destroyed much of its infrastructure, industrial complex, public wealth and services at the hands of the wanton brutality of the advancing army in one unprovoked war. But perhaps more importantly, the bodies of civilians the Russians have targeted, according to preliminary reports at least, will require redress, and that means war crimes investigations and trials. This is exactly what the prosecutor at the International Criminal Court, Karim Khan, is investigating. And as international human rights lawyer Bill Bowring tells DW, it could actually mean indicting Putin for war crimes.