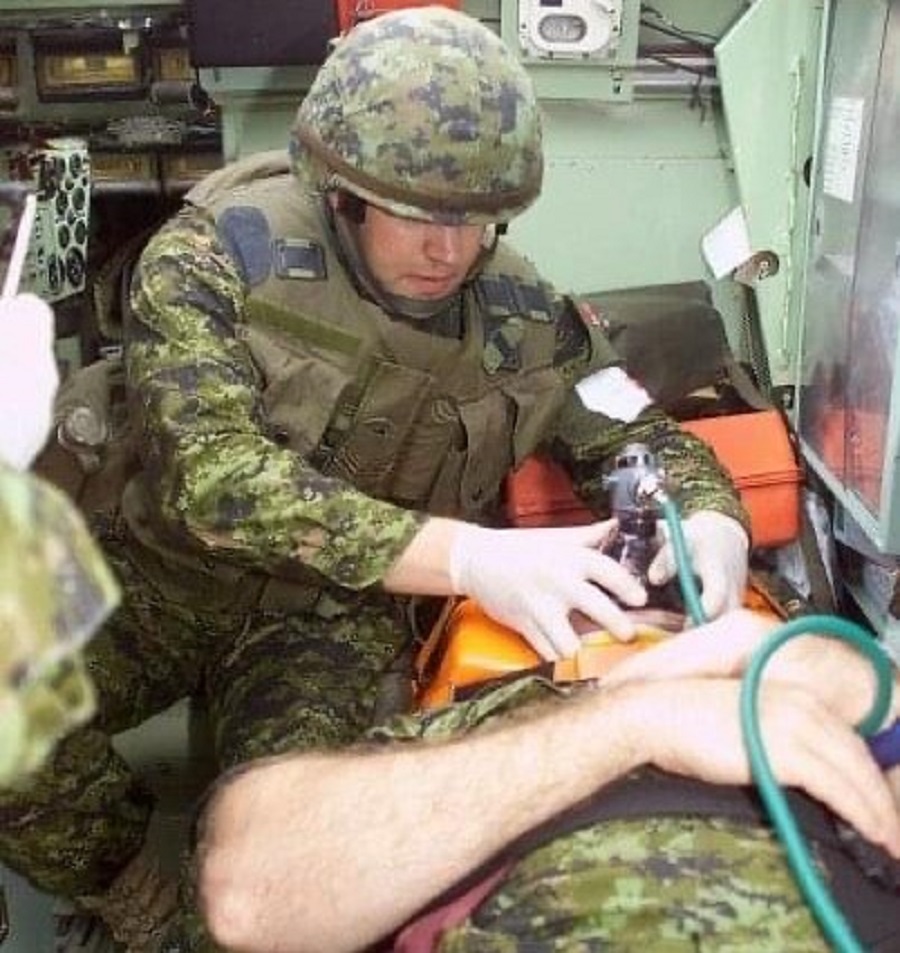 Although he was initially told that there were no medic positions in the Army, his perseverance and determination would ultimately pay off as he was told just before he began his basic training that a medic position was open. Five years after being deployed as a medic in the back of an armored ambulance in Bosnia in 2003, Lanoway was set to be deployed again, this time in Afghanistan.

“The threat level was extremely high. Canadians were routinely killed on missions. I lost two very good friends on the mission; both were medics.”

One of those friends Lanoway lost in Afghanistan was Calgarian Cpl. Michael Starker of the 15th Field Ambulance Regiment. Starker, who also worked as a medic out of Calgary, was killed in an ambush west of Kandahar in May 2008. When it came time for Cpl. When Starker’s body was to be transported home on his final journey, it was Lanoway who accompanied him.

“It was a very hard thing because you just lost someone you really respect and look up to. He was probably one of the best soldiers I’ve ever worked with, and everything about him was about being a soldier,” Lanoway said. “I think the difficult part for me is when it happened. Up until that moment, I felt indestructible, and then when Mike was killed, it erased that indestructibility.”

One of the clearest memories of his duty to the country was when Lanoway arrived home in Canada to find the fallen medic and his good friend overwhelmed, only to have to immediately return to Afghanistan to continue his tour.

“It was a great honor and I feel very privileged to have been chosen as an escort, but at the same time it was, in my opinion, the hardest thing I’ve ever done.”

Although the trips last six months, Lanoway would serve in Afghanistan for eight months, having volunteered to stay longer if needed. Lanoway would also serve in Bosnia five years prior to his deployment to Afghanistan. Although the landscapes and conflicts between his two foreign assignments were very different, he emphasized that Bosnia touched him deeply.

“It was tough in the sense that it’s an incredibly beautiful country, but everywhere you went there were bombed out villages and mass cemeteries,” Lanoway said. “I watched kids playing on concrete all the time; they didn’t play football on the fields because many of the fields still had landmines, so the kids learned to play on the hard surface where they didn’t have to risk being blown up.”

During his six-month tour, he also visited Sarajevo on a reconnaissance mission, accompanied by a German medical team. The team showed Lanoway the state of hospitals in the area. Touring the area, Lanoway found that a sports stadium that hosted the 1984 Olympics had been turned into a makeshift morgue during the conflict. Then there was what Lanoway said was a sea of ​​white.

When his tour ended and he returned home, Lanoway said he had a very different perspective on life in Canada.

“I had a new appreciation…kids could play in a park without the risk of being blown up every day, or watch people go to Starbucks and complain that their coffee was five minutes late, and then I was only in one village that had no running water or half the village was destroyed or lost in the war. Canadians actually have it pretty good if you look at other societies around the world,” he said. “You can see how much we have, and it’s just amazing for me to see how much we complain about what we have.”

While still reflecting on how lucky Canadians are to live in a country that hasn’t seen war or destruction within its own borders, Lanoway also reflects on how Remembrance Day has changed for him. When Lanoway was younger and had a family in the military, he often heard stories from veterans of World War II and other wars, although he said it was almost like reading a history book.

“It’s tough and impactful, but at the same time it hasn’t really impacted me, as much as I marked Remembrance Day out of respect for everyone who served before me and lost their lives, it never really managed to remember everyone.” who I knew because I personally didn’t know anyone who had ever been killed in combat,” he said. “After Afghanistan, knowing two medics as well as some of the other people who were killed in the conflict really opened my eyes what the memorial day means.”

For Lanoway, there is now a much deeper and murkier understanding of the day as he remembers not only those who died before him but also those who died by his side. And although he has lost colleagues and friends, he is certain that even knowing what he now knows and having seen what he has seen, given the choice again, he would still have become an Army medic would have.

Perhaps one of the most disheartening questions all Canadians might ask on November 11 is that those performing military service are fully aware that they may be asked to pay the ultimate price for doing their duty, and yet do so she it but why?

“I think everyone has their own answer to that. This is perhaps the most challenging question anyone has ever asked me. I think Canadians are given a lot of rights and a lot of protections, and it’s not like that everywhere in the world,” he said. “I think people joining the canadian [Armed] Armed Forces not only want to serve Canada and be part of this great tradition, but also want to make the rest of the world a little better.”

Lanoway continues to work in the paramedical field, albeit without his Kevlar and suits. He currently works in Calgary as a Clinical Operations Supervisor. He previously worked as a paramedic in Calgary.