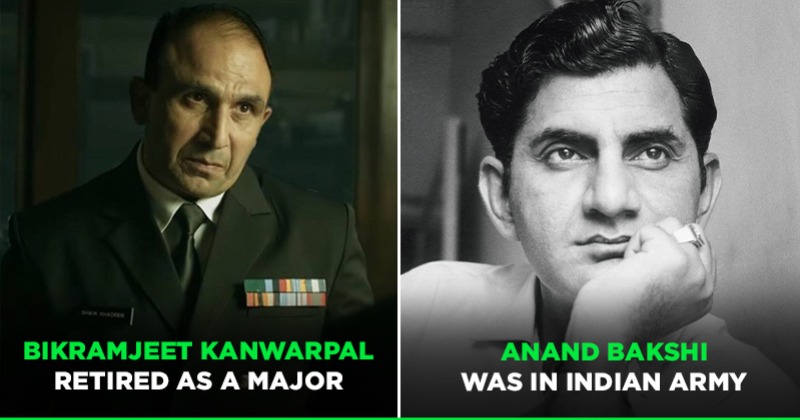 That Indian Armed Forces remains one of the most powerful in the world and the Indian film industry is one of the top-selling industries in the world. Everyone wants to be part of one of them, but did you know that there are some famous people who have been lucky enough to work in both fields? Continue reading:

Gufi Paintal was in the army before the cinema | Photo: TOI

Gufi Paintal is a senior Indian actor who played notable roles in Bollywood films as well as TV series in 1980s and gained popularity through unforgettable legendary series Mahabharata. He played the role of Shakuni mom in the series. In an interview with Dainik Bhaskar, Gufi recounted that the war between India and China began in 1962 while he was studying engineering, and at that time direct recruitment from college began. Gufi always wanted to join the army. So he jumped at the opportunity and was stationed in the Army Artillery on the Chinese border.

Anand Bakshi was in the army | Photo: Spotify

One of the best and most successful lyricists in Indian cinema, Anand Bakshi had written over 3000 songs in almost five decades and some of the most popular hits like “Achha to hum chalte hain” (Aan Milo Sajna, 1970), “Do lafzon ki hai” (The Great Gambler, 1979) and the legendary “Kuchh to log kahenge” (Amar Prem, 1972) and many more. But did you know before you started his Bollywood journey? Bakshi joined the Royal Indian Navy in 1944 but after the partitions his family then moved to India he joined the Indian Army and served the nation until 1956? He always wanted to be a poet and wrote poetry from a young age. He often used his song and lyrics in army programs related to the Indian Army. He died in 2002 at the age of 71.

Bikramjeet Kanwarpal was in the Indian Army | Photo: Scene from “The Gazi Attack”.

Actor Bikramjeet Kanwarpal has appeared in movies like Page 3, 2 States and 24 as well as some popular TV series like Adaalat. Kanwarpal was born into an army family and after completing his education he also joined the Indian Army in 1989 and retired from the army in 2002 as a major. He made his acting debut in 2003 after retiring from the Indian Army, but unfortunately he was died at the age of 52 due to complications related to the coronavirus in May 2021.

Rehman was an Indian film actor whose career spanned from the 1940s to the late 1970s. He is best known for his amazing performances in films such as Pyar Ki Jeet (1948), Badi Behen (1949), Pardes (1950) and Waqt (1965) and he was also among the celebrities who served the nation. Rehman was a pilot in the Royal Indian Air Force but he quit his job to try his luck in the acting world and the decision wasn’t regrettable as he entertained people for almost three decades.

Rudrashish Majumder starred in many Bollywood movies like Chhichhore, Hawa Singh, Mrs Undercover and Jersey and also appeared in several commercials like Coca-Cola and MG Hector but not many know that this talented actor also joined the Indian Army. Majumder is a graduate of the National Defense Academy and the Indian Military Academy (Dehradun). Majumder joined the force in 2011 and retired as a major in 2018. He recently starred in the film Jersey with Shahid Kapoor.

Achyut Potdar was in the Indian Army | Photo: Twitter

Remember the teacher in 3 Idiots teaching machines and his dialogue “Arey, kehna kya chahte ho?” did that go viral? Yes, we are talking about Achyut Potdar who gave notable performances in films like Dabangg 2, Lage Raho Munna Bhai, Parineeta and many more for four decades. Before starting his career in Bollywood, Achyut began his career as a professor in Rewa, Madhya Pradesh later served the nation as a Captain in the Indian Army, retiring in 1967. He began his career in the film industry at the age of 44.

Mohommed Ali Shah was in the Indian Army | Photo: Twitter

Indian actor Mohammed Ali Shah is a nephew of veteran actor Naseeruddin Shah who has starred in several films such as Agent Vinod, Haider and Yaara but before acting in Bollywood Shah served in the Indian Army and has been at the Indo-Pakistani for two years Border stationed also fought the insurgency in the Northeast for three long years. In fact, he earned his role as an army officer in the film Haider because of the time he spent serving the nation.