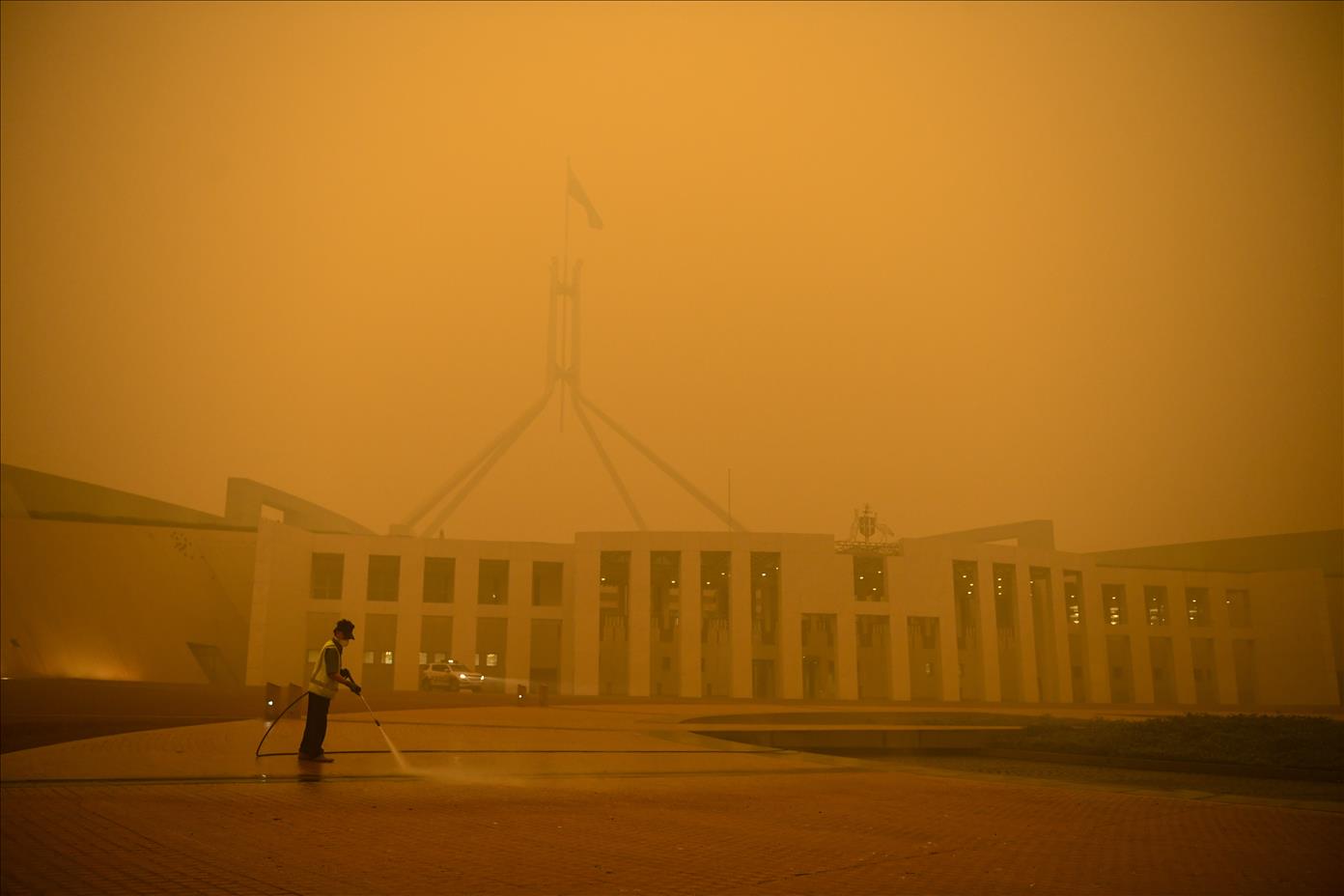 Time is fast running out for the Morrison administration to announce a new climate policy ahead of the United Nations COP26 climate talks in Glasgow next month. At eleven o’clock, the government appears ready to announce a net zero emissions target for 2050 and possibly stronger ambitions by 2030.

Notoriously, Australia has so far failed to maintain a meaningful climate regime. As my latest research has shown, the federal government’s inaction has been a particularly effective handbrake on progress. Therefore, new climate goals and a solid plan to achieve them would be welcome.

The challenge now for the Morrison administration is to turn Australia’s divided climate divide into history. The mistakes of the past must be avoided. A new approach is needed, one that hits net zero, with a target for 2030 that signals Australia’s intention to join the world and take climate change seriously.

Much can be learned from analyzing Australia’s poor record, particularly from the divisive “climate wars” that have plagued federal politics over the past decade. But Australia’s political stubbornness goes back a long way, at least 30 years.

To help us understand what’s at stake for Australia in Glasgow and beyond, here’s a quick refresher.

In her detailed history of climate awareness in Australia, the scientist and journalist Maria Taylor determined through document and interview-based analyzes that the Australian public was best informed about the urgent need for action in the world about global warming as early as the late 1980s.

She recalls that the Hawke Laboratory government set a goal of reducing emissions by 20% below 1988 levels by 2005. However, under the Keating Labor administration, momentum was lost with the economic recession and concerns about the cost of protecting the climate grew – especially from the extractive industries.

The late 1990s under the Howard coalition government were also doomed. At the 1997 Kyoto climate negotiations, Australia called for a target that would allow 2012 emissions to be 8% higher than 1990 levels, while industrialized countries except Norway and Iceland agreed to cut their emissions. Australia threatened to exit the negotiations if it was not approved.

Although Australia’s demands were met, the Howard government was the only industrial nation other than the United States to ratify the Kyoto Protocol.

It introduced a renewable energy target and proposed a carbon tax before the 2007 elections were lost as a drought-gripped Australian public sought stronger action on climate change. 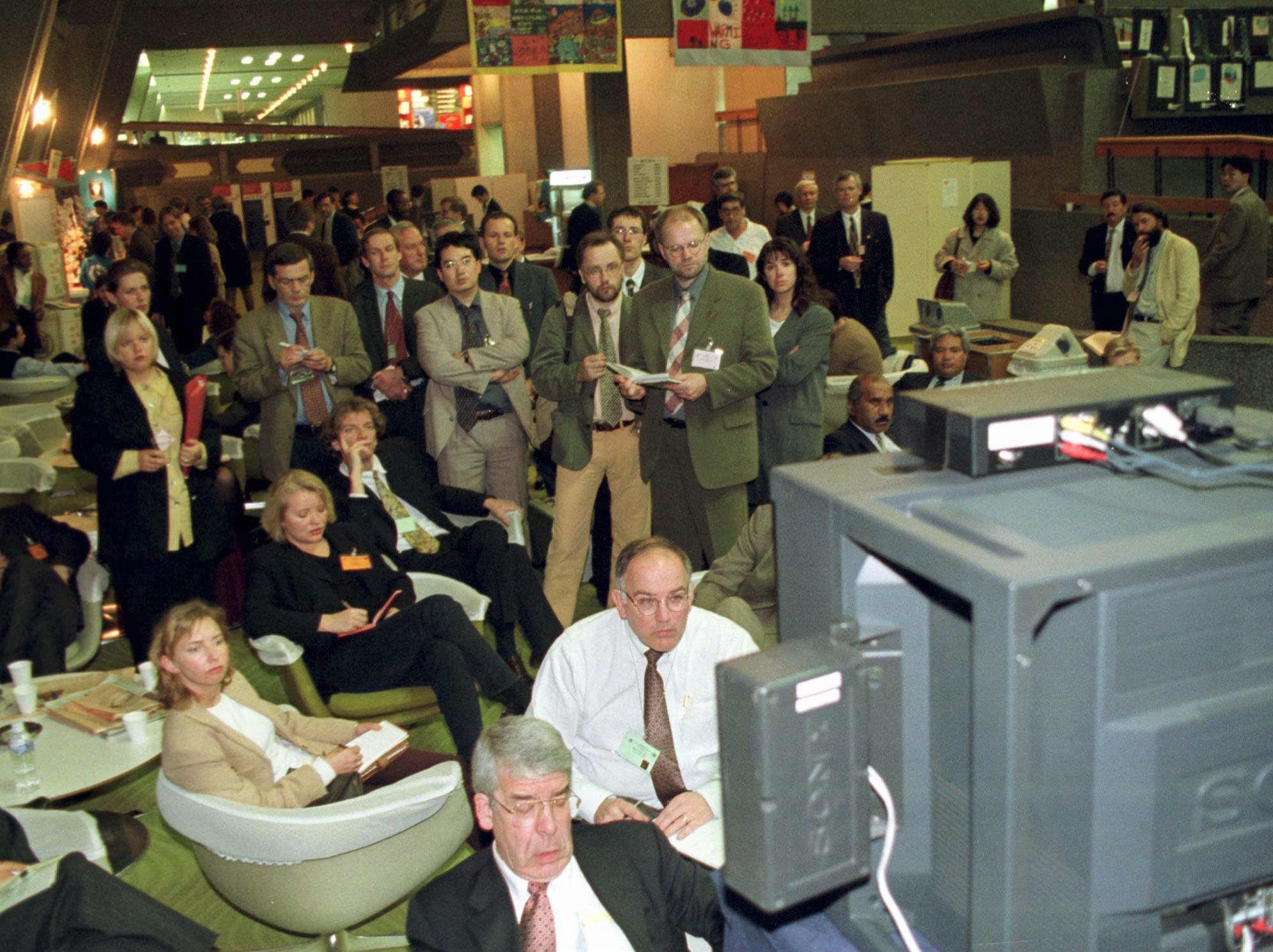 Reporters crowd in front of a television screen broadcasting a press conference on the UN climate conference in Kyoto on December 9, 1997. AP Photo / Katsumi Kasahara

The Rudd Labor government ratified the Kyoto Protocol in 2007. It also tried to set a carbon price in the form of the Carbon Pollution Reduction Scheme (CPRS). But the bill couldn’t pass parliament after the coalition and the Greens blocked it in the Senate.

In 2011, the Gillard Labor minority government passed the Clean Energy Act, which was negotiated with its Crossbench supporters. This created a carbon pricing mechanism that critics have mistakenly called a “carbon tax”.

Read more: 25 years ago the Australian government promised deep emissions cuts, and yet we are still here

The coalition opposition, led by Tony Abbott, circled. Always a climate pugilist, Abbott pledged to “cut the tax” and undo other advances in climate policy. He put these promises into office in the 2013 federal election.

The Abbott government was the first in the world to abolish a carbon price. Other advances such as the Climate Expert Commission, the promotion of wind and solar energy and measures to promote energy efficiency had also disappeared. 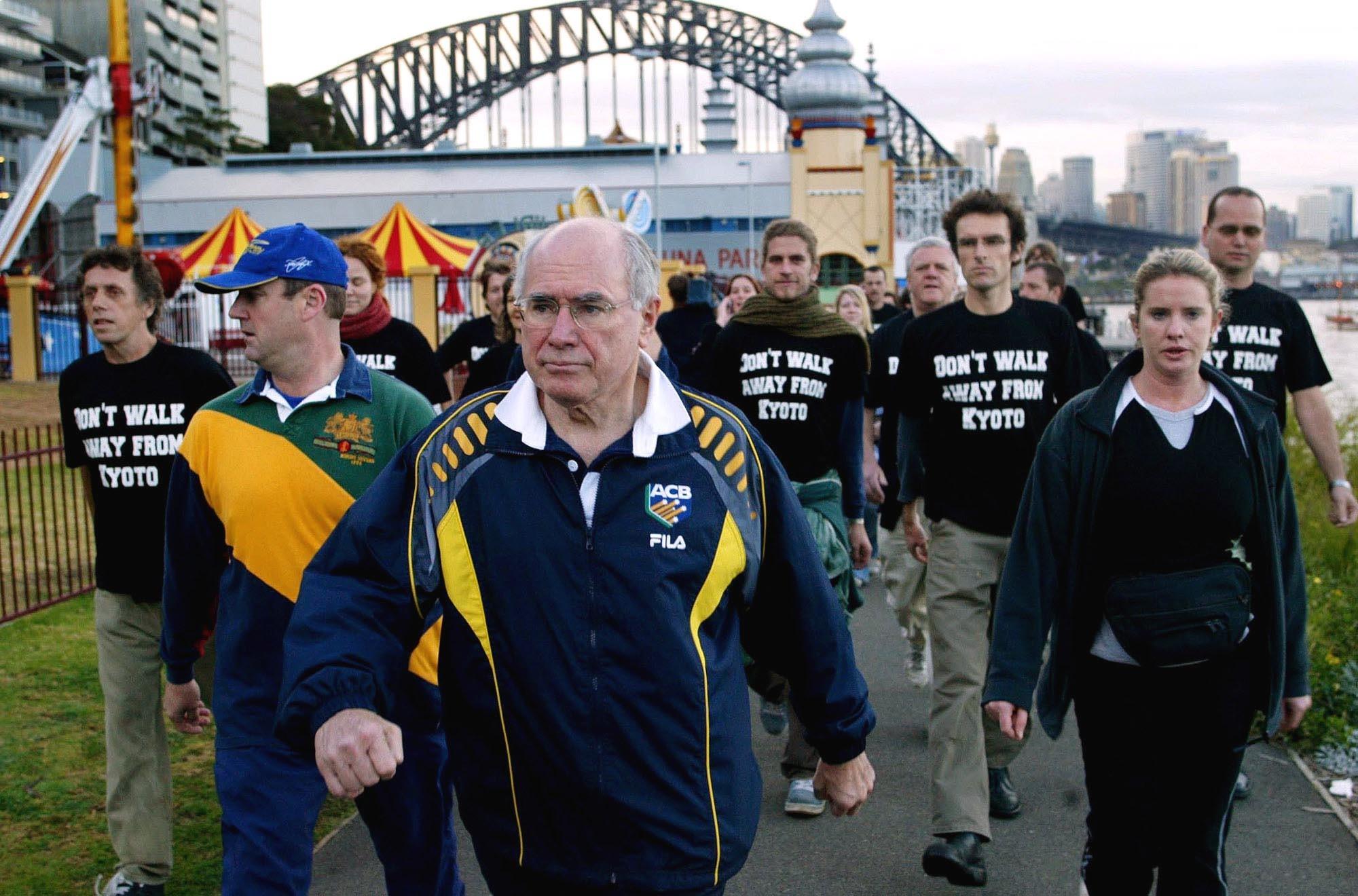 The dismantling of the new government has closed Australia’s opportunity to act on climate change. But the world went on. By 2015, international heads of state and government called for an end to coal and drastic political measures under the Paris Agreement.

Abbott was ousted as Prime Minister in 2015 after serving two years. But its dismantling efforts dramatically slowed the transition from fossil fuels to clean energy, which was proceeding rapidly in other advanced industrialized countries.

Abbott’s successor, Malcolm Turnbull, understood this. But his efforts to promote climate change were thwarted by internal party politics and dissent, and in 2018 he too was ousted.

It’s up to Scott Morrison

Given this tumultuous history, Prime Minister Scott Morrison has been careful not to signal abrupt climate change. But now that the international summit is only weeks away, he’s staring at the coalition naysayers in the National Party who promise a net-zero target by 2050. 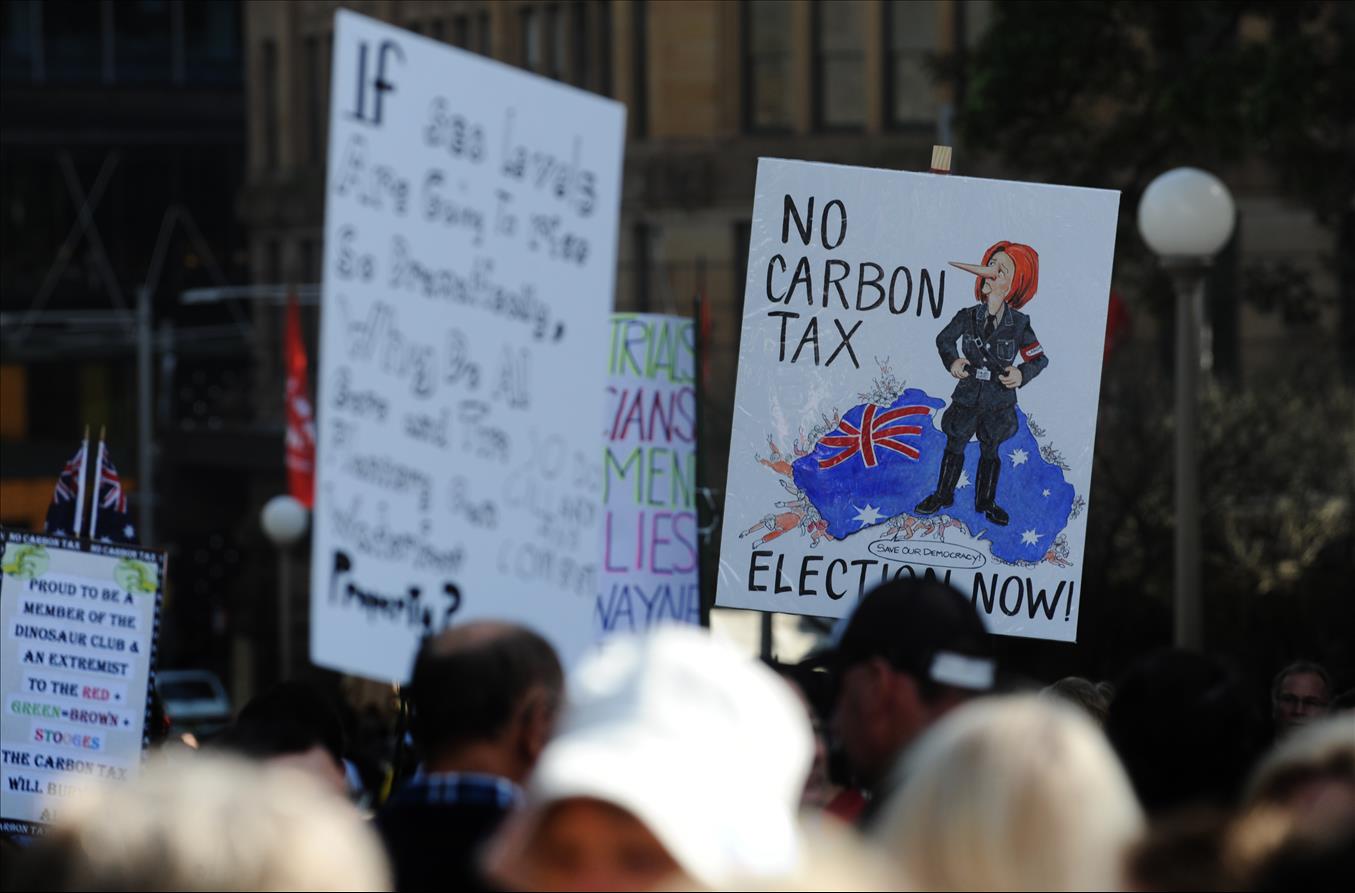 Up to 1,000 demonstrators take to the streets in Sydney to protest against the government’s so-called CO2 tax of 2011. AAP Image / Dean Lewins

The political discussion about climate change is finally changing. Even the conservative federal treasurer Josh Frydenberg recently articulated the economic costs of not making the low-emission switch.

But 30 years of inactivity have left Australia with no long-term goal or an effective 2030 target to guide interim measures, including an exit from coal. So Australia risks being left behind and missing out on jobs and growth through a low carbon transition.

Read more: What is COP26 and why does the fate of the earth and Australia’s prosperity depend on it?

To see a bone-dry change in Australia’s climate response, the government must not repeat the mistakes of the past: politicizing climate change, delaying the transition to clean energy, sticking to ineffective measures and offsetting rather than reducing emissions.

Instead, it should put aside partisanship and develop lasting economic and energy transition plans for affected communities, such as drought-prone, low-lying coastal communities and coal workers who will lose their jobs. These plans cannot be reversed for political reasons, as we have seen in the past.

Jurisdictions such as the European Union are planning or considering trade sanctions such as CO2 limit adjustments for nations that do not reduce emissions. And stranded fossil fuel investments are inevitable as the market shifts towards renewables. It is clear that inaction on climate change is costing Australia dearly.

Disclaimer: MENAFN provides the information “as is” without any guarantee. We assume no responsibility or liability for the accuracy, content, images, videos, licenses, completeness, legality, or reliability of the information contained in this article. If you have any complaints or copyright issues related to this item, please contact the above provider.

The ‘Attack on Titan’ manga ended – Did [SPOILER] Survive the rumble?