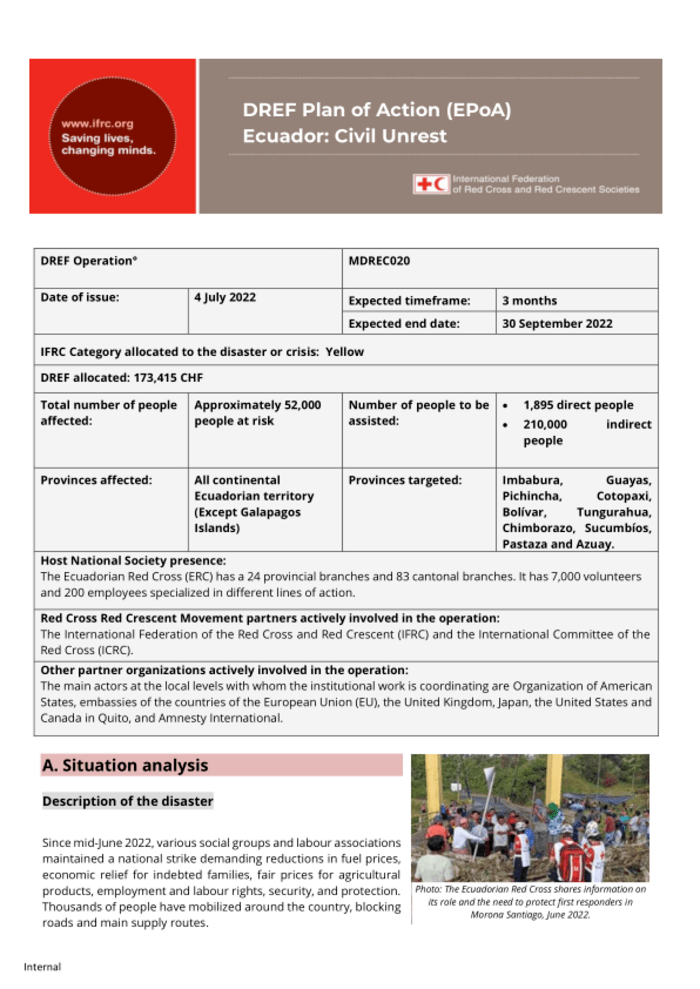 description of the disaster

Although mobilizations in the provinces of Sucumbíos, Cotopaxi, Pastaza and Los Ríos began peacefully, the situation quickly deteriorated. On June 17, 2022, the Presidency of the Republic issued Executive Decree No. 455 declaring the state of emergency1 due to serious internal unrest in the provinces of Cotopaxi, Imbabura and Pichincha and the curfew in the city of Quito.

The protests took place in 22 provinces and more than 70 cantons with more than 70 concentration points and road blockades. The presence of protesters is more representative in the provinces of Imbabura, Pichincha, Cotopaxi, Bolívar, Tungurahua, Chimborazo, Azuay, Pastaza and Guayas. Furthermore, in the case of Sucumbíos, the protesters have focused their interest on the occupation of the Limoncocha oil station building. Public and private property damage, arrests and injuries were reported by the media and social media as a result of these demonstrations. According to a quick assessment of the situation by the Ecuadorian Red Cross, around 52,000 people are estimated to be affected nationally, which corresponds to the more vulnerable protesters. According to the Confederation of Indigenous Nationalities of Ecuador (CONAIE), there were 280 injured, five dead, eight missing and 158 arrested in different parts of the country. According to the government ministry, an estimated 100 police officers and 25 military personnel were injured in the conflicts.

On June 24, 2022, the unrest intensified, leading to a surge in the number of injured. As a result, the Ecuadorian Red Cross (ERC), although already supporting and monitoring the situation, deployed its response operations, mobilized personnel and resources to help the affected people, thus beginning its emergency activities.

Due to the high level of demand for support that the ERC provided to the community (Table 1 and Graph 2), the ERC has expanded its response to continue supporting affected people for the duration of this event.

On June 30, 2022, CONAIE decided to end the strike as they had talks with the national government and agreed on some actions. A dialogue table has been set up, which will last 90 days, to deal with the public demands. The alert for new mobilizations is maintained in case the dialogue fails.