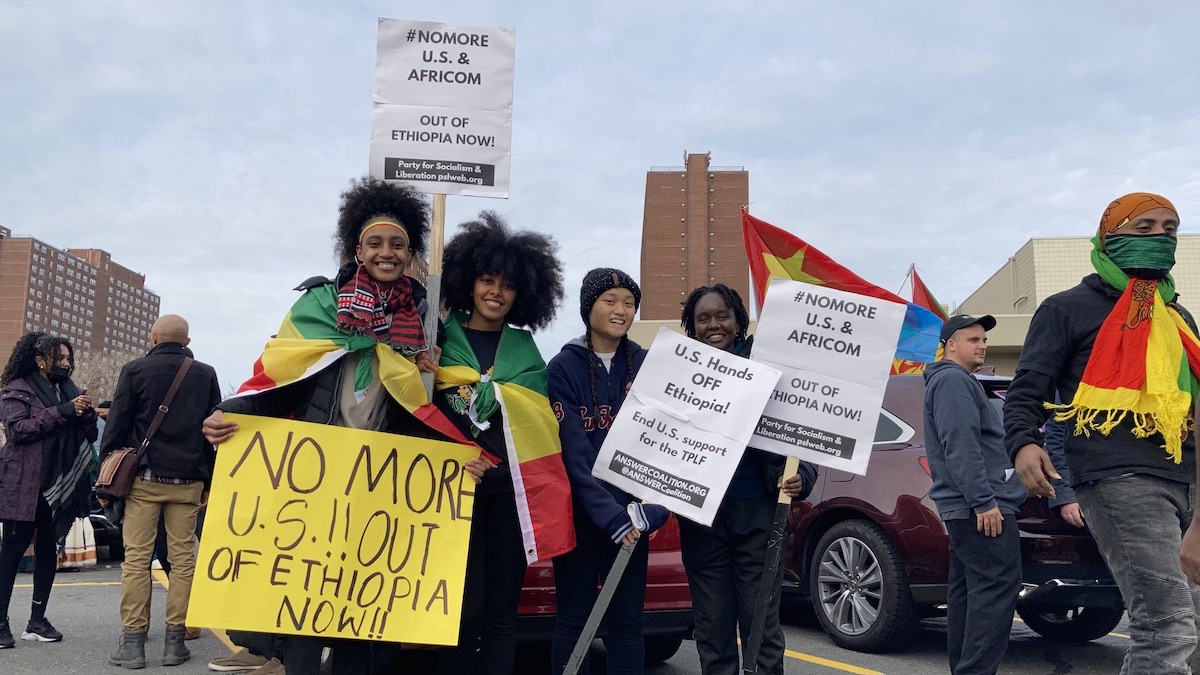 A coalition of activists from the Ethiopian-American and Eritrean-American communities working with @HornofAfricaHub coordinated local action in the United States and around the world on November 21 to call for an end to US interference in the Horn of Africa. Many in the Ethiopian and Eritrean diaspora believe that the U.S. government does not respect their country’s sovereignty because the United States unilaterally supports the Tigrayan People’s Liberation Front, which started an uprising last year against the Ethiopian government and Eritrea as good. The ANSWER Coalition and the Black Alliance for Peace supported the demonstrations called by the Horn of Africa Hub, which took place in more than 20 US cities. Liberation News was on site for many of these campaigns.

The true nature of the conflict in Ethiopia is completely skewed in US corporate media. In reality, this is not the case when a central government is waging a “genocidal” war against an ethnic minority. The TPLF started its revolt against the central government after it was finally ousted from its dominant position in the politics of the country. For nearly 30 years, the TPLF ruled the country’s government institutions and much of the top leadership of the armed forces.

After a revolution in 1974 overthrew the monarchy of Ethiopia, power was taken over by a new government dedicated to building a socialist society and forming alliances with the Soviet Union and Cuba. But opposition movements formed and waged a civil war that culminated in 1991 with the overthrow of the socialist government by an alliance led by the TPLF. TPLF chief Meles Zenawi became the leader of the country and ruled for the next 21 years, forming a close relationship with the United States. In 2006, the TPLF-led Ethiopian government invaded Somalia, a move strongly supported by the United States.

During the reign of the TPLF, the US government did not lift a finger to support Ethiopians who protest for democratic and civil rights, but has now appointed itself the supposed guardian of human rights in the country. Today the Biden government also sanctions the Eritrean government while helping Ethiopia fight the TPLF insurrection.

After three decades of TPLF rule, Abiy Ahmed emerged as Prime Minister in 2018 and pledged to overcome longstanding internal conflicts in Ethiopia and the wider region in order to unlock the country’s economic development potential. This included a historic peace agreement between Ethiopia and Eritrea at the end of 2018, which ended the decades-long war. These social gains are in serious jeopardy should the TPLF prevail in this civil war, and Washingtonâ€™s support for the insurgents in this conflict is set to regain control of the Ethiopian government. This civil war has neo-colonial patterns.

As hundreds of people gathered, Eugene Puryear of the ANSWER coalition addressed the crowd: â€œWhat is the crime of Ethiopia? The crime is to seek unity in the Horn of Africa and unity in the African continent. US policy has been very consistent over the past 40 years when it comes to the Horn of Africa – keep it divided … Whether you like the US, whether you hate the US But anyone who wants to act independently is a problem and it must be prevented. ”

One of the largest demonstrations took place in Seattle, where thousands of Ethiopians and Eritreans gathered in Powell Barnett Park to speak and then marched through the community.

Around 800 people, mostly from the Ethiopian and Eritrean diaspora communities in Denver and Aurora, CO, marched to the Aurora Municipal Center. Speakers campaigned for African unity and self-determination, called on the US to stop all interference in Ethiopia and Eritrea, and denounced false narratives that dominate the US media. A demonstrator shouted to the crowd: â€œNo more intervention! We saw how you helped Libya! We saw how you helped Afghanistan! Hands off Ethiopia! Hands off Eritrea! Hands off the Horn of Africa! “

In Cambridge, Massachusetts, 400 Ethiopian and Eritrean Americans gathered at 99 Sherman St. to call for unity to oppose US support for the TPLF, a sectarian group that ruled the country for 30 years.

When asked about the sanctions, the Eritrean participant Yohannes Daniel said Liberation News “The US is using Eritrea as its first scapegoat – and warning Abiy that he’s next.”

Mahderekal Regassa said: â€œI know what is what. On the news, they turn it around; it’s the exact opposite. Abiy Ahmad has freed us from 30 years of tyranny under TPLF and is working towards real democracy. TPLF prevents that and destroys our country and kills so many innocent lives with the help of the USA! ”

Seble Tefera, an Oromo and Amhara ethnicity participant, expressed concern that non-Tigrayan Ethiopians would be essentially â€œstatelessâ€ and face ethnic discrimination when the TPLF regained control, adding that â€œnobody wants the TPLF anymoreâ€.

Another protester, Yoftahe Gebru, said in a speech: â€œCNN is waging wars! They don’t come out right away and say it, but they make wars! We know your game! â€He went on to say that he originally believed CNN when they covered Afghanistan, Libya and Iraq, but now he sees it for what it is. “I’m sorry for Afghanistan, I’m sorry for Libya, I’m sorry for Iraq!”