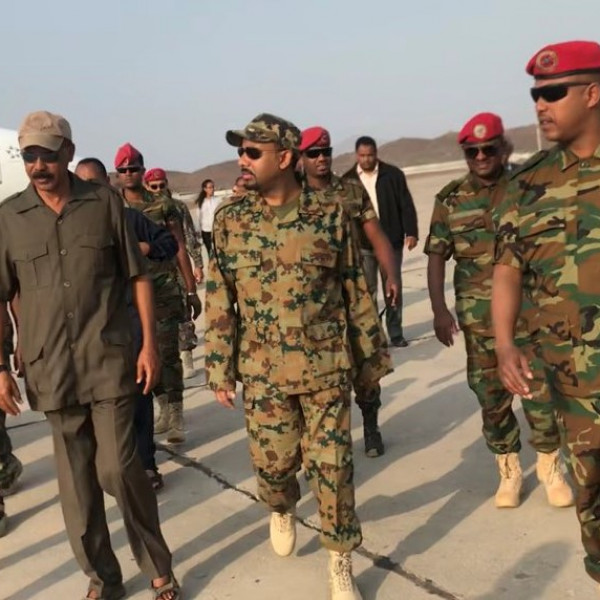 Ethiopia, the second most populous country in Africa, has been in a chaotic situation and a great deal of uncertainty since the seismic confrontation between the Ethiopian National Defense Forces (ENDF) and the Tigray Defense Forces (TDF) erupted in November last year.

Militarily, Ethiopia is a hegemonic state in the region. Therefore, if the ongoing conflict continues, it can metastasize and destabilize the Horn of Africa region, particularly Somalia, where huge Ethiopian troops are present as part of the AMISOM mission.

Abiy, the embattled prime minister, took power in April 2018 after huge demonstrations started from the Oromo region and later spread to the Amhara region against Tigray rule, while the EPRDF coalition party ruled Ethiopia closely for three decades.

The two states had been at odds for decades over longstanding border disputes. The Somali region, currently under Ethiopian rule, is the main culprit for this deep-seated resentment between them. In 1954 the British colonial administration ceded the Somali region to Ethiopia. Since then, the two countries have waged two vicious wars in 1964 and 1977.

The socialist governments of Ethiopia and Somalia disappeared in 1991, immediately after the collapse of the former Soviet Union in the same year. The difference was that in Ethiopia former Prime Minister Mengistu was overthrown by the Tigrayan Peoples’ Liberation Front (TPLF), Mengistu accepted “soft landing” and the TPLF did not destroy government institutions, while in Somalia the late President Siadbarre refused to transferring power and waging an all-or-nothing war against the rebels that led the country into a grueling civil war.

The protracted civil war in Somalia was fought by relentless warlords who killed innocent people out of clan enmity. During the 1991-2006 civil war, Ethiopia provided arms and ammunition to the callous and ruthless warlords of Somalia.

This has taken the already deeply rooted resentment towards Ethiopia to extremes. In 2007-2009, Ethiopia supported the lame Somali government led by the late President Abdullahi Yusuf Ahmed, and in 2007 Ethiopian troops captured the capital Mogadishu, killing civilians and destroying enormous property.

Although the Ethiopian forces had permission from the legitimate Somali government, the common people did not consent to their presence in Mogadishu. Surprisingly, the incumbent Somali government, led by its distinguished President Mohamed Abdullahi alias Farmajo, changed the historical relationship between the two countries.

The current Prime Minister of Ethiopia, His Excellency Abiy Ahmed, paid a visit to Mogadishu in July 2018. The two heads of state and government had their say and said Ethiopia would invest in the ports of Somalia. Since then, the relationship between the two leaders has been strengthened. Aside from the two leaders, Somalia’s dissenting voices and talking heads criticized the latent ties between President Farmajo and Prime Minister Abiy.

The most controversial issue was when the incumbent government in Somalia stopped the Mirraa (khat) from Kenya and replaced the one from Ethiopia. With the two heads of state Ethiopia and Somalia closely linked, diplomatic relations between Kenya and Somalia deteriorated dramatically. Kenya has hosted most of the Somali refugees since 1991.

International partners and their effects

The relationship between the west and Ethiopia goes back a century. During the second battle for Africa in 1897, Menelik, the pioneer of the new Ethiopia, received a special envoy “Rodd Mission” from the British Queen Victoria. Since then, their connections bloomed and prospered.

When the former socialist government in Ethiopia was overthrown by the rebel groups in 1991, historic diplomatic relations between the West and Ethiopia were restored. Another diplomatic dispute was observed when the Abiy government postponed the national elections due to take place in September last year.

On the other hand, the situation became persistent when the Prime Minister called a military confrontation against the troubled region (Tigray) on November 4, 2020. This audacity that the Prime Minister took on himself also raised more questions than answers. Here, too, the United States, Britain and the European Union expressed concern about this conflict and called on the warring sides to negotiate, weigh and compromise. But all efforts that should refrain from confrontation were in vain.

As a result, the European Union and the US have cut the aid budget for Ethiopia. But this action to cut the support fund did nothing to change Abiy’s intention. Besides the Tigray war, the greatest impetus for the current stalemate between the West and Abiy’s government is Ethiopia’s decision to accelerate the filling of the dam and Eritrea’s participation in the war against the Tigray region. Huge human rights organizations reported that Eritrean armed forces, Amhara militias and ENDF have committed crimes against humanity, including ethnic cleansing, rape, caning and all families of human rights abuses.

On the other hand, the Tigray Defense Forces (TFD) and Oromo Liberation Army (OLA) have made it known that Turkey, the United Arab Emirates, Iran, China and Russia are offering drones to Abiy’s government. And these drones were aimed at civilians in the Tigray and Oromia regions. But Abiy’s government has demolished and refuted such allegations. China and Turkey are the largest investors in Ethiopia, while Turkey aims to expand its influence in the region. As such, Ethiopia is prone to this multipolar policy.

The ongoing conflict in Ethiopia will continue for some time if the international community insists on different support for the warring parties. But if the West, which is Ethiopia’s longest ally, and China-Turkey, which are the first and second largest investors in Ethiopia, engage in mediation between the warring parties, the conflict could be shorter.

It appears that the Tigray War opened another Pandora’s box. Because the region was already struggling with persistent droughts, locusts and famine. Now the conflict in Ethiopia is the result of yet another humanitarian influx that the region can no longer afford.

The views expressed in this article are the author’s own views and do not necessarily reflect Garowe Online’s editorial guidelines.