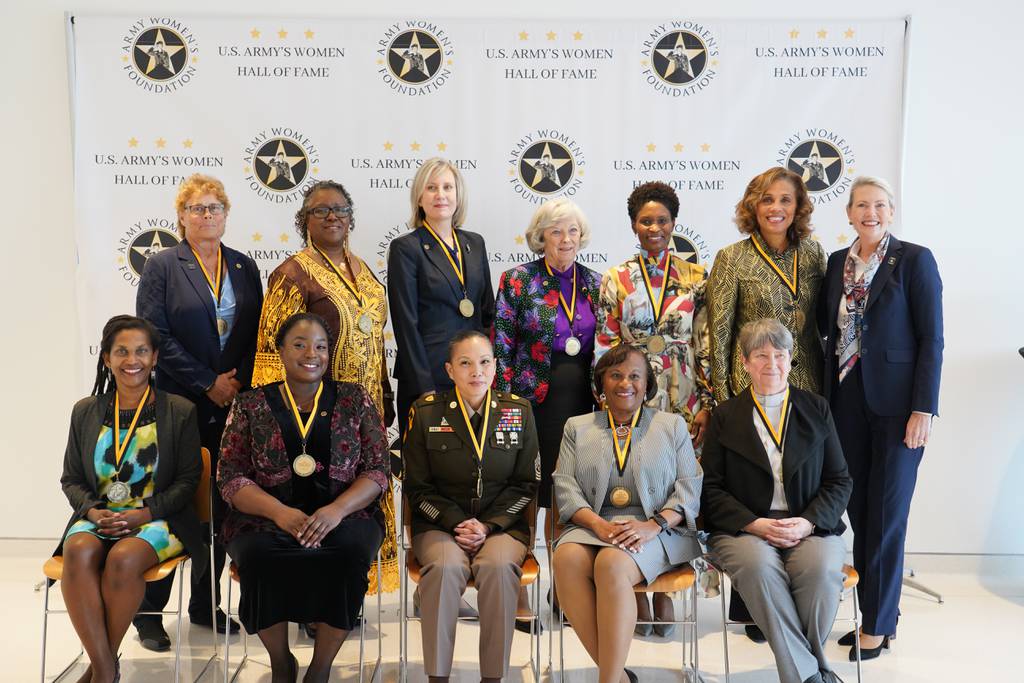 FORT BELVOIR, VIRGINIA — Some rose to the rank of general, some took their passion for the military beyond uniform, most broke multiple barriers, and all of them were women serving in the U.S. Army.

The honored women are critical members of the army “who have changed the course of history through their service”.

The Army Women’s Foundation is a nonprofit organization established in 1969 that recognizes women “who have served in the Army or Armed Forces and rendered outstanding service” through its honors and scholarship programs.

They make these recognitions through induction into the foundation’s Hall of Fame and also through “special recognition” awards given to women service members, veterans and those who have supported or contributed to women in the army.

Retired Lieutenant General Nadja West came from a service family. Her father enlisted in a separate army in 1939. Raising a family of a dozen children, her father and mother adopted West while stationed in Germany.

West watched as nearly all of her older siblings, male and female, joined in the service. Her brother, a 1976 graduate of the US Military Academy at West Point, urged his little sister to consider the academy when it opened its doors to women that same year.

Still a teenager, she had to wait a few years, but found her way to West Point and a career spanning decades, serving as the first woman of color to serve as an Army Division surgeon in 1999, then the first woman to be selected as a Joint Staff Surgeon in 2014, advising the Chairman of the Joint Chiefs of Staff on medical matters.

West rose to three stars and served as the US Army’s surgeon general from 2015 to 2019.

In her speech on Tuesday, she paid a special tribute that personally touched some of the more than 100 listeners.

“I want to thank the women in the class of 1980 (West Point), just think, there weren’t any women before them who showed them it was possible,” she said.

One of those graduates who rose in recognition was an honored colleague — retired Lt. Col. Carol A. Barkalow.

The retired colonel caused laughter with her comments.

“I came to West Point when I was 17, I didn’t understand what the big deal was,” she said. “I had survived the torture of my three older brothers. So it wasn’t a problem.”

But joking aside, Barkalow told the Army Times in an interview prior to the event that, along with women in her class and service in the Army, she faced a range of discrimination both before and after she joined in 1976. One such hurdle was that entire professional fields were closed to all women.

As a young officer, Barkalow led an air defense unit in Germany in the 1980s, but was barred from performing some duties in the unit because she was a woman.

She marvels at the achievements of current female soldiers.

“If I could have been a candidate for Ranger School, I would be there in a heartbeat,” the collegiate athlete said.

Barkalow and her wife have continued their commitment to the military and veterans with a nonprofit organization called Heaven on Earth, which they founded in 2013 to serve homeless veterans in the Tampa Bay, Florida area.

Since 2009, nearly 100 people have been inducted into the Hall of Fame. This year there are 13 individuals, along with three recipients of special recognition awards. Entire units or categories have also been recognized in recent years, as in 2014 with the 14th Women’s Auxiliary Corps Band, the last all-female military band. In 2012 and 2013, the foundation honored army women who served in the Vietnam and Korean Wars, respectively.

This year’s initiates are the following:

Retired Colonel Kirsten Brunson saw the Army’s “Be All You Can Be” ads in the 1980s and took them literally.

The University of Maryland graduate was commissioned into an ROTC program at Howard University and then delayed his service to attend the University of California, Los Angeles Law School. In 1992 she joined the Judge Advocate General Corps.

The commercial paid off.

What probably started as a brief stint to serve their country and get a legal education grew into a 22-year career and so much more.

Despite her own accomplishments, Brunson told the Army Times she never imagined being honored by the foundation.

“It’s hard to understand, especially when I look at the women who have come before,” she said.

Staff Sgt. Stephane Mitchell recalls when she was just 9 years old and an Army recruiter came to her house for her brother.

Both her grandfathers and one uncle had served in the army. But seeing the uniform right there sparked a drive in the young girl.

“I was just fascinated,” she says. “That’s something I want to do.”

Years later, as she was finishing school and considering service, a die-hard Army recruiter caught her attention again. This led to a career in the army and its medical corps.

While deployed to Afghanistan, Mitchell established a program to help other soldiers improve their ASVAB scores. It was so successful in raising more than 60 Soldiers to improve on those results that it became a brigade program and was later taught by all career advisers in the unit.

“We’re still doing a lot of firsts,” she said.

She asked why she was nominated for the Hall of Fame when she learned she would be honored.

Mitchell said her own mentor, an advisor she followed in the latter half of her career, told her it was for the work she’d done over the years, both in the Army and afterwards.

Looking back, it’s not the deployments or promotions that stand out, but the individual work with her soldiers, she says.

“The impact I had doesn’t just stay with them,” she said. “It’s like a ripple effect, it goes out.”

Todd South has written in several publications on crime, the courts, government and the military since 2004, and was named a 2014 Pulitzer finalist for a co-written project on witness intimidation. Todd is a Navy veteran of the Iraq War.