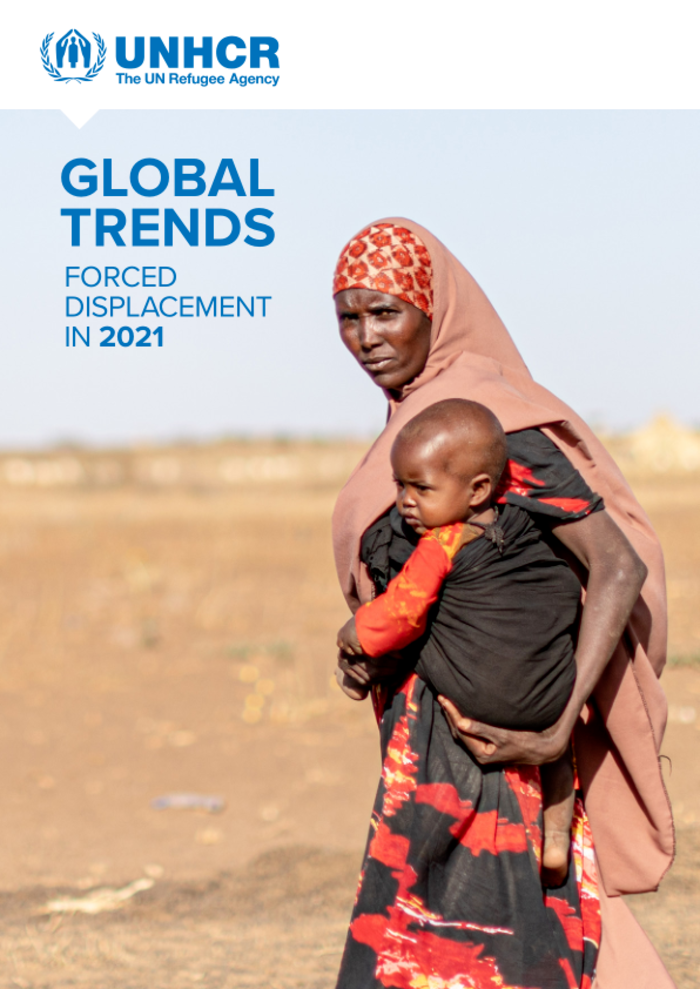 “For the past decade, the numbers have been rising every year. Either the international community comes together to take action to address this human tragedy, resolve conflicts and find lasting solutions, or this horrifying trend will continue.”
Philip Grandi
UN High Commissioner for Refugees

The number of people forced to flee their homes due to persecution, conflict, violence, human rights abuses and events seriously disrupting public order continued a worrying multi-decade increase, rising to 89.3 million by the end of 2021. This is more than double the 42.7 million people forcibly displaced in late 2012 and represents a sharp 8 percent increase from almost 7 million people in just 12 months. As a result, at the end of 2021, more than 1 percent of the world’s population was – or 1 in 88 people – forcibly displaced. At the end of 2012, it was 1 in 167. In 2021, about 1.7 million people crossed international borders seeking protection and 14.4 million new internal displacements were reported. This is a dramatic increase from last year’s total of 11.2 million. While internal displacement was significantly higher in 2021 than in recent years, the number of asylum seekers crossing international borders remained subdued compared to pre-pandemic levels as health-related border and travel restrictions remained in place in many places. Access to asylum improved over the year and most countries that remained closed to people seeking international protection at the end of 2021 had introduced at least some adjustment elements, albeit to varying degrees, rather than keeping their asylum systems fully closed. The year was perhaps most notable for the sheer number of existing conflicts that escalated and new conflicts that flared up (see Map 1). According to the World Bank, 23 countries with a total population of 850 million people were facing high or medium-intensity conflicts in 2021. The number of countries affected by conflict has doubled in the past decade, with women and children disproportionately affected by deep-seated discrimination and extreme vulnerability.

In Afghanistan, events leading up to the Taliban takeover of Kabul in August 2021 led to displacement within the country and to neighboring countries. The number of internally displaced people rose for the 15th consecutive year, although more than 790,000 Afghans returned during the year.

The conflict in the Tigray region of Ethiopia resulted in at least 2.5 million other people being internally displaced, with around 1.5 million returning home during the year.

Violent insurgency in Africa’s central Sahel continued to result in internal displacement, particularly in Burkina Faso. The main causes of conflict in the region include extreme poverty and chronic underdevelopment. The climate crisis, with temperatures in the region rising 1.5 times faster than the global average, is further exacerbating the humanitarian situation.

In Myanmar, the military takeover in February 2021 triggered widespread violence and forced many people to flee.

With renewed displacement from Venezuela, mainly to other Latin American countries, the number of Venezuelans displaced abroad also grew by more than half a million.

In addition, the Democratic Republic of the Congo, Nigeria, South Sudan, Sudan, the Syrian Arab Republic and Yemen saw an increase of 100,000 to 500,000 internally displaced persons during the year.

While this report focuses on forced evictions in 2021, it is impossible to ignore more recent events in early 2022. The war in Ukraine has attracted global attention as, at the time of writing, more than 7 million Ukrainians have been internally displaced and more than 6 million refugee movements have been registered out of Ukraine. It is one of the biggest flight crises since World War II and certainly the fastest. It should be remembered that refugees fleeing Ukraine are being taken in by mostly high-income European countries. They have also been offered temporary protection status by European Union member states, with more than 2.8 million refugees registering for such schemes.18 Many of the 36.2 million refugees, asylum-seekers and others who have been forced to cross borders flee, were already displaced by the end of 2021 faced conditions that were far worse.

For example, people forced to flee are hard hit by food crises as many refugees, asylum seekers and people displaced within their countries struggle to feed their families. In Afghanistan, for example, a staggering 55 percent of the country’s population did not have enough to eat. Globally, in 2021, 82 percent of internally displaced persons (IDPs) and 67 percent of refugees and asylum-seekers came from countries facing food crises. Around 40 percent of refugees and asylum-seekers were housed in countries facing food crises at the end of 2021.

There is also a clear equity gap in the rollout of COVID-19 vaccinations. As of March 2022, only 1 percent of the 10.9 billion doses administered worldwide were administered in low-income countries. That means there are still 2.8 billion people around the world waiting for their first shot. Therefore, resources are still needed for immunization-related activities and to ensure last-mile vaccine delivery.

Before the war in Ukraine, the global economy was expected to recover to pre-pandemic growth rates between 2022 and 2024. Recent forecasts are more pessimistic, mainly due to the resulting impact of inflationary pressures on food and fuel. Low-income countries, which host nearly a quarter of the world’s refugees, and more than two-thirds of people displaced within their countries are likely to be disproportionately affected. This will exacerbate the immediate and longer-term socio-economic challenges faced by displaced people.

In last year’s Global Trends report, UNHCR predicted that “the question is no longer if forced displacement will exceed 100 million people – but when”. The when is now. With millions of Ukrainians displaced at the time of writing, as well as further displacements this year, particularly in Burkina Faso and Myanmar, the total number of forced displacements now exceeds 100 million people (see Figure 1). That means 1 in every 78 people on Earth has been forced to flee — a dramatic milestone few would have anticipated a decade ago.