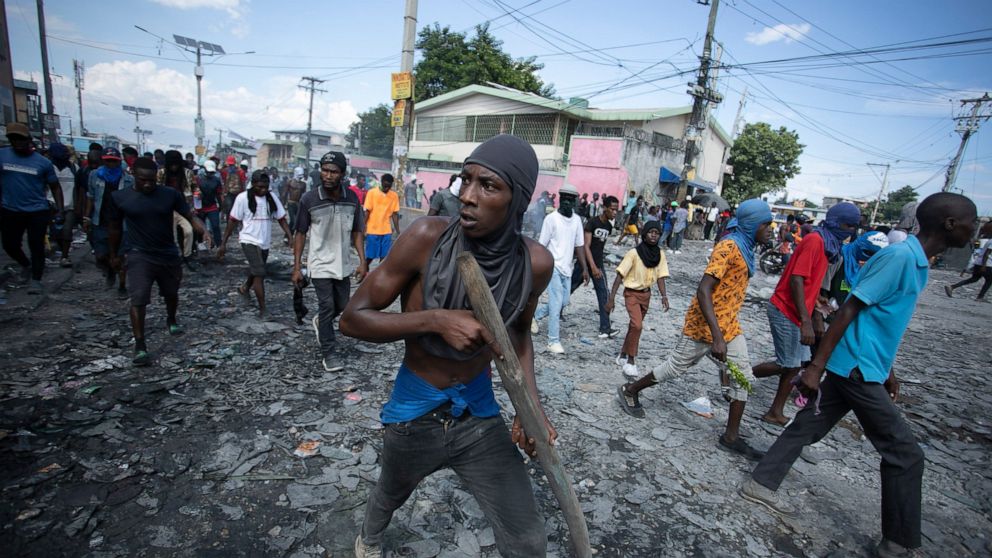 PORT AU PRINCE, Haiti — According to a document released on Friday, the Haitian government has agreed to request help from international troops as gangs and protesters paralyze the country and supplies of water, fuel and basic goods dwindle.

The document, signed by Prime Minister Ariel Henry and 18 senior officials, said they were alarmed at “the risk of a major humanitarian crisis” threatening the lives of many.

It authorizes Henry to require international partners “to immediately deploy a specialized force in sufficient numbers” to halt the nationwide crisis caused in part by “criminal acts by armed gangs.”

“It is imperative to resume activities to avoid complete suffocation of the national economy,” the document said.

It was not clear if the request was officially filed, to whom it would be addressed and if it would involve the activation of United Nations peacekeeping forces, whose mission ended five years ago after 11 troubled years in Haiti.

On Friday, the US embassy warned that “US citizens should leave Haiti now given the current health and safety situation and infrastructure problems.” It also authorized the temporary departure of government employees and their families.

US State Department deputy spokesman Vedant Patel said earlier in the day that the US is considering a request for a humanitarian corridor to restore fuel distribution in Haiti and is coordinating with Haiti’s prime minister and other international partners to determine how best to provide additional support.

“We condemn in the strongest terms those who continue to block the distribution of fuel and other essential necessities to Haitian businesses,” he said.

Patel declined to address the question of where the troops to enforce the corridor might come from, saying that considerations are still in the early stages.

The petition comes after Luis Almagro, secretary-general of the Organization of American States, met with officials including US Secretary of State Antony Blinken and Haitian Foreign Minister Jean Victor Généus on Thursday to discuss the country’s deteriorating situation.

Almagro tweeted late Thursday that Haiti “needs urgently request assistance from the international community to help resolve security crises and to determine the characteristics of an international security force.”

Many Haitians have dismissed the idea of ​​further international intervention, noting that UN peacekeepers have been accused of sexual assault and unleashed a cholera epidemic that killed nearly 10,000 people more than a decade ago.

“I don’t think Haiti needs another intervention,” said Mathias Pierre, Haiti’s former elections minister. “We’ve been through so many, and nothing has been resolved… If we don’t do it as Haitians, 10 years from now we’re going to be in the same situation again.”

He called on the US government to help reduce the amount of ammunition and weapons flowing into Haiti and to equip law enforcement officers so they have more guns and are able to carry intelligence on gangs.

He also worried about the situation an international security force would encounter.

“It’s not an army they’re facing,” he said. “You face gangs that are in poor areas and use the population as a shield to protect themselves.”

Haiti’s national police, with limited resources and chronic understaffing with only about 12,800 active officers for a country of more than 11 million, has struggled to control gangs.

The gangs have only grown in power since the assassination of President Jovenel Moïse in July 2021.

When Henry’s government approved the request for foreign troops, his office issued a statement saying the prime minister had not resigned and dismissing the so-called fake reports circulating on social media and targeting hundreds of Haitians at large country to celebrate in the streets late Thursday.

“They are pure and simple strategies of fabrication, poisoning, orchestrated by individuals with evil intentions, aimed at sowing more trouble and confusion,” his office said.

Protesters and increasingly powerful gangs have helped plunge Haiti into unprecedented chaos, with the country paralyzed for almost a month after gangs surrounded a major fuel terminal in the capital Port-au-Prince and refused to budge, until Henry resigned.

As a result, crews were unable to distribute about 10 million gallons of diesel and gasoline and more than 800,000 gallons of kerosene stored on site.

Protesters have also blocked roads since Henry announced in early September that his government could no longer afford to subsidize fuel, prompting a sharp rise in the price of petrol, diesel and kerosene.

The document, signed by Henry and other officials, says such actions have “catastrophic consequences.”

Gas stations are closed, hospitals have restricted essential services and businesses like banks and grocery stores have reduced opening hours.

On Wednesday, the UN Resident and Humanitarian Coordinator Office in Haiti proposed a “humanitarian corridor” to get fuel and aid to those in need. It noted the country is also grappling with a new cholera outbreak, with multiple deaths being reported and dozens of patients being treated.

“The most vulnerable people are the first to suffer from the lockdown,” the UN said.

At least 13 US congressional leaders have demanded that US President Joe Biden’s administration stop showing its support for Henry and suspend all deportations “given the extreme physical security risks and the dire humanitarian situation”.

It called on the US government to “support legitimate efforts to create an interim Haitian government that respects the will of the Haitian people and should make it clear to Henry that if he blocks progress, it will not support him.”

Henry has stressed that he has no interest in staying in power and plans to organize general elections once violence subsides.