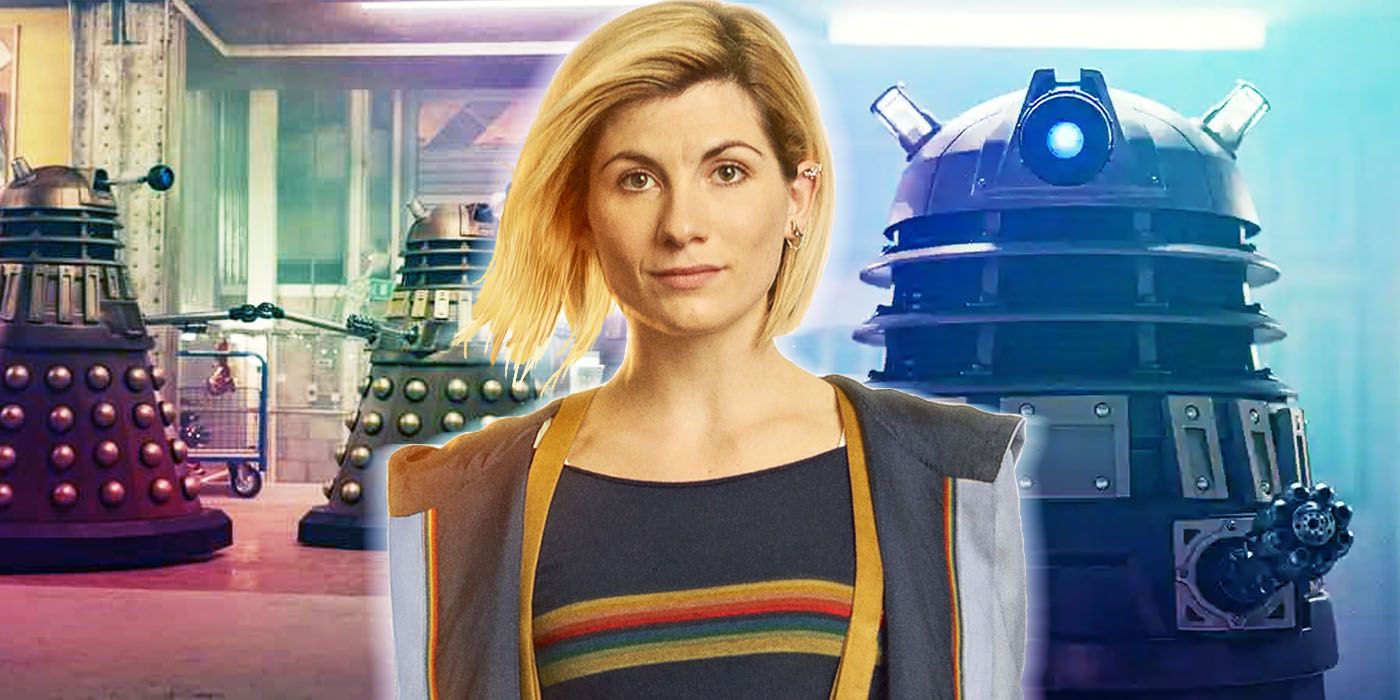 The Daleks return in Eve of the Daleks to provide the Doctor with the answers to their decisions during Doctor Who: Flux.

WARNING: The following article contains spoilers for the latest episode of Doctor Who, “Eve of the Daleks,” which aired on the BBC on Sunday January 2nd.

The new year in Doctor Who opened with fireworks from ELF Storage, while the Doctor (Jodie Whittaker), Yasmin “Yaz” Khan (Mandip Gill) and Dan Lewis (John Bishop) enjoyed the light show. They are accompanied by ELF Storage owner Sarah (Aisling Bea) and her customer Nick (Adjani Salmon) as they watch the business crumble to dust and rubble as fireworks shoot through the sky. Except … that’s not all that happened.

At exactly eight minutes to midnight, all five people were repeatedly killed by the Daleks while they were stuck in a time warp. It makes sense for the Daleks to kill the Doctor and her companions, but what is their interest in killing Sarah and Nick? Aside from being not Daleks themselves, they don’t care as they are in no way the Doctor’s allies. However, the Daleks have a more pressing matter affecting their actions: they were killed weeks earlier in the Flux event, making them feel terribly genocidal.

In Doctor Who: Flux, the Doctor’s adoptive mother, Tecteun (Barbara Flynn), has been exposed as the leader of the Division, a black ops organization that violated Gallifrey’s laws about meddling in the history of other worlds. The doctor once worked for Division, but ran away the moment her mission statement no longer matched her values. After Tecteun had inspired countless worlds in countless timelines to rebel against oppressive figures of authority, Tecteun tried to destroy the universe and the Doctor with him so that Division could start over in a new universe.

Many of the Doctor’s enemies used the Flux event to conquer the worlds they have always wanted to conquer. The Daleks conquered entire chunks of time and space, as did the Cybermen. However, the Sontarans only attempted to advance the claims of their commander Linx on Earth in the 13th century. They almost succeeded, but their invasion of Earth was thwarted by the doctor, who forced them to retreat. Unfortunately for both the Sontarans and the Doctor, British General Logan blew up their ships as they left.

General Logan’s actions angered the surviving Sontarans, who – with the help of the Great Serpent – launched an even more aggressive attack on Earth. in the Doctor Who: Flux Episode “Chapter Six: The Vanquishers” lured the Sontarans, the Daleks and Cybermen, near Earth, where the second Flux event would take place. Their plan was to wipe them all out so the Sontarans could gain the upper hand, which in itself is a very Dalek-like strategy. However, the Doctor hijacked the Sontarans’ own scheme and used it against them, killing all three of their deadliest enemies in one fell swoop. This is the action that comes back to bite the butt of the Doctor in “Eve of the Daleks”.

After discovering the Doctor’s TARDIS in the basement of Sarah’s ELF warehouse, an executioner Dalek squad sends a small handful of Daleks to have the Doctor executed for their actions against them during the second Flux event. However, the doctor refuses to accept responsibility for her role in her mass genocide, pointing out that it was the Sontarans who developed the strategy that led to almost all of them becoming extinct. The Daleks don’t care who actually initiated the plan and put it into action. They only care about the fact that the Doctor was the focus of the Flux event in the first place.

Although the doctor is not responsible for unleashing the river that has destroyed millions of planets, she is still the reason. Even without a division, the Doctor still has a history of intervening in the historical events of various worlds, including Skaro, the home planet of the Daleks. This, of course, earned her many dangerous enemies who then enabled her dangerous actions against her. This includes Tecteun unleashing the Flux event and the Doctor’s enemies all designing the Pandorica to imprison their eleventh incarnation (Matt Smith).

More than anything, anything that leads to the flux and its consequences is a consequence of the doctor’s past actions. The fact that the doctor keeps running away from her problems is one of the reasons why she is running out of time, as time itself warned in the Doctor Who: Flux Final. In “Eve of the Daleks” it was the Daleks who tried to hold them accountable for their actions. In the remaining two episodes, it may be the Sea Devils and maybe the Master and Time itself who next have their answer to their past actions.

READ ON: A Doctor Who Fan Theory Reveals More About TARDIS’s Translation Capability

Diane Darcy is a reporter for CBR with a psychological background. She is also a graphic designer and podcaster. A great lover of anime, manga, comics, film, and television, Diane has created several fan blogs and websites over the years. Her most popular blog is Helena Wayne Huntress’ blog. Diane has also contributed publications for WWAC, Comics Bookcase, and Shelfdust. Diane is also a regular podcaster on DC Comics and Doctor Who for the Wright On Network. Diane can be followed on Twitter at @HelenaWayneBlog and Instagram @dianedarcywriter