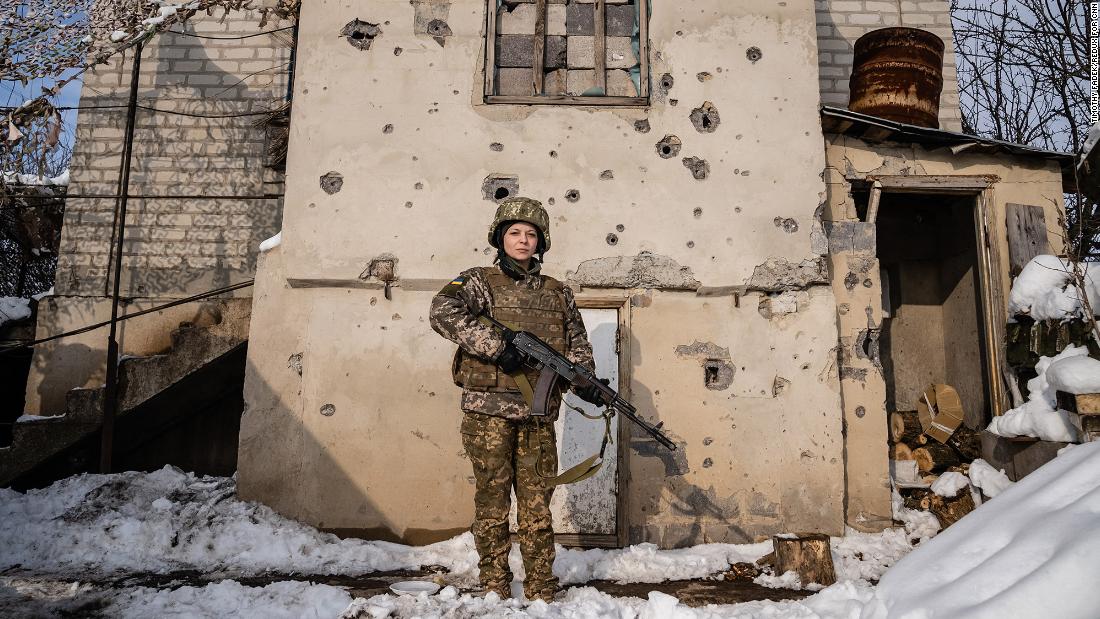 The Russian border is less than 20 miles away. Thousands of Russian troops have gathered behind, bringing tanks and other armor.

But despite growing concerns in Washington over an “imminent” Russian invasion, there is little sense of urgency among Ukrainian troops here.

The soldiers on this front in the south-east of the country have to look in three directions at once: to the north and east they are less than a mile from pro-Russian separatists – and the occasional minefield. To the south, Russian naval vessels patrol the Sea of ​​Azov.

The wintry lanes around the village of Vodiane, whose residents fled the rebel attack in 2014, are now occupied by wild dogs and some troops sheltering from the biting wind. Long-abandoned trenches are filled with snow.

Nearby, a young sergeant commands a handful of men in a defensive position on a wooded ridge. The separatist lines are only a few hundred yards away and gunfire is exchanged daily.

One of the soldiers, Andrei, shows us a guard position dug into a bank of rich, dark earth. He says the separatists frequently send up drones to scan Ukraine’s front lines.

Moments later, an automatic grenade launcher fires a bullet at the Ukrainian trenches, the detonation echoing across the fields. The soldiers hardly notice, but the sergeant calls through the line with an old field phone to make sure there are no casualties. The troops here don’t have radios.

The sergeant, who prefers not to give his name because his family hails from Donbas – a region now partially controlled by the separatists – insists his men will be ready if a Russian offensive occurs, despite everything that appears to be very basic defense.

“We are ready to meet any guest from Russia,” he tells CNN with a faint smile. “Our commanders have told us that we have to be aware, we have to be ready.”

A problem for the Ukrainians is that under a ceasefire agreement with the rebels, neither side can bring heavy weapons such as anti-tank missiles to the front lines. In the event of a lightning-fast Russian offensive, that would put the Ukrainians at a serious disadvantage.

The sergeant is confident that he will not see “Russian guests”. He thinks the risk of an invasion is exaggerated.

But if he’s wrong, this is perfect tank country: a rolling landscape unbroken by rivers or other natural barriers. If the Ukrainians’ thin defenses around these villages gave way, Russian tanks would probably be stationed on the outskirts of the port of Mariupol, a city of half a million people, within hours.

Like the soldiers, the people of Mariupol do not expect an invasion. There is no heightened alert, no exodus of civilians west on the night train to Kiev.

Instead, life goes on as usual: families brave the cold to skate on Teatralnyi Square or stroll along the pier with hot drinks. The city’s massive steelworks belch noxious smoke over Mariupol’s suburbs, and stalls are packed in the central market.

Natalya, who runs a sausage stand, is optimistic that there will be no conflict.

“We have children and grandchildren, and we don’t want war,” she says. “And there will be no war. We believe that.”

Erzhan, a Turkish citizen who has lived here for 20 years and previously served on ocean-going freighters, now sells chickens at the market with his Ukrainian wife.

“No, there will be no war,” he says confidently. “People live well here, everything is normal. Only Biden thinks that. Biden wants NATO to be here, and the Russians don’t want that.”

Many people in Mariupol appear to be accepting the government’s call for calm – even as Western officials warn that a Russian attack on Ukraine is very likely and could begin as early as this month. They can’t understand what all the fuss is about.

At the nearby Sava coffee stand, Nadia serves steaming flat whites. She worries more about the recent outbreak of Covid-19 in Ukraine than the prospect of war. On Saturday, Ukraine recorded its highest daily number of new cases. As for any Russian threat, she shares a Mariupolian fatalism: “This is our home; we have nowhere else to go.”

“We’ve been living with it for eight years,” has been the common refrain here since pro-Russian separatists briefly occupied the city before being pushed back by Ukrainian troops.

Already in 2014 there was strong pro-Russian sentiment in Mariupol. The city saw street fighting. In some villages along the nearby border now occupied by the rebels, Russian is the mother tongue and the capital, Kiev, is seen as a distant and alien place.

But demographics have changed. Mariupol’s population has been swollen by Ukrainians who have fled rebel occupation and now shudder at the prospect of another war. All the more so as living standards here have improved and European investments and government spending aim to win hearts and minds.

These are valuable improvements that the people here want to protect.

You know all too well what war looks and sounds like. At least 30 people were killed in a rocket attack on blocks of flats in January 2015.

Several villages east of the city were destroyed in the fighting; Eight years later they are still abandoned. In the coastal village of Shyrokyne, hardly a house is untouched, the walls scratched and punctured by rocket fire.

Whether in disbelief or denial, the people here – and the soldiers tasked with defending them – cannot imagine a war infinitely more destructive than the fighting that has already claimed 15,000 lives and driven many thousands more from their homes to have.

So they wait and watch and hope.