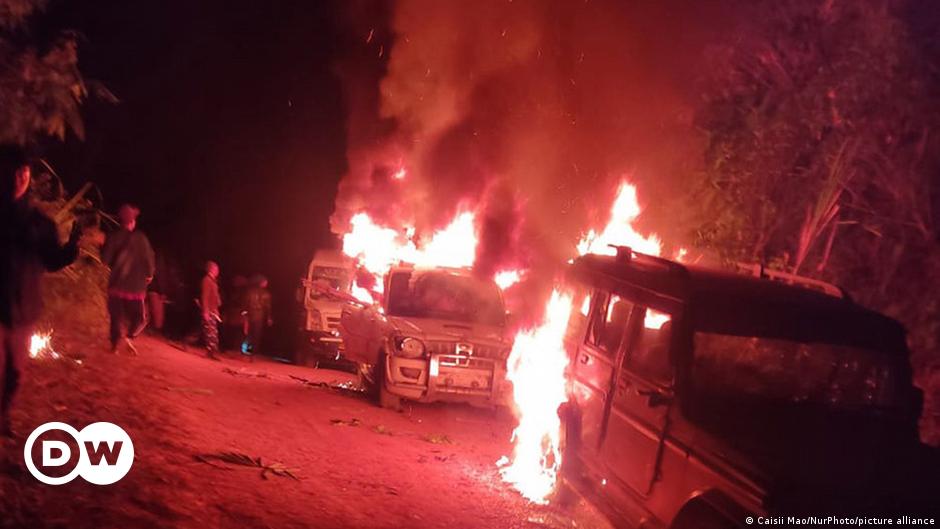 India: Armed Forces Act under fire for promoting a culture of impunity | Asia | An in-depth look at news from across the continent | DW

Tensions persist in the northeastern Indian state of Nagaland after 14 civilians and one soldier were killed in a botched army operation against insurgents.

Over the weekend, an elite military commando shot and killed six miners who were returning to their homes in Mon district because they believed they had targeted armed insurgents. Shortly afterwards, another eight people were killed by troops facing an angry crowd.

The killings sparked violent protests in the troubled region, where dozen of separatist uprisings were led by ethnic rebel groups.

The incident marked one of the deadliest escalations in Nagaland in recent years, which has long been marked by uprisings and ethnic divisions led by local militant groups. The deadly clashes have raised concerns about their impact on the ongoing Naga peace process with the government.

“AFSPA is damaging the image of our country, which is the largest democracy in the world,” said Rio at the memorial service for the dead civilians in Mon.

Naga armed groups, civil society organizations and tribal groups are also calling for the AFSPA to be repealed, and accusing the security forces of having exceeded their powers under the AFSPA in their counterinsurgency operations.

“The protection of the security forces is a major obstacle to the judiciary in the crisis region,” Rosemary Dzuvichu, advisor to the Naga Mothers’ Association, told DW.

What are the Army’s â€œspecial powersâ€?

The AFSPA Act of 1958 extends security forces extrajudicial powers allowing them to search, arrest and even shoot suspects on a “reasonable suspicion” basis without fear of prosecution.

The law remains in force in Mizoram, Nagaland, Manipur, Assam, Jammu, and Kashmir, as well as parts of Arunachal Pradesh.

According to the law, local authorities require federal approval to prosecute army or paramilitary soldiers in civil courts.

Human rights groups have called the law draconian and pushed for its repeal for decades.

“It has to go. The call to repeal AFSPA is not anti-national. This massacre was a reminder of how this draconian law undermines India’s pride as the world’s largest democracy,” said Binalakshmi Nepram, founder of the Manipur Women Gun Survivors Network & Global Alliance of Indigenous People Peoples, says DW.

â€œCan the indigenous peoples of the Northeast consider themselves equal citizens of an equal country? As long as there is AFSPA, where security forces have had special powers since 1958 to shoot and kill civilians continuously … how is that possible? “

Previous calls for the AFSPA to be abolished have been denied at the national security premises.

In 2004, the Indian National Congress-led government under Prime Minister Manmohan Singh set up a five-member committee under former Supreme Court Justice Jeevan Reddy. He claimed the AFSPA had become a symbol of oppression and recommended that it be lifted. This was further confirmed by a second administrative reform commission.

Senior bureaucrats also recommended that the AFSPA should at least be changed, but Defense Department opposition has blocked all possible decisions.

Although a cabinet subcommittee was tasked with investigating the matter, the Bharatiya Janata Party government later dropped the subcommittee and also rejected the results of the Reddy commission in 2014.

“What happened in Nagaland is a shame for our country and should have been a chance for the government to repeal the AFSPA. But I don’t see any repeal of the law anytime soon,” human rights attorney Nandita Haksar told DW.

“The human rights discourse has become a weapon in itself and is used to justify wars and military intervention,” Haksar said. Her book “Nagaland Files: A Question of Human Rights” revealed for the first time the human rights violations committed by the Indian security forces.

In 2000, ten civilians were killed in the â€œMalom massacreâ€ in Imphal, the capital of Manipur.

The killings prompted 28-year-old Irom Sharmila on a 16-year hunger strike against the AFSPA. Amnesty International declared her a prisoner of conscience, which subsequently led to the lifting of the AFSPA, but only in the municipality of Imphal.

“An atmosphere of impunity”

Activists in the northeast region said there were 1,528 cases of “extrajudicial killings” by the army and other security forces in Manipur between 1979 and 2012.

The lawsuit was brought to the Supreme Court in 2012 by the Extrajudicial Execution Victim Families Association of Manipur (EEVFAM).

During that time, the Supreme Court set up a three-person committee to investigate six cases of alleged fake encounters, including the 2009 murder of 12-year-old Azad Khan. The court produced a report that found that all six murders ” fake encounters. ” There were no charges against security forces.

“Manipur has in the past killed innocent people in the name of counterinsurgency. The law created an atmosphere of impunity in which so many innocent people died,” EEVFAM secretary Edina Yaikhom told DW.