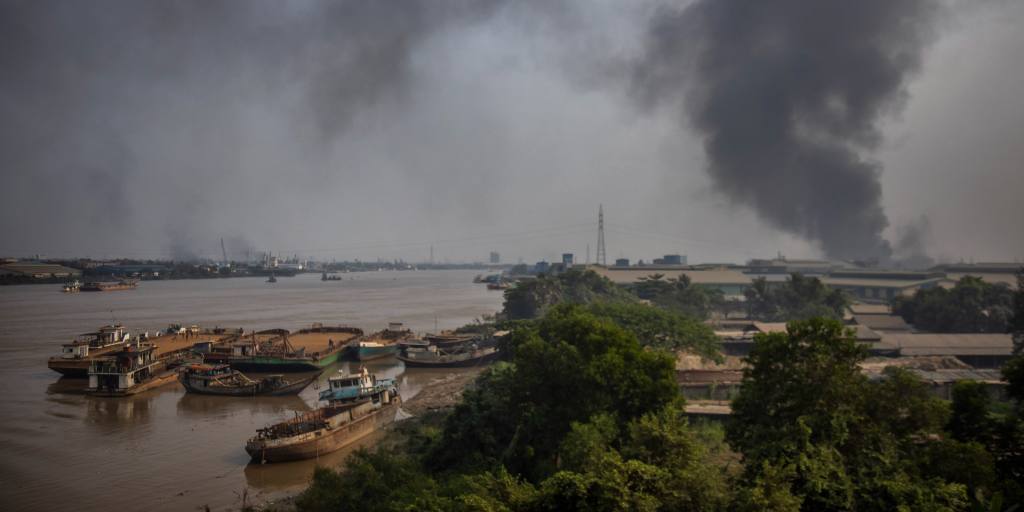 
Subir Bhaumik is a former BBC and Reuters correspondent and author of five books on South Asian conflicts.

Popular resentment over China’s involvement in Myanmar and the attacks on Chinese companies there has increased since the February 1 coup that overthrew the elected government of the National League for Democracy. India, another friendly neighbor of Myanmar, has not drawn the anger of protesters as much as China has. But New Delhi’s political paralysis against Myanmar was reflected in his abstention on June 19 in a UN General Assembly vote condemning the military takeover.

India’s statement that the “hastily tabled resolution is not conducive to our efforts to strengthen the democratic process” sounded lame in Myanmar. It is high time New Delhi took a more active role in restoring democracy.

Attacks on Chinese companies and the sites of demonstrators in Myanmar, who burn the flag of the ten-member Association of Southeast Asian Nations, served as a warning to India. Anti-China and anti-ASEAN resentments soared after their representatives met with military regime leaders in Yangon in early June while ignoring resentments from the National Unity Government’s anti-military regime.

Countless indigenous resistance groups have sprung up in Myanmar, including the self-proclaimed Federal Army and the People’s Defense Forces. Many depict hardline activists seeking revenge for the indiscriminate murder of peaceful protesters by the military, also known as tatmadaw.

India may not want to push this far for further sanctions, but it could play a stronger mediator role and use its access to Myanmar’s numerous stakeholders to foster dialogue to restore democracy. India’s military has close ties to the Tatmadaw, while its political parties have ties to the regime’s anti-military forces, including the ousted NLD, its affiliated NUG and some ethnic armed organizations.

The NLD government under Aung San Suu Kyi had drawn closer to China after the West strongly condemned the military attacks on the Rohingya minority. However, Beijing was unhappy with the NLD’s refusal to resume the China-funded Myitsone Dam project and its plans to reduce investment in the China-backed Kyaukphyu Port Special Economic Zone project.

China’s support for the military regime increased after the generals approved 15 major investment proposals, most of them Chinese. As a result, protesters are attacking Chinese companies, with 37 Chinese factories burned down to date. There is an undeclared boycott of Chinese goods by neighborhood committees, a bastion of anti-military regime forces. The threats to blow up the Kyaukphyu-Yunnan oil and gas pipeline have also unsettled the Chinese.

Unless military repression stops, urban armed riots, such as the last one in Mandalay, will intensify and further attacks on key China-funded infrastructures are likely. This would seriously jeopardize the China-Myanmar economic corridor, one of China’s two key projects in the Belt and Road Initiative.

China faces a similar predicament in other countries. Attacks by Baloch separatists on projects related to the China-Pakistan economic corridor have already forced Beijing to push for stronger security measures with Pakistan. The view that China is an emerging neo-colonial power, hungry for resources and with no regard for local issues, has gained ground around the world.

For India, which wants to offer a cheap alternative to China in Southeast Asia, the lessons are clear. Their policy towards Myanmar, based on fears that the military regime will be driven into the arms of Beijing, is flawed. While some argue that the military regime has already moved closer to China, others believe the mounting attacks on Chinese interests may soon force Beijing to reconsider its full support for the military regime. India should seize this opportunity in Myanmar, where a boycott of Chinese goods opens up an opportunity for Indian businesses.

If India wants to assert itself as a regional power, it has to play a mediating role, perhaps together with Japan. Tokyo and New Delhi have already been quietly working on an alternative to China’s BRI projects, but India has a potential mediator in Zoramthanga, a former rebel leader and prime minister of Mizoram state who is popular with Myanmar’s pro-democracy movement for his openness hat door for refugees. He has extensive contacts with the many ethnic rebel armies of Myanmar and also with the military. And he is ready to take on the peacemaking role.

The Tatmadaw needs the Indian army to contain the Arakan Army, a Rakhine military organization, just as India needs Myanmar to prevent the northeast Indian rebel groups from using jungle bases in Sagaing. But the Arakan Army’s current truce with the Tatmadaw and the reported use of northeast Indian rebels by the Myanmar military against refugees and local resistance forces is a reason for New Delhi to look beyond a limited role in counterinsurgency.

Many in Myanmar believe that Indian democracy and federalism are the best models for a future Myanmar. The Bodh Gaya Temple in the Indian state of Bihar, where Buddha is said to have achieved enlightenment, is a sacred pilgrimage destination for Burmese Buddhists. The former Myanmar General Maung Aye once said to me: “For weapons we go to China, to save our souls we go to India.”

It is time for Indian diplomacy to break out of its self-imposed limbo and use the tremendous goodwill of the country in Myanmar to play a strong and proactive role in attempts to end the conflict there.

Global pressure makes Tatmadaw commanders realize that it is impossible to continue their brutal repression. The military is facing a rebellion from within its own ranks. According to a report, 800 soldiers and officers have already joined the pro-democracy movement. Cracks in the upper tiers cannot be ruled out.

The challenge for India is to involve all stakeholders in Myanmar and work on a solution. Such measures may not produce immediate results, but India’s peace diplomacy could certainly make a significant political contribution to New Delhi, commensurate with an emerging regional power.