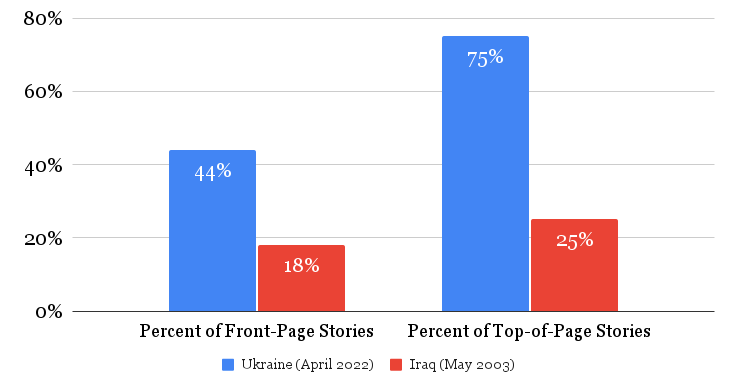 That New York Times The April 5, 2022 front page featured four stories about the Ukraine War, including three at the top of the page.

That New York TimesThe slogan “All the News That’s Fit to Print” has appeared on the front page of the newspaper since 1897 Times Coverage of the 2022 Ukraine war and the 2003 invasion of Iraq show that the same news doesn’t always make the front page.

FAIR examined the front pages of the New York Times between April 1 and April 30, 2022 and compared them to those from May 1 to May 31, 2003. The dates represent the second full calendar months of the Russian invasion of Ukraine and the US invasion of Iraq, respectively – major armed conflicts major world powers illegal conquer smaller countries.

In May 2003, when there were 226 front-page articles, only 41 of them (18%) covered the Iraq invasion. Thirty-two of these were at the top of the page, nine below; 25% of all top-of-the-page stories were dedicated to the Iraq war.

This means that a major conflict instigated by the country in which the newspaper was published received less than half as many front-page articles – and a third at the top of the front page, where the highest-priority articles are placed – compared to a war in which this country was not directly involved. For six days a month, the newspaper didn’t have a single Iraq story at the top of the page, and the top-of-the-page stories were never exclusively about Iraq.

The seemingly greater newsworthiness of military aggression when committed by an official enemy is not only evident in the Times front page. A study of ABC, CBS and ABC nightly newscasts (Tyndall Report, 7.4.22) found that the first full month of the Ukraine war received more coverage (03/22, 562 minutes) than the peak month of coverage of the Iraq war (04/03, 455 minutes).

Civilian deaths, newsworthy or not

In May 2003, the Iraq war was just one of many stories about it New York Times (5/10/03) – and has sometimes been pushed off the front page altogether.

From the 79 title page New York Times Stories about the May 2022 war in Ukraine, 14 of them were mostly about civilian deaths as a result of the Russian invasion, all of which appeared at the top of the page. As FAIR has argued in the past (e.g. on March 18, 2022), reporting on the civilian toll of war is entirely warranted as civilians are typically exposed to the worst effects of modern warfare. By early May, the Office of the United Nations High Commissioner for Human Rights (2.5.22) estimates that there have been at least 3,153 civilian deaths in Ukraine.

In contrast, in the month of Iraq coverage, there was only one story (1.5.03) of civilian deaths at the hands of the US military on the front page, a report describing an event in which US soldiers killed two protesters (described as part of a “pack of angry Iraqis [who] singing and throwing stones”). However, the lack of cover did not reflect the lack of civilian casualties during this period: body count in Iraq estimates that by the end of May 2003 there had been at least 7,984 civilian deaths.

Other stories about Iraqi non-combatants killed in the war sometimes made it into the newspaper (eg. 05/11/03), but not on the front page. That Times has a history of downplaying civilian casualties at the hands of the U.S. military (FAIR.org, 09/18/15). The contrast between intense interest in civilians killed by Russia and minimal attention to civilians killed by the United States is consistent with a previous FAIR study (3/18/22). It found 27 mentions in the network’s nightly newscasts in the first week of the Ukraine invasion identifying Russia as responsible for harming civilians, compared to nine mentions in the first week of the Iraq invasion about harming civilians Civilians by the US reported – fewer than the 12 mentions representing the US portion Iraqi civilians.

It should be noted that in 2007 the new York Times (07/18/06) announced to reduce physical page size due to budget cuts. While Bill Keller, the editor-in-chief at the time, estimated that the change would only result in a 5% reduction in news because pages were added, the front page suffered greater losses due to the smaller format; There were 20% fewer stories overall when comparing May 2003 to April 2022. But the Ukraine war still managed to get more front-page coverage than the Iraq war in absolute terms, and also accounted for a larger percentage of front-page stories.

FAIR’s work is supported by our generous donors, who allow us to remain independent. Donate to be part of this important mission today.