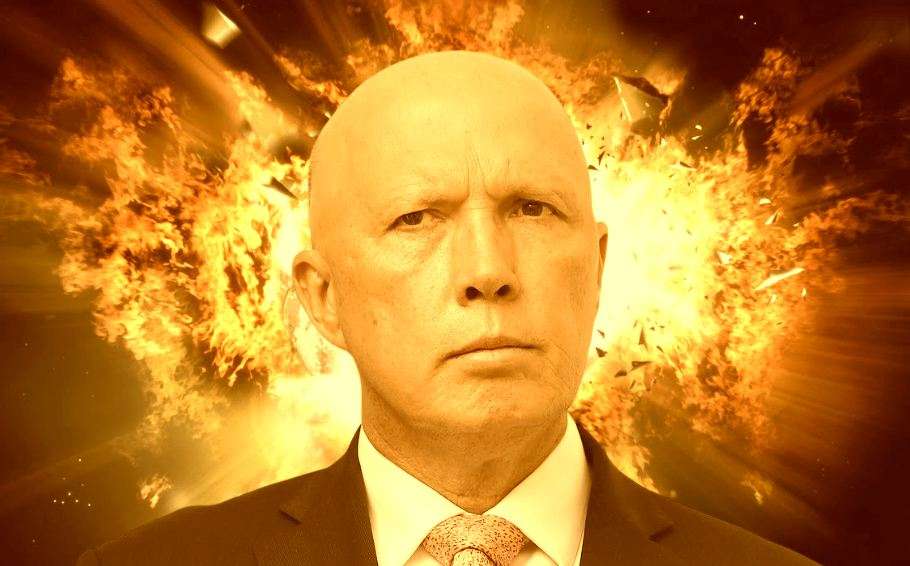 The federal opposition led by Peter Dutton is poised to launch a full-scale anti-LGBTIQA+ culture war against school inclusion.

I predicted that before the election. Because contemporary anti-LGBTIQA+ far-right culture wars run in cycles. They begin to attack anti-discrimination protections in the name of a bogus threat to “religious freedom”. They then move on to attacks on transgender rights based on false claims about “women’s safety”. Or attacks on inclusive schools under the misleading banner of “parents’ rights”.

Under Scott Morrison we saw the first two. But we haven’t seen the third since the false fuss about safe schools at the end of the marriage debate.

However, with US Republicans making “Don’t Say Gay” legislation one of their main platforms, it was inevitable that Australia’s inclusive schools would be next in the LNP’s line of fire.

Peter Dutton practically confirmed this when he said he would crack down on “teacher extremism”.

“I think the national curriculum, the value argument, will be one of the big debates of this Parliament. I think you will see a big difference between the policies we are pursuing in the next election and Labour’s.”

As this quote suggests, the attack will be on the national curriculum. Just like the Religious Discrimination Act, the anti-LGBTIQA+ culture warriors will use it as a wedge against Labour. It will likely include censorship of certain educational materials, relentless attacks on “awakened” teachers and student diversity groups in the tabloids, and also a focus on endorsing materials for trans and gender-biased children.

Peter Dutton credited himself with inventing the controversial 2017 marriage poll. He then urged CEOs to stick to their guns in support of marriage equality. Then, at the 2017 NFL Grand Final, he wanted an anti-equality song alongside Macklemore’s Same Love. And who can forget that he also banned IDAHOBIT morning teas in the military.

The question is not whether he will launch an attack on inclusive schools. This culture war against LGBTIQA+ is inevitable. So the question is, how do we prepare for this attack?

As a veteran of the campaign to defend safe schools and struggles over LGBTIQA+ curriculum, here’s my best advice that dates back to the 1980s.

Find out what LGBTIQA+ inclusive education policies already exist in your state or territory and what research shows they work.

When the attacks begin, you can use these guidelines as evidence that work is already underway to promote inclusive schools and the sky hasn’t fallen yet. Research on the effectiveness of existing programs reinforces this point.

Find out about the latest statistics on the challenges LGBTIQA+ youth face in schools. For example, over 60% have felt unsafe at school in the past 12 months and over 90% say they have heard homophobic abuse. 61% reported verbal violence and 18% physical violence. Because of this lack of security, one in six young LGBTIQA+ people has attempted suicide and a third have harmed themselves. Statistics like these will help illustrate the risk of further marginalization of LGBTIQA+ youth.

Research from La Trobe University: Writing yourself in 4th

Also follow the polls on parental attitudes towards LGBTIQA+ inclusion in school. According to a landmark study by the University of Western Sydney published earlier this year, 82% of Australian parents support gender and sexuality diversity in school curricula.

Working with state and federal education ministries and departments

Warn them of Peter Dutton’s impending attack. Provide them with the above evidence. Remind them that the best way to deal with attacks on inclusive schools is to stand firm and not run for cover hoping it’s all over. It will not.

If you are a single LGBTIQA+ Australian, write to your state or territory Minister of Education and the Federal Minister urging them not to give in to the scaremongering.

This was one of the most effective strategies I was involved in during the Safe Schools riot. We were able to bring together a wide range of education stakeholders to support clear statements in defense of inclusive schools.

Once signed up by groups closely associated with education, publish their agreed statement in the local newspaper and arrange for the groups to send a delegation to meet with your local federal representative.

This can be done at both local and state level.

Work with other stakeholders

The campaign against the Religious Discrimination Act was successful because the LGBTIQA+ community was able to work with other groups who were also disadvantaged by the law, including people with disabilities, religious minorities, employers, unions and women’s health groups.

Other groups are likely to be negatively impacted by the coalition’s moral panic over schools, as that panic will also be about “critical race theory”, “climate alarmism” and “making students hate Australia”. Others we can work with are environmental educators and groups working to promote racial, ethnic and religious inclusion.

We must ally with them now so that we are ready to support one another when the storm comes.

Work with the Greens, Independents and Labour

The Greens, Teal Independents and Senate faction, emboldened by their strong voice, can play a key role in repelling an attack on inclusive schools.

You can ask questions, discuss case studies and research, and introduce inclusive legislation.

Above all, they can get the Labor government to speak out as strongly as possible.

So far, Federal Labor’s response to the LNP’s LGBTIQA+ culture wars has been to make itself a minor target.

That comes at a huge price for LGBTIQA+ people, who have been left largely unprotected by Labor during the religious discrimination debate.

We cannot afford to repeat Labour’s small target approach. We must do everything we can, both directly and through the smaller parties and independents, to ensure she takes a strong stance.

The best way for Labor to overcome LGBTIQA+ wedges against this is to show no doubt, fear or hesitation. It’s time for fight, not flight.

These are still our greatest asset. Prepare current and former students, school leaders and parents to speak publicly about the value of existing inclusion programs and the need to expand them rather than imposing further restrictions.

Telling your personal story effectively is not always easy. It may require training and practice. I have been helping LGBTIQA+ people with their personal stories for many years. If you need help, message me here.

Personal conversations and letters to the editor can help to change your mind. Here are some points to consider when addressing LGBTIQA+ inclusion in schools:

School inclusion programs are already happening without the sky falling.

Inclusive schools are better, not just for LGBTIQA+ youth, but for entire school communities.

All students should feel that they are respected for being themselves.

Students face greater ostracism and discrimination when recognition of their identity is censored and deliberately forbidden.

61% of LGBTIQA+ students reported verbal violence and 18% physical violence. Because of this lack of security, one in six young LGBTI people will attempt suicide and one in three will attempt self-harm.

No parent wants their child to attend a school where marginalization and exclusion are acceptable.

We can repel this imminent attack on our dignity and rights, just as we have repelled such attacks in the past.

If Peter Dutton insists on not learning the lesson of 2022, we can hand him 151 Warringahs in the next election.

We can do this by informing ourselves, working with governments, rallying support from groups in the education sector, and connecting with other affected communities.

The earlier and better we prepare, the less damage the attack will do and the faster it will be over.

For the latest news on lesbian, gay, bisexual, transgender, intersex and queer (LGBTIQ) people in Australia, visit qnews.com.au. Check out our latest magazines or find us on Facebook, TwitterInstagram and Youtube.