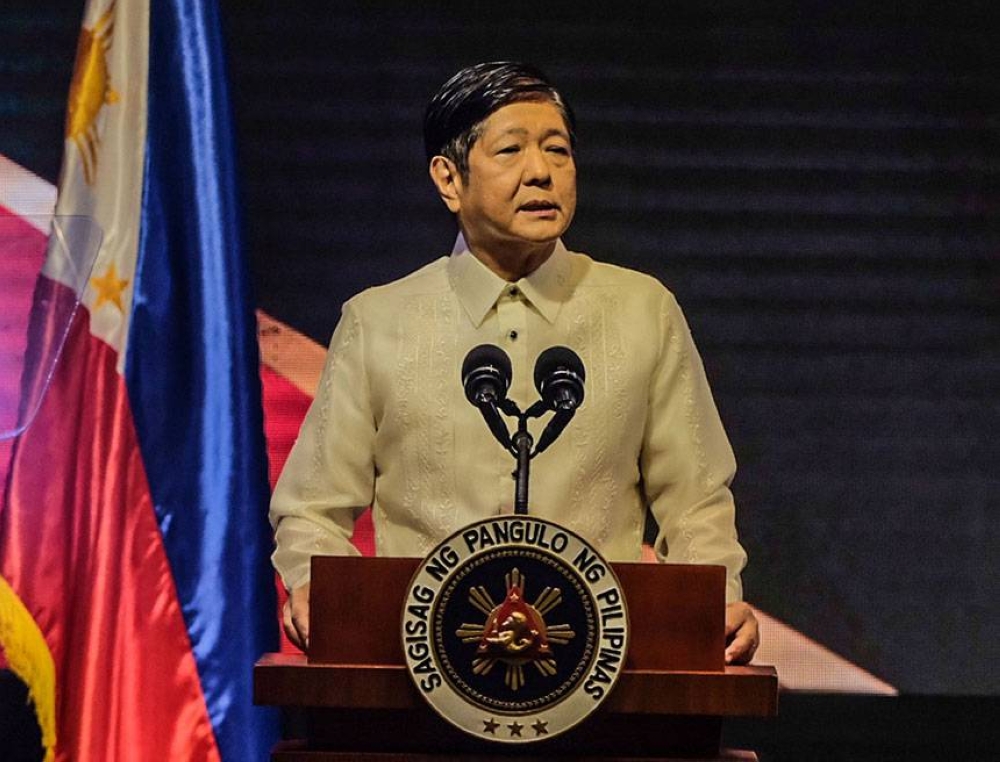 President Ferdinand R. Marcos Jr. attends the opening of the Department of Environment and Natural Resources’ Multi-Stakeholder Forum at a Manila hotel on Wednesday, October 5, 2022. PHOTO BY JOHN RYAN BALDEMOR

AFTER the national consecration to the Hearts of Jesus and Mary, as called for in Part One on October 2, neutrality should be next among the eight points of action against the four Cs of calamity, contagion, conflict and rising costs, particularly in the superpower confrontation between America and China via Taiwan.

The recent meeting at the United States Indo-Pacific Command headquarters in Honolulu between Department of National Defense (DND) officer in charge, retired general and senior Undersecretary of State Jose Faustino Jr., and US Secretary of Defense Lloyd Austin demonstrates the need for a clear and firm statement of policy guidelines to keep the Philippines neutral and not drawn into a conflict over Taiwan.

Stay out of a Taiwan war

Get the latest news

delivered to your inbox

In its “War with China” report, US security think tank RAND Corp. said that air bases used by American forces would be priority targets for the Chinese People’s Liberation Army (PLA). The treacherous Enhanced Defense Cooperation Agreement (EDCA) allows the US to use bases near or in Cebu, Cagayan de Oro, Puerto Princesa, Pampanga and Nueva Ecija. And in Taiwan war games, the Center for New American Security (CNAS) expects US warplanes to attack China from the Philippines, leading to retaliation against us.

Being America’s military platform would therefore devastate our nation far more than the other Cs that threaten us, with deaths, injuries, food and fuel shortages, and the devastation and displacement of vast regions hitting us all at once.

But we could move there. In his article “US, Philippines move closer to defending Taiwan,” geopolitics professor Richard Heydarian reports, “While the Marcos Jr. government has so far attempted to project ‘neutrality’ on the Taiwan issue, and reiterates a peaceful settlement of Taiwan The crisis has shown Manila a new openness to allowing Americans access to its vital northern bases in the event of a Taiwan or other emergency.

To stay out of what may be the most devastating conflict in Asia since World War II, one hopes Prof. Heydarian is wrong. Despite US pressure, we must uphold President Marcos’ policy of “friend to all, enemy to none” of neutrality.

That means halting the full deployment of EDCA and stating a clear policy of refusing to allow US forces to attack China from our country in a war over Taiwan.

What if the US says they can’t defend us if we don’t let their forces use our bases? Two replies. It would let in American forces, which would pose the greatest risk of attack.

As for an unprovoked invasion despite Philippine neutrality, many countries would fight for us, notably Japan, South Korea, Australia and our Southeast Asian neighbors, because of the immense security nightmare the region faces when hostile forces take control of the most strategically located country take over in East Asia.

President Marcos must not allow pro-US circles to undermine the neutrality he and his predecessor rightly espoused, and return to the Aquino-era politics that spawned the dangerous EDCA and America uses our nation for its military operations let.

Let’s heed his father’s warning in 1975: “Do not this (receiving US forces) expose the Philippines to … animosity and conflicts in which we are not involved, and do not make these bases a threat to the security of Filipinos and… the Philippines not only from a conventional armed attack but also from a possible nuclear attack?” (https://tinyurl.com/bdhd3m65).

Besides the US-China conflicts, the biggest deadly threat has to be the 2019 coronavirus disease (Covid-19), which is still claiming dozens of deaths. The Department of Health fears a possible 4,000 daily cases by the end of October, while the OCTA research group wonders if a new subvariant is causing Metro Manila’s rise in Covid-19.

The association of private hospitals recently called for the reintroduction of mask mandates, which were conditionally lifted. This and the use of proven Covid medications, as rightly urged by former entrepreneurship and pandemic advisor Jose Concepcion 3rd, should be adopted as the country stops spending billions and billions of pesos on booster shots for many tens of millions of Filipinos can.

Masks reduce the risk of infection by over 80 percent and at the same time prevent other respiratory diseases. And Pfizer’s antiviral drug Paxlovid cuts Covid hospitalizations and deaths by nearly 90 percent.

Plus, the Food and Drug Administration (FDA) must finally approve clinical trials for ivermectin. Quite a few doctors are prescribing it against Covid, prompting the Department of Science and Technology to schedule testing – if the FDA allows DoST.

Conclusion: Masks and medication save lives. Let’s use them, not just expensive vaccines (https://bit.ly/3EivVXp).

For most Filipinos, however, the biggest fear is not war, or even Covid, but the cost, with no end in sight to soaring food and fuel prices, despite recent cuts in oil products on global recession fears, fueled by US interest rate hikes. Decrease in crude oil prices on international markets.

What to do? President Marcos has the right ideas when it comes to boosting agriculture, turning to Russia, among others, for cheaper oil, gas and fertilizers. He should continue these steps, especially Russia purchases, even if Western allies object. After all, the Philippines has rightly maintained its neutrality in the Ukraine conflict.

On the subject of fertilizers, we reiterate the proposal for Vice President and Secretary of Education Sara Duterte to get 27 million school children nationwide to compost household waste to produce over a million tons of organic fertilizer in a year. While not as effective as the 2.7 million tons of fertilizer we import annually, the free compost would help lower farm costs and lower food prices.

These are emergency measures: consecrate the country, maintain neutrality, mobilize masks and medicines for diseases, boost food and fertilizer production, and import cheaper Russian fuel and fertilizer. In the final part of October 9th, we look at long-term strategies to defeat the four Cs that threaten our nation.

(The first part was released on October 2; the last runs on October 9.)