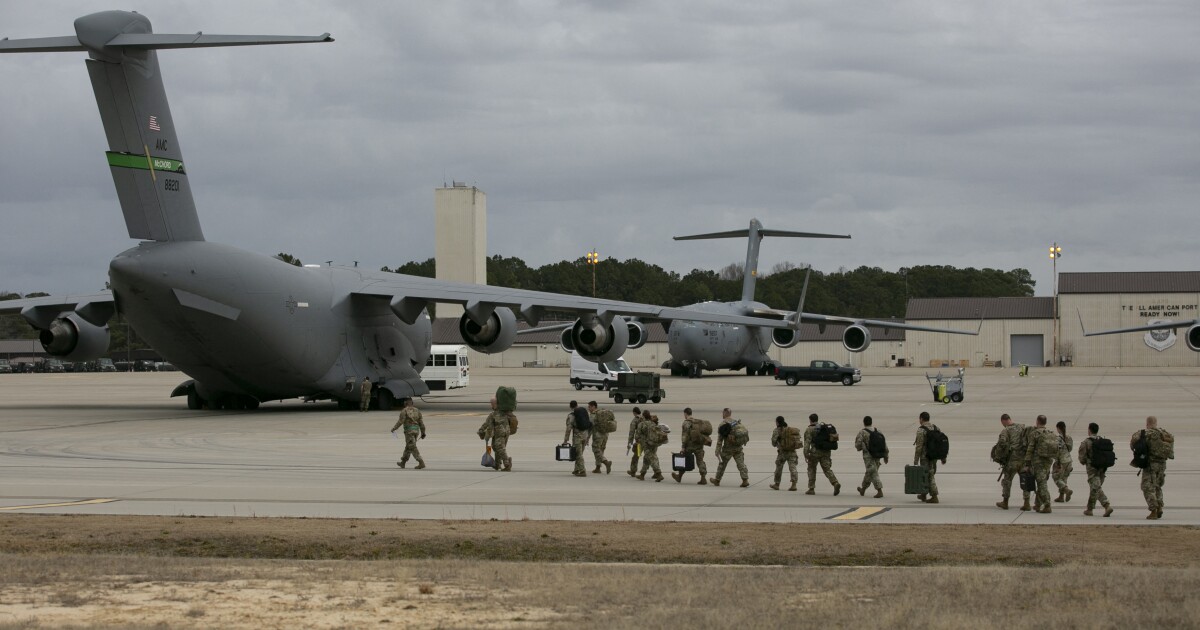 The first of 2,000 US troops newly deployed to Europe have arrived in Germany and Poland, military officials said, as part of a US effort to shore up NATO’s eastern flank while Russia gathers even more forces along Ukraine’s borders.

The troops arriving in Germany are 300 members of the 18th Airborne Corps who will contribute there in support of the joint task force’s headquarters operations. Both entities are based in Fort Bragg, North Carolina.

US Army officers arrived early Saturday at Rzeszow-Jasionka Airport in southeastern Poland, about 50 miles from the Ukrainian border.

About 1,700 members of an infantry brigade combat team from the 82nd Airborne Division, a unit of paratroopers, are expected to arrive in Poland over the weekend.

President Biden ordered the deployments on Wednesday. Another 1,000 soldiers stationed in Germany will be moved east to Romania, which also borders western Ukraine.

Around 70,000 US troops are permanently stationed in Europe. Another 7,000 troops will be deployed to the continent on a rotating basis as part of a NATO support mission called Atlantic Resolve. The equipment arrived at a port in Poland on Friday as part of those rotations, including dozens of Stryker armored vehicles. Back home in the US, 8,500 additional troops remain on high alert to prepare for deployment.

Biden and other US officials have said no US soldiers will take part in fighting in Ukraine.

The US deployment comes as new satellite imagery shows the extent of Russia’s military buildup along Ukraine’s borders. It is estimated that more than 100,000 Russian troops are stationed in locations in Belarus, western Russia and the Crimean Peninsula, the contested territory captured from Ukraine by Russia in 2014.

The key development seen in the new images is that many of Russia’s operational sites now include tents, the presence of which indicates soldiers have arrived or are about to arrive, increasing their combat readiness.

Sources monitoring Ukraine told NPR that the number of Russian tactical battalion groups on the country’s borders has increased to 83 from 60 two weeks ago. Another 14 are on their way.

For months, Ukrainian officials have publicly downplayed the threat of an imminent invasion — even as recently as Wednesday. “At this point in time, Ukraine and its partners consider that this number and composition of forces is insufficient for a full-scale invasion,” Ukrainian Foreign Minister Dmytro Kuleba said at a briefing.

But US officials have taken a slightly different line in recent days. About a week ago Defense Secretary Lloyd Austin told reporters that Russia’s forces would be sufficient to invade all of Ukraine.

“[Russian President Vladimir Putin] there are clearly many options, many more possibilities. For what purpose exactly? We don’t know right now,” Pentagon spokesman John Kirby said in a news conference this week. “And because we don’t know exactly what his goal is, we want to make sure we’re on the NATO front line ready to defend our allies.”

A full-scale invasion would likely have to happen before the end of March, experts say. The frozen ground in winter makes the terrain more passable for overland movement of large forces. By spring these tracks will be muddy, swampy and more difficult to maneuver.

The timeline has pressured world leaders to find a diplomatic end to the crisis, and another schedule of high-level meetings is due in the coming week.

French President Emmanuel Macron is scheduled to meet with Putin on Monday before traveling to Kiev to meet with Ukrainian President Volodymyr Zelenskyy. Chancellor Olaf Scholz is making the same rounds later in the week after a visit to the White House to meet with President Biden.