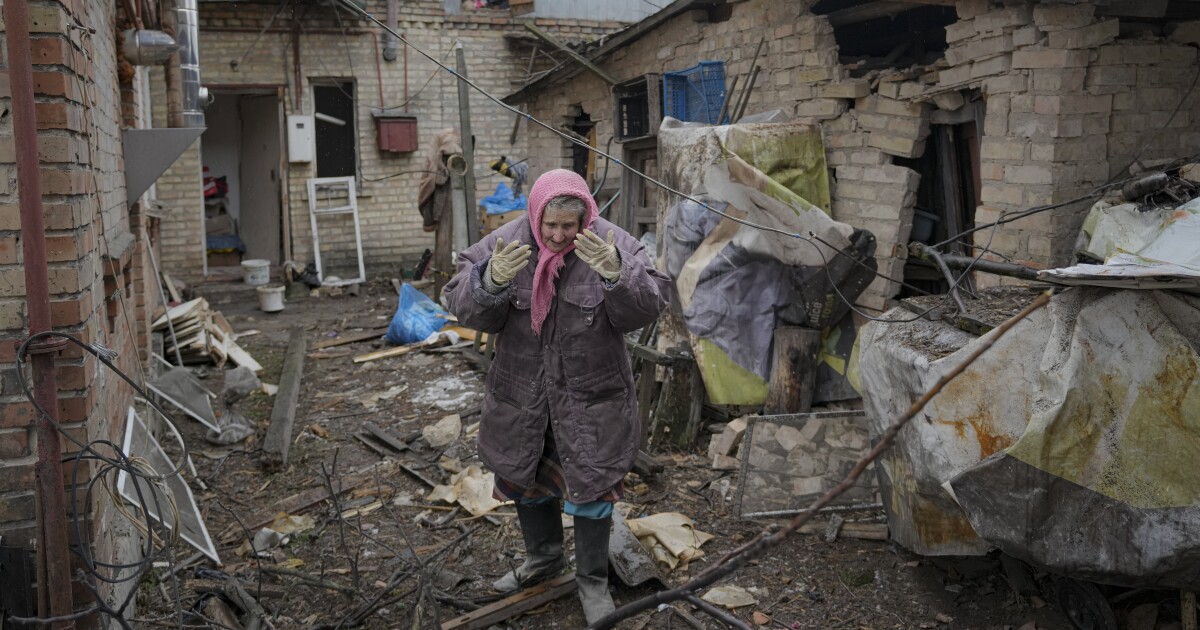 Nicholas Goldberg: Biden says he will keep us out of this war. But history shows that this will not be easy

War has a life of its own. It spirals out of control, confusing the plans, hopes and expectations of those involved.

Military strategists have spent lives taming them. But the study of war is still, to a large extent, the study of uncertainty, misunderstanding, missed opportunities, and unforeseen consequences. History books offer countless tales of random wars and ever-escalating conflicts, with leaders wondering in hindsight how things got so out of hand.

Nicholas Goldberg was the editorial page editor for 11 years and is a former editor of the Op-Ed page and the Sunday Opinion column.

It is well and good that President Biden and his European allies have repeatedly assured us that they have absolutely no intention of engaging in direct military confrontation with nuclear-armed Russia.

But honestly, it’s not that hard to see that promise being swept aside in the face of unexpected pressures and changing circumstances. It is not difficult to imagine that the war in Ukraine is going in increasingly dangerous directions.

Wars that have escalated in unexpected ways include the American Revolution, War of 1812, Civil War, both World Wars, Korea and Vietnam, after an edge learn.

During World War I, for example, Germany’s plan to invade France also required an invasion of Belgium, prompting treaty-bound Britain’s entry into the conflict in August 1914.

In World War II, a small group of German bombers accidentally attacked London in August 1940. In retaliation, the Royal Air Force launched its first air raid on Berlin, which in turn contributed to the German decision to begin the Blitz, the concerted bombing campaign of 1940-41.

This is how escalation works.

Sometimes, according to military strategists, it is intentional. One side deliberately escalates the conflict because it thinks the price it will pay is reasonable.

Sometimes it’s unintentional, as some say was the case with the invasion of Belgium, which came at a time when the Germans were anxious to keep Britain out of the war.

And in some cases it is pure coincidence. A misguided plane accidentally flies into enemy airspace and is shot down, sparking a new phase of the conflict. Or incorrect information could result in a bomb falling on the wrong target – say, a civilian neighborhood – and triggering a strong response.

In Ukraine, barring a negotiated settlement, it is Russian President Vladimir Putin who is most likely to take things to the next level. He could do this by invading a nearby non-NATO country like Moldova. Or he could start using chemical, biological, or God forbid even more dangerous weapons.

Putin’s unpredictability, his perceived resentment of the West’s treatment of Russia, and his belief that brute military force can work to his advantage all make an escalation on his part more likely.

It is even more likely when he feels cornered or losing the war or when his power is under threat. Avril Haines, the US director of national intelligence, told Congress Tuesday that Putin “could escalate and essentially double in size” in response to backlash.

As for Biden and his European allies, they have made it clear time and time again that they absolutely do not want a direct military confrontation with the Russians and that they do not intend to get involved. But can they really assure us of that? will not be?

So far, the Biden administration and its allies have firmly opposed the creation of a no-fly zone over Ukraine. They realize that this would be tantamount to war and would force them to shoot down Russian planes that violate it. “What we are trying to do is end this war in Ukraine, not start a bigger one,” said Secretary of State Antony J. Blinken this week.

But the pressure to enforce them is increasing every day. Several members of Congress have supported the idea. Ukrainian President Volodymyr Zelenskyy, a hero to many in the West these days, is asking for one. Two dozen foreign policy experts signed an open letter published Tuesday by Politico endorsing a “limited” no-fly zone to protect civilians and enforce humanitarian corridors.

Could it become politically impossible to resist? Of course it could, especially if the Russians continue their brutal and heartbreaking attacks on Ukrainian civilians.

And even if we don’t go down that route, the pressure is growing for a different kind of escalation. Sen. Rick Scott (R-Fla.) says introducing ground forces shouldn’t be taken off the table. Senator Lindsey Graham (RS.C.) called for Putin’s assassination.

Others want the West to provide Ukrainians with even deadlier fighter jets or impose even more crippling sanctions on Russia. Putin could see both as a provocation. A Pentagon spokesman said The transfer of jets from Poland to Ukraine could be “misinterpreted as an escalation” and lead to a “significant Russian response”.

Obviously, this is a terribly dangerous cycle. You start with a strictly limited role, but slowly you can pull yourself into it. Remember when we only had “military advisers” in Vietnam?

And then things can quickly go wrong. When one side escalates, the other side’s response is sometimes appropriate. However, in other cases it is asymmetrical. That’s not a good result.

There is currently no direct military conflict between Russia and the West. As long as this is the case, a nuclear duel remains extremely unlikely, according to foreign policy experts. But it’s no longer unthinkable.

All of this proves what reasonable people already knew: war is a terribly bad idea, especially among nations with devastating weapons of mass destruction.

We have no choice but to keep up the pressure of sanctions, but also be on the lookout for diplomatic openings, policy diversions and strategies to pull Putin back from the ledge he climbed onto.

The alternative is a race up the escalation ladder that could bring the world’s two most heavily armed nuclear powers into a direct, uncontrollable confrontation.