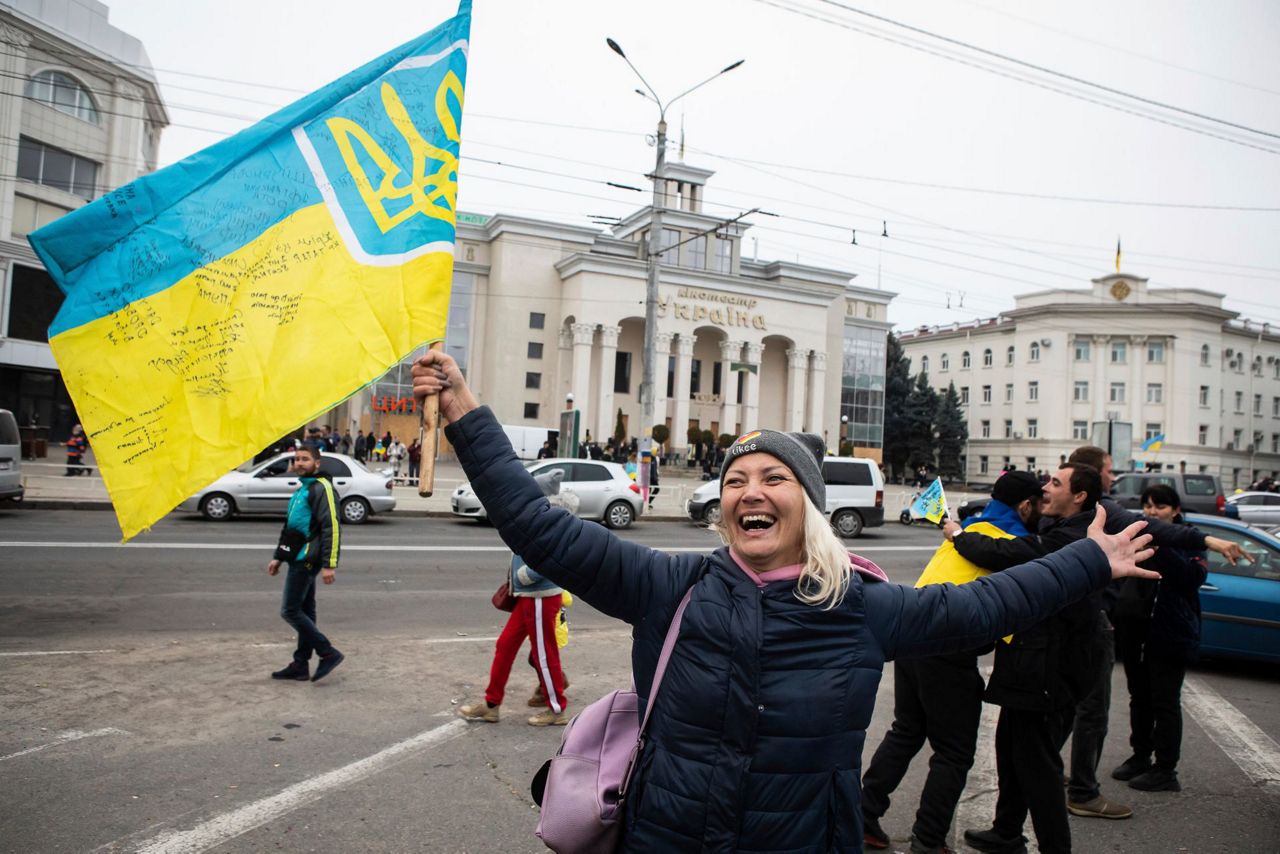 KHERSON, Ukraine (AP) – During the long, long months that Russian forces were in command, the national flag was contraband. Rarely, and in the privacy of his own home, did Yevhen Teliezhenko dare to bring out his prized possession, Ukraine’s forbidden yellow-blue.

Now the Russians are gone, driven out of his southern city of Kherson, and the 73-year-old is making up for lost time. He and his wife drive around town raising their flag and, with the enthusiasm of teenagers, asking for autographs from the Ukrainian soldiers who liberated them.

“They fought for us. We knew we weren’t alone,” he said.

And these emotions erupt despite the fact that there is no electricity, no water and hardly any mobile phone reception. Food and medicine are scarce. Life promises to be tough for the coming weeks as winter hits barely heated homes. Russia’s poisoned parting gifts were the destruction of vital infrastructure and the deadly sowing of booby traps across the city.

Nonetheless, at least hope and happiness have returned, which will be more than enough for now.

Kherson was the only provincial capital captured by Russia, captured in the first weeks of the invasion. Due to the city’s port and strategic location on the Dnieper River in southern Ukraine, it was a significant – but only temporary – award for Moscow, as it turned out.

The wide waters of the Dnieper now separate the Ukrainian troops who have been fighting their way towards Kherson for weeks, and the former Russian occupiers who abandoned the city last week in the face of the Ukrainian advance and fled to the east bank of the river.

But the fight is far from over.

Russian troops are now digging in there, preparing for the next Ukrainian move. Over the cheers of Ukrainians rejoicing in Kherson’s main square for the third Sunday in a row, the thunder of artillery fire could be heard in the distance. About 70% of the wider Kherson region is still in Russian hands.

Roads leading to Kherson bear witness to the fierceness of the fighting – much of which went largely unreported at the time because Ukraine blacked out frontline news from the region to avoid leaking useful information to the Russians. For tens of kilometers (miles) from the city, the war and its ravages have left no building untouched.

Amidst the abandoned trenches and the charred remains of military equipment, a surprising sight: children came out of devastated houses to wave to cars rolling through their village, which until recently was a war zone.

Freed from their occupiers, the residents of Kherson can now begin to tell the dark tales of life under Moscow’s rule. Some spoke of Russian soldiers holding people in the streets, seemingly at random, for the purpose of controlling and interrogating them – and sometimes worse.

Others are concerned for friends and acquaintances who were told to leave Kherson as Russian forces began their weeks-long retreat. Tens of thousands of people were evacuated, ferryed across the Dnieper and bused deeper into areas Russia still holds.

In the days leading up to their withdrawal last week, Russian troops were growing increasingly nervous and rumors were flying around the city, said Karina Zaikina, 24.

“They stole from us and put moral pressure on us,” she said. “It was clear that they were afraid because they all just ran in groups.”

“I woke up calm today,” she said. “For the first time in many months, I wasn’t afraid to go into town.”

In scenes reminiscent of European cities liberated by the Allies in World War II, residents of Kherson flocked to the city’s central square, honking their horns, dancing, crying and hugging. At one location, two people alleged to have been collaborating with the Russians were tied to poles with their hands behind their backs.

At the moment, billboards put up by the city’s former Russian-backed administrators remain. But definitely not for long.

Their now outdated message is: “Russia is here forever.”

John Leicester contributed to this story from Kyiv, Ukraine.

Follow AP’s coverage of the war in Ukraine: https://apnews.com/hub/russia-ukraine

Copyright 2022 The Associated Press. All rights reserved. This material may not be published, broadcast, transcribed or redistributed without permission.