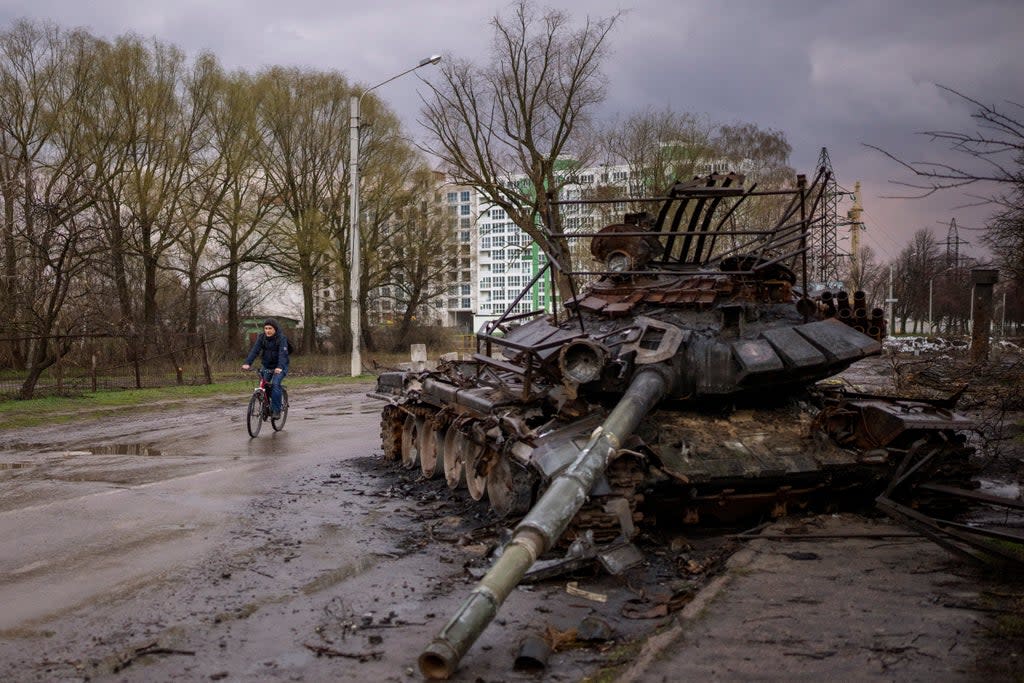 They also stressed that failures in the strategic planning and conduct of the Russian President’s military campaign in Ukraine meant that he failed to “transform numerical strength into a decisive advantage”.

He has refocused his military campaign on the Donbass region of eastern Ukraine and deployed thousands more troops in operations there.

However, his forces have so far made slow progress, being pushed back in some areas by strong Ukrainian forces.

In its recent intelligence briefing in London, the Ministry of Defense highlighted that Russia’s defense budget roughly doubled between 2005 and 2018, with investments in several “high-end air, land and sea capabilities.”

As of 2008, this underpinned the extensive New Look military modernization program, the Department of Defense said.

“However, modernizing its physical equipment has not allowed Russia to dominate Ukraine. Flaws in both strategic planning and operational execution have made it impossible for him to turn numerical strength into decisive advantages,” stressed the British defense chiefs.

“Russia’s military is now significantly weaker, both materially and conceptually, as a result of its invasion of Ukraine. Recovery from this is made more difficult by sanctions. This will profoundly affect Russia’s ability to use conventional military force.”

The Ministry of Defense estimates that around 15,000 Russian soldiers have been killed since the invasion began more than two months ago, while three to four times that number have been injured or disabled.

As the West sends more arms to Ukraine, a senior US official has warned that Russia plans to annex large parts of the country’s east later this month.

Michael Carpenter, US ambassador to the Organization for Security and Cooperation in Europe, said America believes the Kremlin is also planning to recognize the southern city of Kherson as an independent republic. Neither move would be recognized by the United States or its allies, he said.

Mr Carpenter cited information that Russia plans to hold sham referendums in the so-called Donetsk and Luhansk People’s Republics that would “try to add a veneer of democratic or electoral legitimacy” and tie the entities to Russia. He also said there were signs that Russia would hold an independence vote in Kherson.

He pointed out that mayors and local lawmakers there have been kidnapped, that internet and cellphone services have been disrupted, and that a Russian school curriculum will soon be introduced. The Ukrainian government said Russia has also adopted the ruble as its currency there.

In the bombed-out city of Mariupol on the Sea of ​​Azov, more than 100 people, including elderly women and mothers with young children, exited the rubble-strewn Azov Steel Plant on Sunday and made their way in buses and ambulances to the Ukrainian-controlled city of Zaporizhzhia , about 140 miles northwest, according to authorities and video released by both sides.

Mariupol Deputy Mayor Sergei Orlov told the BBC that evacuees are making slow progress. The authorities gave no explanation for the delay.

At least some of the civilians were apparently taken to a village controlled by Russian-backed separatists. The Russian military said some chose to remain in separatist areas, while dozens left for Ukrainian-held territory.

In the past, Ukraine has accused Moscow’s troops of taking civilians into Russia or Russian-controlled areas against their will. The Kremlin has denied this.

Russian aerial, tank and ship bombardment of the sprawling facility picked up again after the partial evacuation, Ukraine’s Azov Battalion, which is helping to defend the mill, said on the Telegram messaging app.

The evacuation of the steel mill, if successful, would represent a rare advance in alleviating the human costs of the war that has caused particular suffering in Mariupol.

Previous attempts to open safe corridors from the southern port city and elsewhere have failed, with Ukrainian officials accusing Russian forces of firing and bombing along agreed evacuation routes.

Around 1,000 civilians are believed to be at the facility along with an estimated 2,000 Ukrainian defenders ahead of the weekend’s evacuation, which was monitored by the United Nations and the Red Cross. Russia has demanded the surrender of the fighters; they refused.

Mariupol, which had a population of more than 400,000 before the war, may still have as many as 100,000 people. Russian forces have reduced much of the city to rubble, trapping civilians with little food, water, warmth or medicine.

Some residents of Mariupol left the city on their own, often in damaged private cars.

As sunset approached, Mariupol resident Yaroslav Dmytryshyn rattled in a car with a back seat full of teenagers and two signs on the rear window: “Children” and “Little ones.”

“I can’t believe we survived,” he said, looking exhausted but in good spirits after two days on the road.

“There is no Mariupol at all,” he said. “Somebody has to rebuild it, and that will take millions of tons of gold.” He said they lived across the railroad from the steel mill. “Ruined,” he said. “The factory is completely gone.”

Anastasiia Dembytska, who used the truce to leave with her daughter, nephew and dog, said she could see the steel mill from her window if she dared look out.

“We could see the missiles flying” and plumes of smoke over the facility, she said.

Ukrainian President Volodymyr Zelenskyy told Greek state television that the remaining civilians at the steel mill were afraid to board buses for fear of being taken to Russia. He said he had received assurances from the United Nations that they would be allowed to go into areas controlled by his government.

More than a million people, including nearly 200,000 children, have been brought to Russia from Ukraine since the Russian invasion began, the Russian Defense Ministry said on Monday, according to TASS.

Defense Ministry official Mikhail Mizintsev said the number in the past 24 hours was 11,550 people, including 1,847 children, “without the involvement of the Ukrainian authorities.”

According to the report, these civilians were evacuated “from the dangerous regions of the Donetsk and Luhansk People’s Republics” and other parts of Ukraine to the territory of the Russian Federation. No information was given.

Mr Zelensky also said that at least 220 Ukrainian children have been killed by the Russian army and 1,570 educational institutions have been destroyed or damaged since the war began.

The governor of the Odessa region along the Black Sea coast, Maksym Marchenko, told Telegram that a Russian missile attack on an Odessa infrastructure target on Monday caused deaths and injuries. He did not give details. Mr Zelensky said the attack destroyed a dormitory and killed a 14-year-old boy.

Ukraine said Russia also attacked a strategic road and rail bridge west of Odessa. The bridge was badly damaged in previous Russian attacks, and its destruction would cut off a supply route for weapons and other cargo from neighboring Romania.

The Kansas-Missouri Border War Isn’t Over Yet | Guest Comments