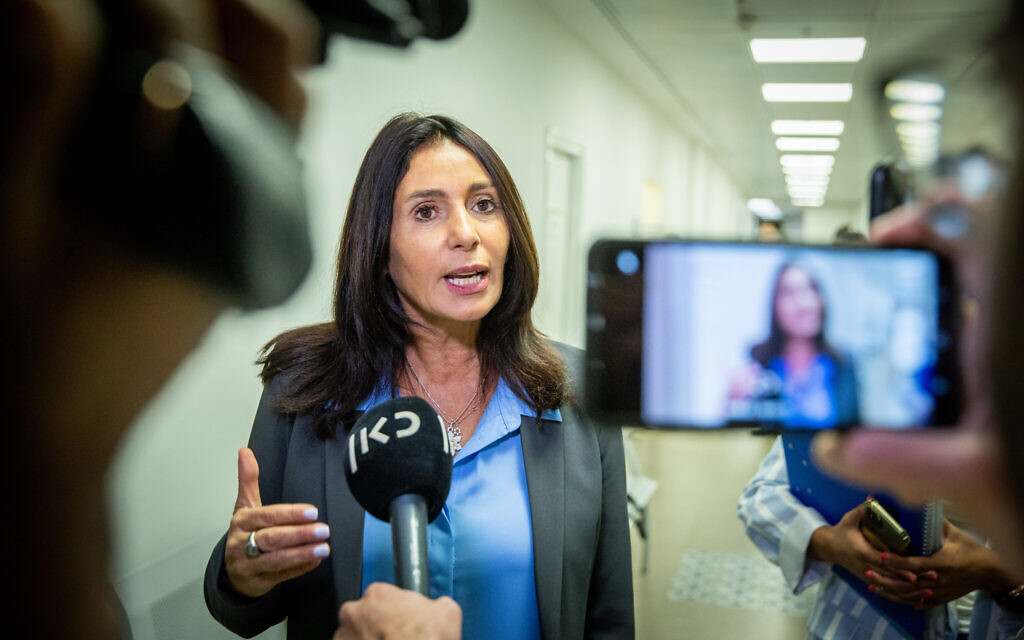 Likud MK Miri Regev said on Tuesday that a leaked recording of her statement that the opposition should vote against laws that benefit victims of violence and disadvantaged populations warranted no apology, adding that her remarks had been “taken out of context”.

“I have nothing to apologize for,” Regev said.

In the notes, the MK had said such tactics were legitimate as part of the opposition’s effort to overthrow the government and deny it any significant gains.

Speaking to the media on Tuesday, Regev instead blamed the person who leaked the footage.

“The person who should apologize is the one who attended the faction meeting and took this grave measure of recording it and taking things out of context,” she said.

The right-wing lawmaker could be heard making controversial comments about rape victims, battered women and soldiers in recordings aired behind closed doors on Channel 12 news on Monday after a Likud faction meeting. Lawmakers debated how party members would vote on a popular coalition bill aimed at partially covering tuition fees for war veterans.

The law, which was amended at the last minute to increase coverage from 66 percent to 75 percent, was passed early Tuesday morning, with the change prompting the Likud and much of the opposition to stay away from voting rather than actively oppose it to deliver.

Defense Secretary Benny Gantz attends a plenary session in the Knesset on May 23, 2022. (Yonatan Sindel/Flash90)

“We have decided as a party that we will be a fighting opposition and that we want to overthrow this government,” Regev said at last week’s meeting.

“So there is no stomach ache [when voting against] Soldiers or beaten women or cases of rape because we all understand that’s the rationale,” she said.

On Tuesday, Regev called the footage “a serious case of deliberate leaking of half-truths” and insisted her remarks were taken out of context.

“At the faction meeting, I said one very clear thing: we have a role – to overthrow this dangerous coalition that cannot even pass a law without the opposition,” she said.

“My years of work for the combat soldiers, the disabled and the vulnerable are well known,” she said. “I said that the opposition’s role is to overthrow the coalition and not allow it to manipulate public consciousness against us. We really care about these populations, it’s not imaginary tummy ache, it’s real. Because they are important to us,” Regev said.

“We’re supposed to be making demands and not cave in to the coalition and the proof is that suddenly at 1am they found a budget for 75 per cent coverage. If they cannot pass Zionist laws without us, they have no right to exist,” she added.

Regev’s comments before the vote sparked outrage not only from coalition MPs, who were quick to say the recording exposed the cruelty of the opposition, but also from activists and aid organizations.

Prime Minister Naftali Bennett, Secretary of State Yair Lapid and Secretary of Defense Benny Gantz attend a plenary session in the Knesset on May 23, 2022. (Yonatan Sindel/Flash90)

Orit Sulitzeanu, executive director of the Association of Rape Crisis Centers in Israel, criticized Regev for her comments and urged her to apologize.

“We have stomachaches from MK Regev’s comments,” she said. “We would like to mention that sexual violence is not influenced by coalition or opposition considerations, but it does affect Likud voters who have sent Regev to represent them on a daily basis. We urge Members of the Knesset to remember their job and apologize for their comments.”

Activist Lili Ben-Ami, whose sister Michal Sela was murdered by her husband in 2019, said political considerations should not overshadow certain issues, adding that “there is no opposition and no coalition when it comes to this life of a person goes”.

“We are all one to make this world safe. Any proposal that is on the legislative table aimed at preventing the next murder and reducing violence and pain for victims must be approved,” she said.

Lili Ben-Ami, whose sister Michal Sela was murdered by her husband in 2019, is seen after a court hearing December 26, 2021 at the Jerusalem District Court. (Flash 90)

Lavi Naor, spokeswoman for the Federation of Organizations for People with Disabilities in Israel, said Regev’s “true face” was revealed through her comments.

“I can only tell you one thing, MK Miri Regev – when it comes to underprivileged populations, there is no doubt that the state must help them and not harm them,” Lavie said.

“Today we saw your true face. You don’t differentiate between the citizen who needs help and your wars in the Knesset. In wars there are losers, and today we were shown that the underprivileged are not part of the people of Israel [in your eyes],” he said.

After Regev made her comments at the meeting, Likud MK Yuval Steinitz was heard to intervene, arguing that supporting the bill for combat veterans would lead to further pressure to work with the coalition on other bills.

“Next it will be widows, orphans, the periphery, a million and one disabled, the sick, the aged and the Holocaust survivor, everything,” he said.

“The lack of empathy and indifference towards the public by the speakers in the recording is fully revealed,” she said.

“Who are they supposed to represent? I don’t understand why they got into the Knesset. For what? For the seat or to represent [us]? So they don’t care about widows, Holocaust survivors and discharged soldiers. Her true colors were revealed at the end,” Avital said.

Thanks,
David Horovitz, founding editor of the Times of Israel