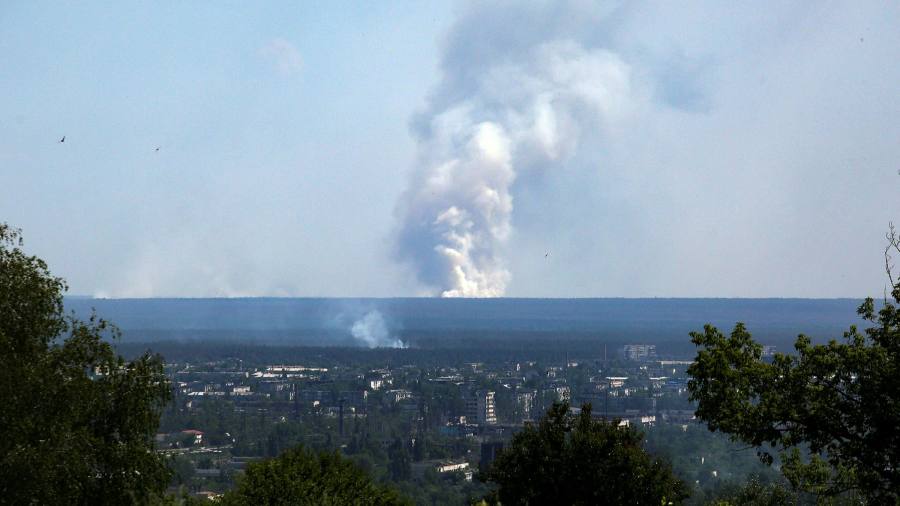 Russia launched a spate of missile attacks on Ukraine early Saturday, escalating hostilities a day after Ukrainian troops withdrew from the contested city of Severodonetsk.

As Russia’s full-scale invasion of Ukraine entered its fifth month, regional governors reported attacks on military bases in western Ukraine’s Lviv region, in Zhytomyr west of Kyiv and in Chernihiv northwest of the capital.

Early reports did not indicate a high number of casualties, but Mykhailo Podolyak, an adviser in the government of Ukrainian President Volodymyr Zelenskyy, said civilian targets had been hit.

Podolyak said in a tweet: “48 Russian cruise missiles. At night. All over Ukraine.”

“Russia is still trying to intimidate Ukraine, incite panic and make people afraid of Z monsters,” he added, referring to the use of the letter Z as a designation for some of the Russian invading forces.

The attacks came just before Ukrainian officials said most troops had withdrawn to more fortified positions from Severodonetsk, the provincial capital of the eastern Luhansk region, which a Russian artillery attack had essentially destroyed.

Nearby Lysychansk is the only remaining major city in the Lugansk region that did not fall victim to Russian occupation. Ukraine still controls some major western cities in the nearby Donetsk province west of Lysychansk.

After failing to capture Kyiv and other major northern cities early in its invasion, Moscow has more recently focused on gaining ground in the Far Eastern and southern coastal regions. It now controls 20 percent of Ukrainian territory.

Throughout the conflict, Russia has carried out missile strikes almost daily. According to Ukrainian officials, more than 1,400 were fired, targeting infrastructure and military installations in an attempt to stop heavy arms shipments from Kiev’s western backers.

Russia has previously fired Iskander surface-to-surface missiles from Kremlin-ally Belarus, and Ukraine’s military intelligence said Saturday’s airstrikes were all fired from Belarusian territory. These included 12 cruise missiles fired from Minsk airspace by Russian Tu-22M3 bombers, in what Kyiv says is the first time this has happened.

“Today’s rocket attacks were all carried out overnight from Belarus territory. . . From the air and from the land,” said Brigadier General Kyrylo Budanov, head of Ukraine’s Defense Intelligence Service.

Putin told his Belarusian counterpart Alexander Lukashenko on Saturday that Russia will send the missiles, which have a maximum range of up to 500 km, “in the next few months”.

Lukashenko called on Putin to equip Belarusian warplanes with nuclear weapons, which he said was necessary “to protect our Fatherland from Brest to Vladivostok” from what he described as a NATO threat. Putin refused, but suggested upgrading the Belarusian fleet of Soviet Su-25 fighter jets in Russia.

The Belarusian strongman has abandoned a geopolitical balancing act in recent years, teaming up with Putin by allowing Belarus to be used for air and missile strikes during Russia’s invasion of Ukraine.

At the beginning of the invasion, Belarus allowed Russian forces to advance towards Kyiv from its territory, but did not deploy any forces of its own.

Budanov said Moscow is provoking us “to attack Belarus again” to create “an excuse” for Belarusian President Alexander Lukashenko to join the Russian invasion.

Russia was also planning terrorist attacks in Belarus, Budanov said, blowing up homes, schools and hospitals in a false flag operation that Kyiv would be blamed for.

Lukashenko “is trying to avoid that,” Budanov said, adding, “He understands how this is going to end for him.”