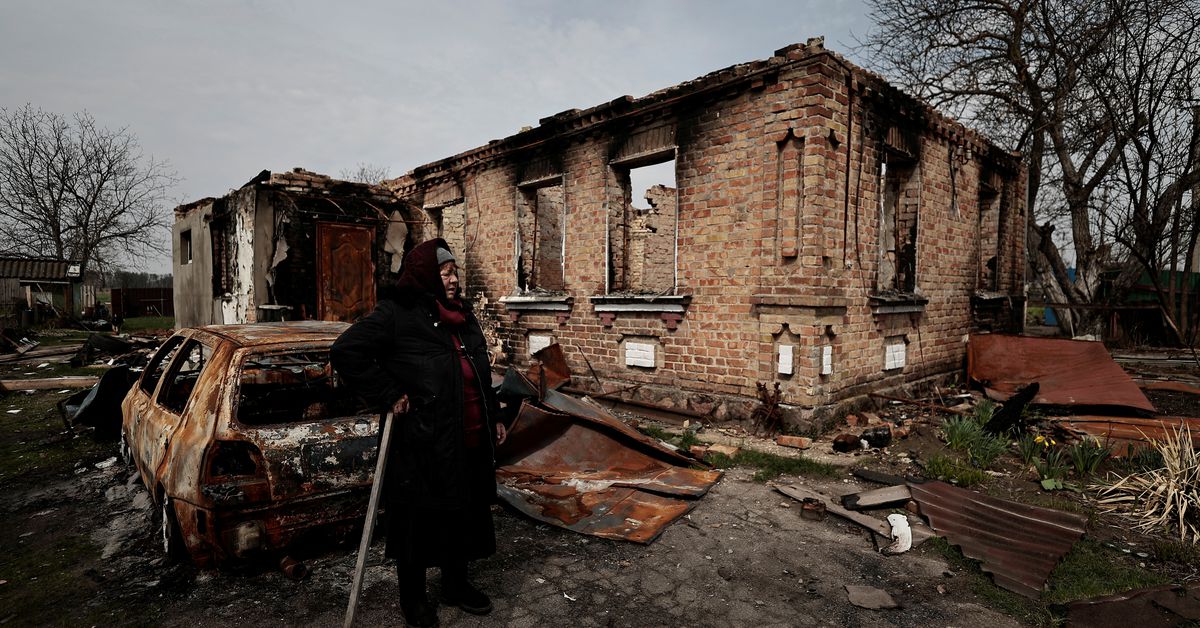 Kyiv/MARIUPOL, Ukraine, April 23 (Reuters) – Russia has resumed its attack on the last Ukrainian defenders holed up in a huge steelworks in Mariupol, a Ukrainian official said on Saturday, days after Moscow claimed victory in the southern port city declared that his troops did not need to take the factory.

Russian forces have hit the Azovstal complex with air strikes and are trying to storm it, said presidential adviser Oleksiy Arestovych, adding “the enemy is trying to strangle the last resistance of Mariupol’s defenders”.

The conflict’s biggest battle has been raging for weeks as Russia tries to seize a city believed to be crucial in its attempts to link the eastern Donbass region with Crimea, the Black Sea peninsula that Moscow captured in 2014.

Russia’s Defense Ministry said on Friday the remaining fighters were “safely blocked” at the steel mill. On Thursday, President Vladimir Putin declared the city “liberated” and ordered his defense minister to cordon off the Azovstal complex “so that not even a fly can get through” instead of trying to storm it.

“There is no need to climb into these catacombs and crawl underground through these industrial plants,” Putin said on television.

Arestovych said Ukrainian troops in the Azovstal complex would still hold out and attempt counterattacks “despite the very difficult situation.”

According to Ukrainian authorities, more than 1,000 civilians are entrenched with the troops at the Azovstal plant. Continue reading

Russian troops besieged and bombarded Mariupol – home to more than 400,000 people before the war – for weeks, leaving a city in ruins. Ukraine estimates tens of thousands of civilians have died and says 100,000 civilians remain. The United Nations and Red Cross say the number of civilian casualties is at least in the thousands.

Maxar Technologies, a US company, said on Friday that satellite images from near Mariupol showed a second cemetery had been expanded at Vynohradne in late March and early April, with long new trenches likely to become new burial sites.

The company said Thursday that its images found a separate burial site elsewhere near the city with more than 200 graves.

Russia has said the invasion it launched on February 24 was a “special military operation” to demilitarize Ukraine and rid its people of dangerous nationalists. Moscow has denied attacking civilians.

Ukraine and its western allies call the invasion an unjustified war of aggression.

On Saturday, Lugansk Governor Serhiy Gaidai said Ukrainian forces would withdraw from some settlements to new defense lines to protect their units amid a mounting barrage on all towns in the region.

“It is uncomfortable that they are leaving our settlements, but it is not a disaster,” Gaidai added.

Cars destroyed in Russia’s attack on Ukraine are pictured after being collected at various locations in Hostomel, Kyiv region, Ukraine, April 23, 2022. REUTERS/Zohra Bensemra TPX IMAGES OF THE DAY

Russia’s current offensive is focused on the Donbass, where Moscow-backed separatists have held parts of the constituent regions of Donetsk and Luhansk for years.

The governor of Kharkiv, a heavily bombed city northwest of the Donbass, said Russian forces had carried out over 50 artillery or rocket attacks in the region over the past day, killing two people and wounding 19.

Governor Oleh Synegubov said intense fighting continued in the frontline town of Izyum, south-east of the city, and that Ukrainian forces had recaptured three villages to the north-west.

Russia said Saturday it shot down a Ukrainian fighter jet and destroyed three Ukrainian helicopters at an airfield in Kharkiv.

There was no immediate reaction from Ukraine to the Russian claims, but Ukraine’s military said Saturday it had destroyed 177 Russian planes and 154 helicopters since the war began.

Reuters could not independently verify the claims.

Russian forces have made no major advances in the past 24 hours, British military intelligence said on Saturday.

On Friday, Russian General Rustam Minnekayev said Moscow wants control not only of Donbass but also of southern Ukraine, proposing broader targets for the invasion than Russia had previously acknowledged. Continue reading

Minnekayev, deputy commander of Russia’s Central Military District, was quoted by Russian state news outlets on Friday as saying full control of southern Ukraine would give him access to Transnistria, a breakaway Russian-held part of Moldova to the west. Continue reading

That would cut off Ukraine’s entire coastline, leading Russian troops to advance hundreds of kilometers further west, past the major coastal city of Odessa.

Following Minnekaev’s comments, Ukrainian President Volodymyr Zelenskyy said that the invasion of Russia was only the beginning and that Moscow had plans to conquer other countries.

“We’re first in line. And who’s next?” he said in a video address late Friday.

Kremlin spokesman Dmitry Peskov declined to comment on whether Russia has expanded its targets or how Moscow views southern Ukraine’s political future.

Zelenskyi also said in his speech that Ukraine’s allies would finally deliver weapons that Kyiv had asked for.

US President Joe Biden said Thursday he had approved an additional $800 million in military aid to Ukraine, including heavy artillery, ammunition and drones. Canada said on Friday it had made more heavy artillery available to Ukraine. Continue reading

USA in “the most dangerous time in history”: Donald Trump