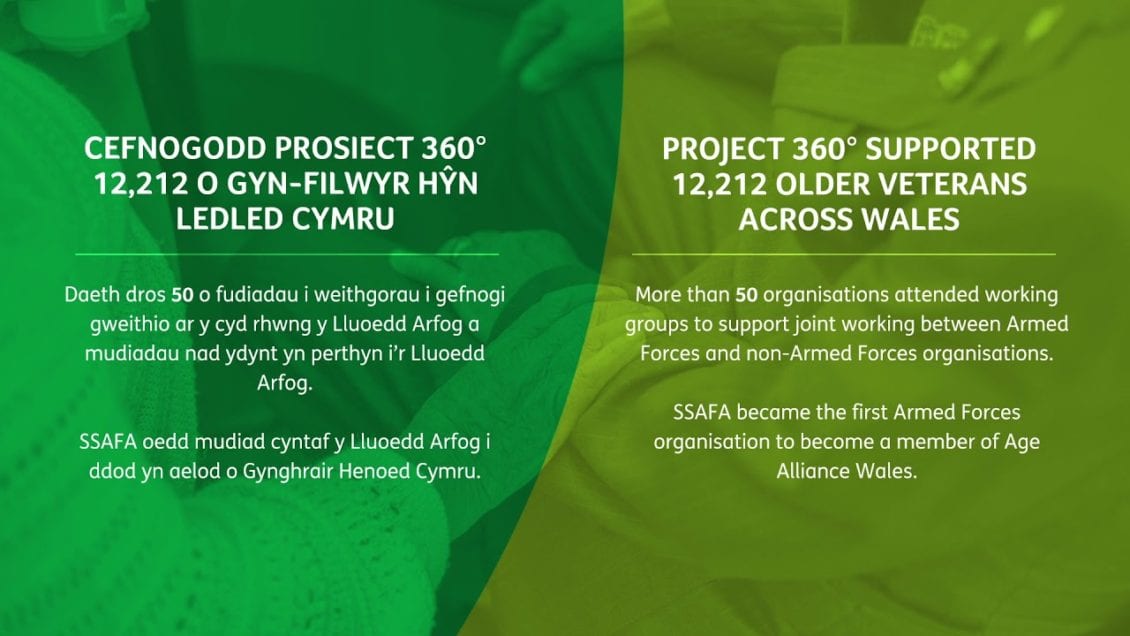 
Project 360 ° released a special video ahead of Armed Forces Day on June 26, 2021 celebrating its accomplishments and legacy of supporting military veterans living in Wales.

Project 360 ° was a national partnership between Age Cymru, Woody’s Lodge and Age Alliance Wales to help military veterans in Wales aged 65 and over. Funded by the Aged Veterans Fund, it ran for three years until June 2020. The aim of the project was to improve the services for older veterans by the project partners while keeping older military veterans at the center of the process. During the three-year period, Project 360 ° supported a staggering 12,212 senior veterans across Wales, with much of the support being based on in-depth research with more than 1,000 veterans.

The film particularly focuses on the work of Woody’s Lodge, which over the three years supported 5,672 senior veterans at its 11 support centers in North, South and West Wales. Woody’s Lodge hired support officers to help fill out forms and gave veterans access to financial benefits valued at £ 320,000 in retrospective payments. The officers also assisted with health and welfare assistance for the veterans.

The film also shows how the project worked with non-military organizations to help them understand how best to support veterans, many of whom are reluctant to work with civilian organizations. It delivered a training package for the armed forces community to 353 Age Alliance Wales employees, provided grants totaling £ 100,000 to seven Age Alliance veteran support projects, and developed a range of resources to help organizations work with senior veterans .

Despite being a three-year project, much of Project 360’s work will leave a legacy of support for senior veterans and the organizations that choose to support them. The Twenty Alliance Wales organizations now ask, “Have you served in the armed forces?” in data collection processes to identify veterans, while five grant-funded projects received additional funding to continue working with older veterans beyond the project’s lifetime. The project also launched an awareness campaign featured on BBC Wales news and the Financial Times to promote armed forces pensions and war pensions.

Victoria Lloyd, CEO of Age Cymru, said: “The 360 ​​° project has changed the landscape for many senior veterans in Wales seeking support from health and social services, including third sector organizations. In the past, many organizations did not know that the elderly people who sought their support were veterans and therefore may need a more tailored form of support.

“At the same time, many veterans would not seek support because they might feel that their particular conditions, such as post-traumatic stress disorder, were not understood by care providers. Hopefully the work of Project 360 ° will help bridge the gap between senior veterans in need of assistance and those organizations that are able to provide that assistance for many years to come.

Dr. David Trotman, Chairman of Woody’s Lodge Board of Trustees, said: “We were delighted to be part of Project 360, which is working with partners Age Cymru and Age Alliance Wales to enable our seasoned veterans across Wales to do what it is enables us to continue and expand our support work for the future. “