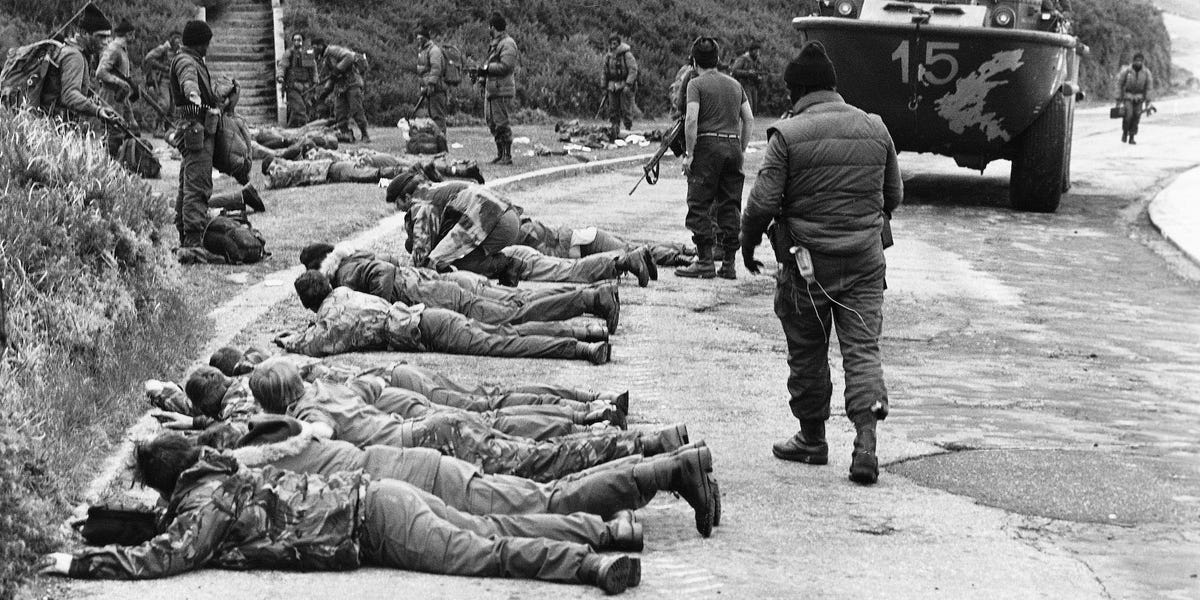 In April 1982, Argentine commandos landed in the Falkland Islands, a remote, rugged archipelago in the South Atlantic.

The Falkland Islands were British territory claimed by Argentina, and the invasion came after years of tension between the British government and Argentina’s ruling military junta.

Once on the ground, the Argentine special forces went straight to the British governor’s house, the seat of local government. The small garrison of Royal Marine Commandos barricaded themselves there, but surrendered after a short, fierce firefight.

Photos of captured British troops – marching with their arms raised or lying flat on their stomachs – soon circulated around the world as Argentines partied in the streets, adding to British feelings of humiliation.

British Prime Minister Margaret Thatcher promised a strong response given her own domestic challenges. The clash that ensued was one of the largest but least-remembered conflicts between major forces of the second half of the 20th century.

A Conflict of the “First”

Just 300 miles from mainland Argentina, the Falkland Islands have been a sore point between Argentina and Britain for centuries. Argentina has contested British control of the islands since British settlers colonized them in the 19th century.

In many ways the Falklands War was a conflict of the “First”. Both sides had competent militaries with strong air, sea and ground forces, making it the first major conventional combined arms conflict since World War II.

On the afternoon of May 2, the British nuclear submarine HMS Conqueror fired three Mark 8 torpedoes at the ARA General Belgrano, an Argentine light cruiser. Two torpedoes found their target, sinking the warship and killing 323 of its 1,100-strong crew.

The Conqueror was only the second submarine to sink a warship in combat since World War II – a distinction it still holds.

As the British Armada approached the islands in the spring of 1982, the famous British Special Air Service launched their largest commando attack since the end of World War II.

On the night of May 14, an SAS squadron of about 45 soldiers attacked Argentina’s Pebble Island air base. Argentine attack aircraft stationed there could threaten the British invading force en route to the Falkland Islands.

The raid was successful. SAS operators destroyed all 11 aircraft at the airbase and knocked out a radar station without suffering serious casualties. A few days later, however, 18 SAS soldiers, some of whom had been at Pebble Island, were killed when a Sea King helicopter crashed into the Atlantic during a routine inter-ship flight.

The war almost saw another first at sea.

The aircraft carriers of the two navies almost became involved in the first aircraft carrier battle since World War II. Only the weather prevented the Argentine ARA Veinticinco de Mayo and the British HMS Invincible and HMS Hermes from colliding in the South Atlantic.

Both navies were very concerned about each other’s anti-ship weapons throughout the war. Argentine missiles claimed one of the container ships the British had converted into an aircraft carrier and the destroyer HMS Sheffield, the first Royal Navy warship to be sunk since World War II.

Educational to this day

Chinese military planners have examined the Falklands War for potential similarities to a conflict with Taiwan, particularly if the US comes to Taiwan’s defense. Beijing regards Taiwan as a breakaway province and has vowed to take it over, by force if necessary.

The SAS and their naval brothers, the Special Boat Service, were critical to the British victory.

The Chinese military may wish to replicate this British success, using special forces to undermine Taiwan’s defenses and pave the way for conventional Chinese forces.

The Falklands War was one of the most complex conflicts of the 20th century, but it has largely been forgotten. Forty years later, however, it still influences the doctrine and planning of militaries around the world.

Stavros Atlamazoglou is a defense journalist specializing in special operations, a veteran of the Hellenic Army (national service with the 575th Marine Battalion and Army Headquarters) and a graduate of Johns Hopkins University.