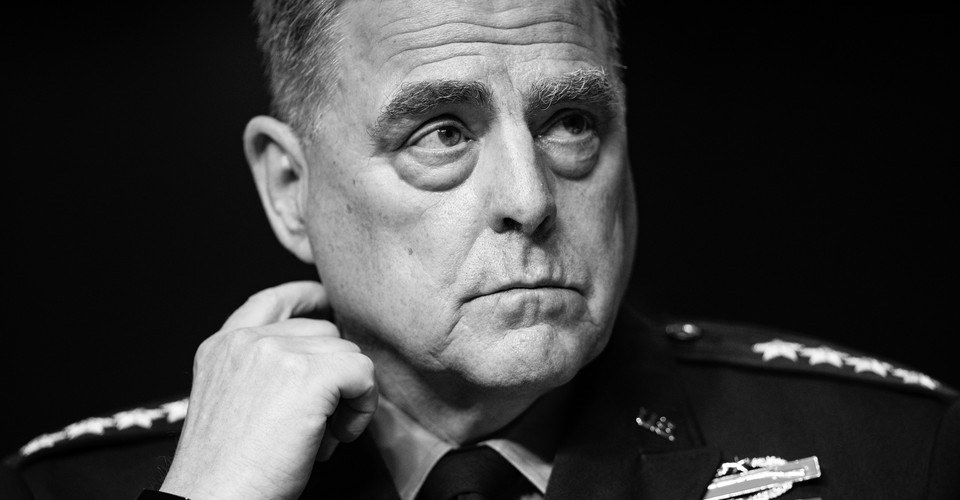 The growing politicization of the American military


The nation’s senior military adviser General Mark Milley is back in the news for reportedly calling President Donald Trump’s rhetoric post-election “a Reichstag moment” and privately assuring friends and members of Congress that the president and his own Supporters “could try, but they will not succeed” to prevent the peaceful transfer of power.

As reported by CNN, “Milley spoke to friends, lawmakers and colleagues about the threat of a coup,” and although journalists mostly told either private conversations or actions Milley was planning – that is, giving him credit for things he might have done but not – the comments cast a flattering light on him, a soldier who loyally defends democracy.

And while some of the sources and the topic itself may be trying to reconstruct an image tarnished by Milley’s decision to march across Lafayette Square in riot suits with Trump in nationwide protests, the American military has still done an admirable job of breaking the interregnum between the Navigating elections and inauguration. The right role for our armed forces in domestic upheaval is not one, and that is what the American people seem to have in this election. Milley deserves credit for this, as well as for the other restrictions he placed on the President’s impulse during his tenure. He should be rated like an Olympic diver, with a level of difficulty factored into his score.

Where he deserves more criticism is his testimony before Congress a few weeks ago. Then Milley advocated military reading lists, including books on the hot political topic of critical racial theory. “I read Mao Zedong. I read Karl Marx. I’ve read Lenin, ‘said Milley. “That doesn’t make me a communist.” It was a good line, funny and wise. And if he had stopped there, he would have won a victory. But he went on to link racism to the attack on the Capitol: “I want to understand white anger … What drove thousands of people to attack this building and try to overthrow the United States Constitution?” “

And that made his testimony a political judgment, the latest step in the ongoing erosion of America’s relations with its military, which was being dragged ever further into the political arena. Milley may have tried to protect the military by wrapping himself in the flag and virtuously defending the Constitution, but the effect of his words has been to join the wider political struggle over racial issues.

George Packer: It is not too late to avert a historical disgrace

The modern era of civil-military relations dates back to 1973 when the United States ceased conscription of its armed forces. The “volunteer-only force” relies on public admiration, competitive pay and benefits, the prospect of adventure, opportunities for professional education and advancement, patriotism, and the appeal of citizenship to recruit the 0.5 percent of the American population who are eligible for the occupation of our military are required. It has made the military by far the most trusted and beloved institution in American society – and politicians love to stand up, bond with them, and use them as a political stick.

Because obedience is a duty in the military; The desired changes in our society can be implemented in their ranks, as was the case with racial integration. Politics is supposedly an abomination in power. The leaders proudly declare that they are apolitical, and some even refuse to vote so as not to harm themselves to future commanders in chief. The ingrained subordination of our military to elected civilians means that the President and Congress determine how our military is different from the rest of society.

Over the years, however, political, social, and legal impulses have often been dampened by consideration for the military’s perceived needs for recruitment, retention, and cohesion. Such was the case with the “Don’t Ask, Don’t Tell” policy, which allows gays, lesbians and bisexuals to serve, and the exclusion of women from combat units. The military is also often thrown into the political clashes of the day, as much as its leaders prefer to avoid: think of Senator Ted Cruz, who scourged the army for becoming “an awakened, emasculated military,” or Senator Tom Cotton and MP Dan Crenshaw, the military “whistleblower” who oppose “lively ideology”.

The apolitical norm was first challenged in 1988 when former Marine Corps Commander Paul X. Kelley presided over Veterans for Bush to support George HW Bush’s presidential campaign, and it has accelerated to the point at Campaigning now has hundreds of senior veterans recruiting endorsements and routinely using military imagery to indicate military support. (Many veterans claim to speak for the force and are treated as proxy for military opinion, but it would be a mistake to believe that the uniformed men think in lockstep: unofficial polls suggest the officer corps is a little more conservative than American Society in general, while the grassroots are slightly more liberal.) Military leaders condemn this practice of veteran advocacy because they believe it draws the military into policies that are detrimental to the well-being of the force. What is true. Americans have begun to see our military the way we see the Supreme Court: apolitical when it supports our political preferences, shamefully partisan when it doesn’t.

Trump intensified the corrosion of civil-military norms. He no longer appointed senior veterans than President Barack Obama, but called them “my generals,” and their acceptance of the appointment indicated their support for his policies. He signed the Pentagon’s Muslim travel ban, gave campaign speeches to troops, overturned judgments by military courts, and often claimed that the military had overwhelmingly voted for him.

Milley is himself an imperfect defender of civil-military distinction. During last year’s Black Lives Matter protests, he marched in uniform next to Trump across a public square that was forcibly cleared by demonstrators. Milley damaged our military’s relationship with the American people that day, as he later admirably admitted. Navigating the high shallows of this political moment cannot be easy or enjoyable, especially for a military officer who is not versed in politics, as our officers are by nature. The military as an institution educates them to avoid politics and distrusts them when they become political.

Political scientist Risa Brooks argues that the military shouldn’t even try to be “apolitical” because it blinds them to the political implications of their actions. The armed forces should be “politically aware”, she writes, “so that they can distinguish between negative and partisan behavior”. Milley’s statement, however, provides a useful example of the practical difficulty in applying her yardstick. Milley clearly felt that he made a distinction between negative and partisan behavior, but his choice of how to approach that leaves the military open to legitimate criticism of partisan behavior.

In his testimony, Milley entered wide-ranging political territory and raised the question of whether it is actually the task of the military to devote education and training resources to these issues. Cotton is not mistaken that military efforts could be better geared towards professional responsibility.

One could argue that racism is a matter of professional military responsibility. We have a military that must be recruited from across American society and seek to reflect them and bring them together towards a common goal, so eradicating racism is important to unit recruitment and cohesion. Milley touched these issues lightly, but only in the midst of an extensive discussion of the history of institutional racism in American society. That is, he briefly spoke of military action while dealing with a political subject.

That Milley opted for engagement at all – he interjected to answer a question put to Secretary of Defense Lloyd Austin – was itself a mistake. The great criminal defense attorney Clarence Darrow advised his clients that “no man has ever been convicted on testimony he did not give”. Milley should have taken this advice to heart in her testimony. Instead, he voluntarily exposed the military to further involvement in the political conflicts of the moment, which were characterized by feverish temperaments and high stakes.

Did Nnamdi Kanu actually jump the bail? By Aloy Ejimakor