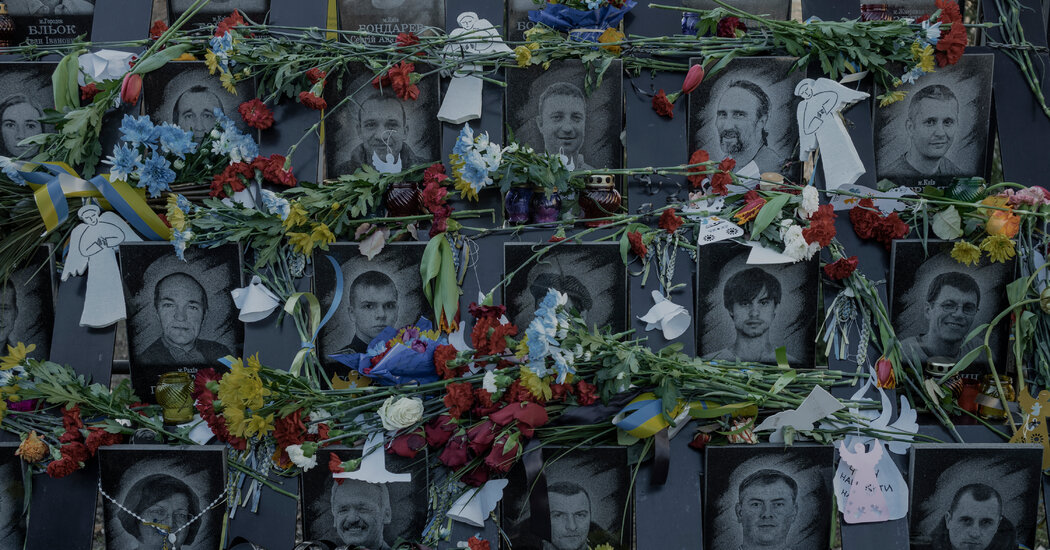 The latest on Biden, Russia and the Ukraine crisis: live updates

KIEV, Ukraine – Even as rocket attacks continued in eastern Ukraine and while Russian soldiers remained gathered at the borders for what Western leaders are calling an imminent invasion, people in the Ukrainian capital Kiev paused on Sunday to remember another moment of danger: the shooting down by dozens of protesters from the Ukrainian government, which was then allied with Moscow, eight years ago.

A ceremony honoring the “Heavenly Hundred”, as those killed here on February 20 and 21, 2014 are called, was held on Sunday morning on Maidan Square, the site of the massacre. Further commemorations were planned in Kiev and elsewhere in Ukraine.

The ceremony began with a performance of the national anthem, followed by a gun salute and a solemn procession of people laying flowers at the site where many were killed.

Iryna Horbachova said with tears in her eyes as people fought back then that the nation was ready to fight again.

“For our identity, for our freedom,” she said.

“For our right to live in the Ukraine we want. Not the way Putin and Russia want us to be,” referring to Russian President Vladimir V. Putin.

Ukraine’s current government is evoking the spirit of the 2014 protest movement to mobilize the nation as it faces a far greater threat – a crisis that, like the previous one, stems from Moscow’s desire to prevent Ukraine from getting involved approach west.

President Volodymyr Zelenskyy, who visited the square on Sunday, said the people who died gave their lives “for the right to live in an independent state, in the family of European nations.”

“Your performance is a testament to the steadfastness of Ukrainians who continue to fight for their future,” he said.

It was a decision by then-President Viktor F. Yanukovych not to sign an agreement that would have brought Ukraine closer to the European Union that prompted tens of thousands of people to take to the streets in late 2013. As the protests grew, Maidan Square in central Kiev became the focus of international attention – and then global shock at the killings.

The demonstrators persevered at great personal risk. For days, they threw their tents, sleeping bags and countless tires onto a fire barrier in hopes of repelling security forces.

After the massacre in the square, Mr Yanukovych negotiated a deal with French and German mediators to remain in power in exchange for a promise of early elections. But the protesters negotiated their own deal with middle security service commanders, who understood Mr Yanukovych intended to stay in power by blaming them for the shootings.

As part of the agreement, police commanders cleared the city to avoid prosecution, but left Yanukovych and his inner circle without police protection.

Mr Yanukovych fled to Russia, and the Ukrainian parliament voted to oust him from office. New elections took place. But Moscow soon reacted. Their soldiers, insignia removed from their combat fatigues (Ukrainians referred to them as “little green men”), conquered Crimea. And in the eastern Donbass region, a Russian-backed separatist movement emerged, sparking an armed conflict that has never stopped and is now sharply increasing again.

There the shelling increased significantly on Saturday. Separatist leaders have been pushing for a mass evacuation to Russia and calling men to arms – with no evidence claiming Ukraine is planning a full-scale attack on territory they control.

Just as many Ukrainians were stunned in 2014 that a massacre could take place in their capital, some find it difficult to accept that a full-scale Russian invasion of Ukraine is possible. The idea that Russia is planning “the biggest war in Europe since 1945,” as British Prime Minister Boris Johnson warned in a BBC interview this weekend, is something many in Kiev simply refuse to believe.

Mr Zelensky also cited the nation’s recent history in Munich on Saturday when he urged Western leaders to impose sanctions on Russia now, before an invasion takes place.

“Eight years ago,” he said, “Ukrainians made their choice, and many gave their lives for that choice.”

With the US warning that war could engulf Ukraine any day, I went to the central square in Kiev on Sunday to see a memorial significant in many ways helps to explain the current crisis.

That was here, in the capital Dozens of protesters were killed in February 2014 by snipers and police as then-Kremlin-backed President Viktor F. Yanukovych tried to stay in power.

Ever since I arrived in Kiev, I’ve noticed how quiet the city is. Sunday’s memorial service helped me gain some insight into the reasons. for residents, The threat posed by Russia is not new. The war started on this square eight years ago.

but the pressure of the moment was obvious in the eyes of Iryna Horbachova. “Of course there’s a sense of fear,” she told me. “You know that feeling doesn’t make you pack your bags. This feeling forces you to be strong.”

After we talked, a band played a somber 1940’s song about the war. inside, A son tells his mother not to cry. He will fight and maybe die, but he will die noble. It was the same song the crowd sang after the 2014 massacre.

This was one of several events commemorating the day across the country. As I walked I looked at the faces of the dead posted near the death site. it is known as the Alley of Heroes. And on this anniversary, it took on extra meaning.

Read more about the tensions between Russia and Ukraine: