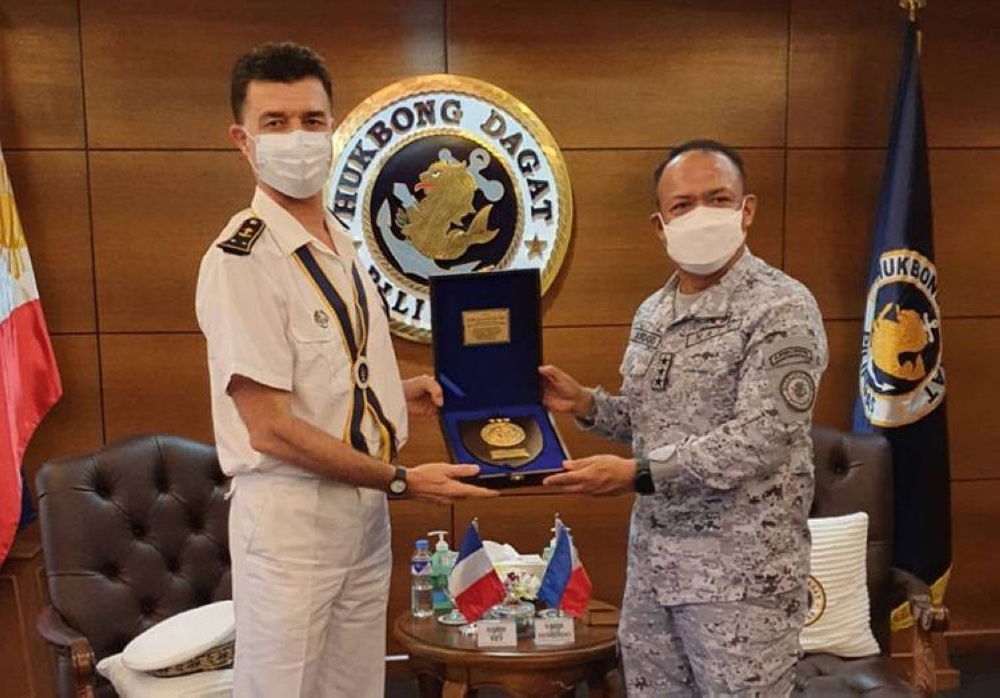 Rear Admiral Jean-Mathieu Rey, Joint Commander of French Forces in Asia-Pacific (Alpaci), ended his two-day working visit to Manila with the aim of meeting Philippine military and defense officials and demonstrating France’s commitment to a free, secure and open Indo- Pacific based on respect for international law and multilateralism.

During these meetings, the militaries reaffirmed their willingness to expand the operational bilateral engagement between the French and Philippine Armed Forces in the areas of Humanitarian Assistance and Disaster Relief (HADR) and discussed the possibility of conducting joint patrols in the EEZs to develop our interoperability.

“With the Philippines, we share a common interest in areas like humanitarian aid. We face the same threat of natural disasters in our overseas territories. The second area is the protection of our exclusive economic zone. We share the same need to protect our resources in our EEZ against threats such as illegal fishing,” said Rear Admiral Rey.

The French Commander-General also addressed the National Defense College of the Philippines, where he highlighted France’s Indo-Pacific strategy and the importance of strengthening cooperation with France’s partners in the region to maintain a rules-based regional order.

From French Polynesia, Rear Admiral Rey leads the joint French forces operating in the Asia-Pacific region and helps protect the French territories and its 1.6 million citizens in the Indo-Pacific region.

This joint force, made up of assets from the French Navy, French Aerospace Forces and French Naval Infantry regiments, also works with its partners in the region to implement France’s Indo-Pacific strategy, particularly ensuring compliance with international law , the freedom of navigation, the promotion of multilateralism and the fight against nuclear proliferation.

On March 8, the Floréal-class light surveillance frigate Vendémiaire arrived in Manila as part of its routine mission from Vietnam to demonstrate freedom of navigation and facilitate interactions between French and Philippine naval officers.

Defense Minister Delfin Lorenzana, along with senior officers from the Philippine Navy Headquarters, toured the French ship in the presence of Ambassador Michèle Boccoz and Rear Admiral Rey.

While in Manila until March 11, the Vendémiaire participated in an HADR preparatory activity with the Philippine Navy and Coast Guard following last month’s EU Crimario training mission to the Philippines.

The Vendémiaire last made a port call in the Philippines in 2021.

Commanded by Commander Alain Gaborit, the Vendémiaire has an overall length of 93.5 meters, a beam of 14.1 meters and a draft of 4.3 meters and is equipped with anti-surface guns, anti-aircraft guns and high-speed guns. The Vendémiaire is based in Nouméa, New Caledonia.

French frigates sailing overseas were designed to carry out surveillance and humanitarian missions and to advance French interests outside the mainland. These include: surveillance of overseas territories under French sovereignty (EEZ surveillance, fisheries protection and anti-smuggling); Maritime awareness and police patrol (anti-pollution, medical and logistic support); promoting maritime cooperation with allies in the region; and humanitarian action.

France is an Indo-Pacific nation through its overseas territories (New Caledonia, French Polynesia, Mayotte, La Réunion and Wallis and Futuna). 1.6 million French people live in the region, as well as 8,000 soldiers stationed in the region. France has the second largest EEZ in the world (10.2 million square km), more than 90 percent of which is in the Indo-Pacific.

In September 2018, France became the first country in the European Union to publish its Indo-Pacific strategy, recognizing the geopolitical and economic importance of the region. It is also a key supporter of the EU’s Indo-Pacific Strategy, launched in September 2021.

The French Indo-Pacific strategy aims to promote a stable, rules-based, multipolar order and commits to deepening France’s engagement in the region. It provides a framework for developing cooperation with its partners, including the Philippines and ASEAN, to jointly provide common solutions to global challenges such as ensuring maritime security, combating climate change and protecting biodiversity.

“France is an Indo-Pacific country and we are here to stay. This is a long-term commitment and we want to keep our word. We do this by having the presence of the French Armed Forces here and developing our relationships with their counterparts in the Philippines,” said French Ambassador Michèle Boccoz.