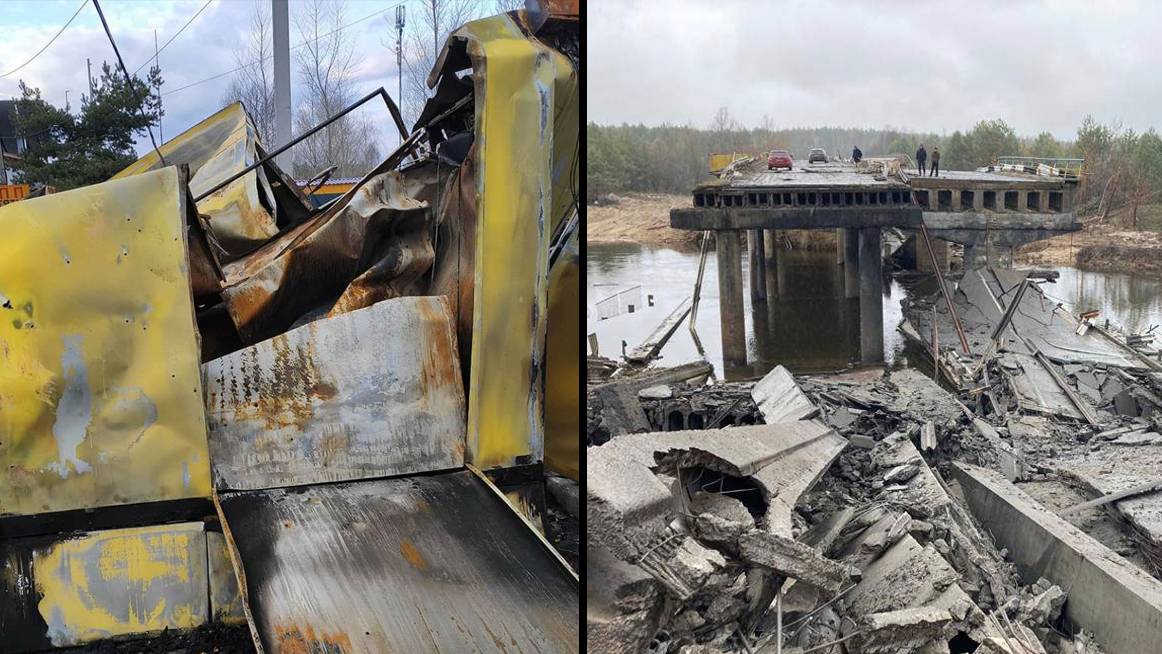 A tour group conducting field trips to the Chernobyl Exclusion Zone in Ukraine has released some of the first photos from the area since the Russian invasion on February 24.

Chernobyl was under the control of Russian forces until it was recaptured by Ukrainian forces after the invaders withdrew.

At the time, the Ukrainian Ministry of Defense wrote: “Yes, today, April 3, units of the Armed Forces of Ukraine took control of the Pripyat district and the territory of the state border of Ukraine with the Republic of Belarus.

“We continue to perform combat tasks! Together to victory! Glory to the DSHW! Glory to Ukraine!”

In the photos shared on Facebook by the ChernobylX tour group, it is claimed that the Russian soldiers destroyed a bridge over the river leading to Pripyat – the city near Chernobyl – and the nuclear power plant itself.

They also claim that an office inside the exclusion zone was raided and all computers and furniture were stolen.

A third photo shows a “completely destroyed” souvenir stand near the Dytyatky checkpoint, located in a village on the way to the power plant.

As the area has been retaken by Ukrainian forces, the Exclusion Zone Minister has raised concerns that Russian forces may have disturbed contaminated soil and therefore created a radiation risk.

Yevhen Kramarenko said an estimated 1,500 soldiers were stationed in the exclusion zone and he feared highly radioactive soil from the area could have been transported to other areas of the country on vehicle wheels.

He said passing tanks likely “picked up contaminated soil and mud along the way.”

He added that there could be a “serious radioactive problem” and said authorities now need to look for radioactive waste and radiation levels.

Chernobyl officials have also said that Russian forces drove armored vehicles through one of the most radioactive areas in the exclusion zone, known as the “Red Forest,” which could have kicked up more radioactive dust.

An unnamed employee described the move as “suicidal” because the dust in the area is so dangerous.

30 people died and around 200,000 were displaced when reactor four of the nuclear power plant exploded and caught fire in 1986.

An area stretching 19 miles around the facility is still considered too radioactive for human habitation and now forms the Chernobyl Exclusion Zone.

Despite this, the place is popular with tourists.

If you would like to donate to the Red Cross Emergency Appeal, which is helping to provide food, medicine and basic medical supplies, shelter and water to people in Ukraine, click here here for more informations

Tensions between China and Australia over the Solomon Islands are high, but it is in everyone’s interest to ease them | Tania Miletic and Anouk Ride