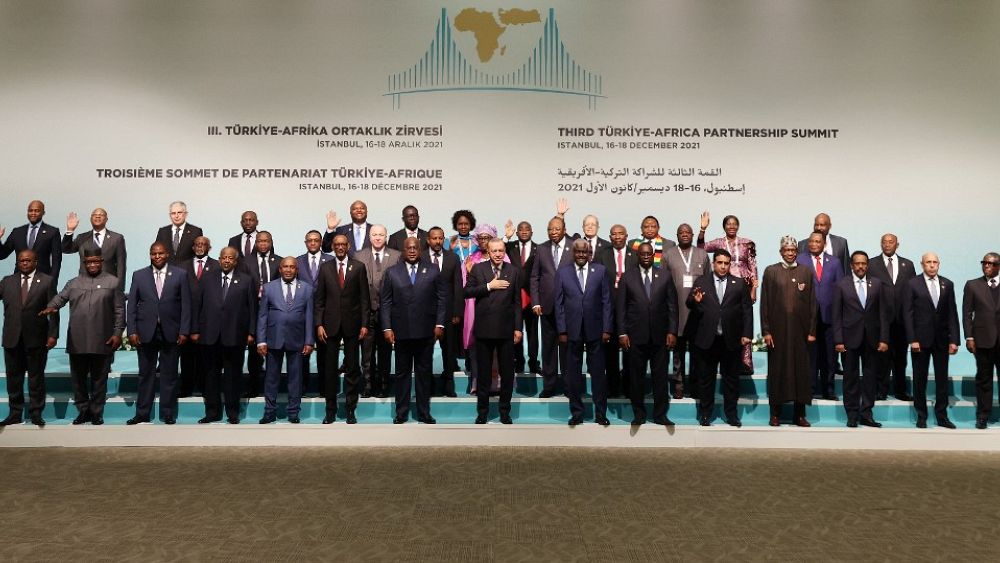 “Developments in recent years show us that it was a mistake to let five member states of the UN decide the fate of the whole world,” he said to dozens of African heads of state and government who opened in the audience of Friday in Istanbul Had gathered at the summit.

It is not fair, said Erdogan, “that the African continent with its 1.3 billion inhabitants is not represented on the UN Security Council,” while it represents a sixth of the world’s population.

But the summit is also a great business opportunity – Turkey has deepened its defense ties with African countries.

It also has sophisticated, battle-tested drones for sale.

Experts say this is the next stage in the rapidly blossoming relationship as a number of African leaders are looking to buy up military hardware at cheaper prices and with fewer editions.

In August Turkey signed a pledge of military cooperation with Ethiopian Prime Minister Abiy Ahmed, who has been involved in a war with Tigrayan rebels for a year.

Ankara already has a military base in Somalia, while Morocco and Tunisia reportedly received the first shipment of Turkish combat drones in September.

“The most important sector is the defense sector because it is a new asset. Turkey has been a major player in this sector, especially drones,” Federico Donelli, an international relations researcher at the University of Genoa, told AFP.

Russia was the most dominant player in the African arms market, accounting for 49 percent of the continent’s imports between 2015 and 2019, according to the Stockholm International Peace Research Institute.

But interest in Turkish weapons is peaking.

The Bayraktar TB2 model is in great demand after it has been credited in recent years for having influenced the fate of the conflicts in Libya and Azerbaijan’s breakaway Nagorno-Karabakh region.

The drones are made by the private Baykar company, run by Haluk Bayraktar, one of Erdogan’s sons-in-law.

“Everywhere I go in Africa everyone asks about UAVs,” Erdogan boasted after visiting Angola, Nigeria and Togo in October with his drones.

Turkey’s relations with Ethiopia are also being seriously scrutinized, where a brutal conflict, according to UN estimates, has killed thousands, displaced more than two million and driven hundreds of thousands into famine.

A Western source said Turkey sent an unknown number of combat drones in support of Abiy’s campaign earlier this year, but that Ankara has since responded to international pressure and stopped selling.

“Ethiopia can buy these drones from whoever it wants,” said the spokesman for the Turkish Foreign Ministry in October, without confirming or denying the sale.

Official Turkish data does not break down the details of military sales to individual countries, only gives the total sales amount for each month.

These skyrocketed in the past year.

Turkish arms and aviation exports to Ethiopia rose to 94.6 million US dollars (approx. 84.2 million euros) between January and November from around 235,000 US dollars (210,000 euros) in the same period last year, according to the Turkish Exporters Assembly published figures.

Drones as a bargaining chip

Turkey’s drones made international headlines for the first time after Ankara signed two agreements in 2019 with the United Nations-recognized Libyan government.

Then it flooded the conflict zone with drones, halting an advance of rebel forces in the east, supported by Turkey’s regional rivals, and paving the way for a ceasefire.

Turkey cemented the reputation of its drones last year by helping Azerbaijan recapture most of the country it had lost to Armenian separatists in controversial Nagorno Karabakh nearly three decades ago.

“Turkey now has more cards to play with drones than it does with other countries,” said Donelli.

“This is a very good item for Turkey to negotiate,” he concluded.

“We care about the defense sector and our relations with Africa,” Olpak told AFP.

“But I would like to emphasize that it would be wrong if we saw the defense sector only as weapons, missiles, artillery pieces, tanks and rifles.”

He highlighted Turkish mine clearance vehicles in Togo, which are considered sales of the arms industry.

Togo reportedly plans to upgrade its army through training and armored vehicles, weapons and other equipment, with assistance from Turkey.

Turkey has reportedly set up a network of 37 military offices across Africa in pursuit of Erdogan’s stated goal of tripling annual trade with the continent to $ 75 billion in the coming years.