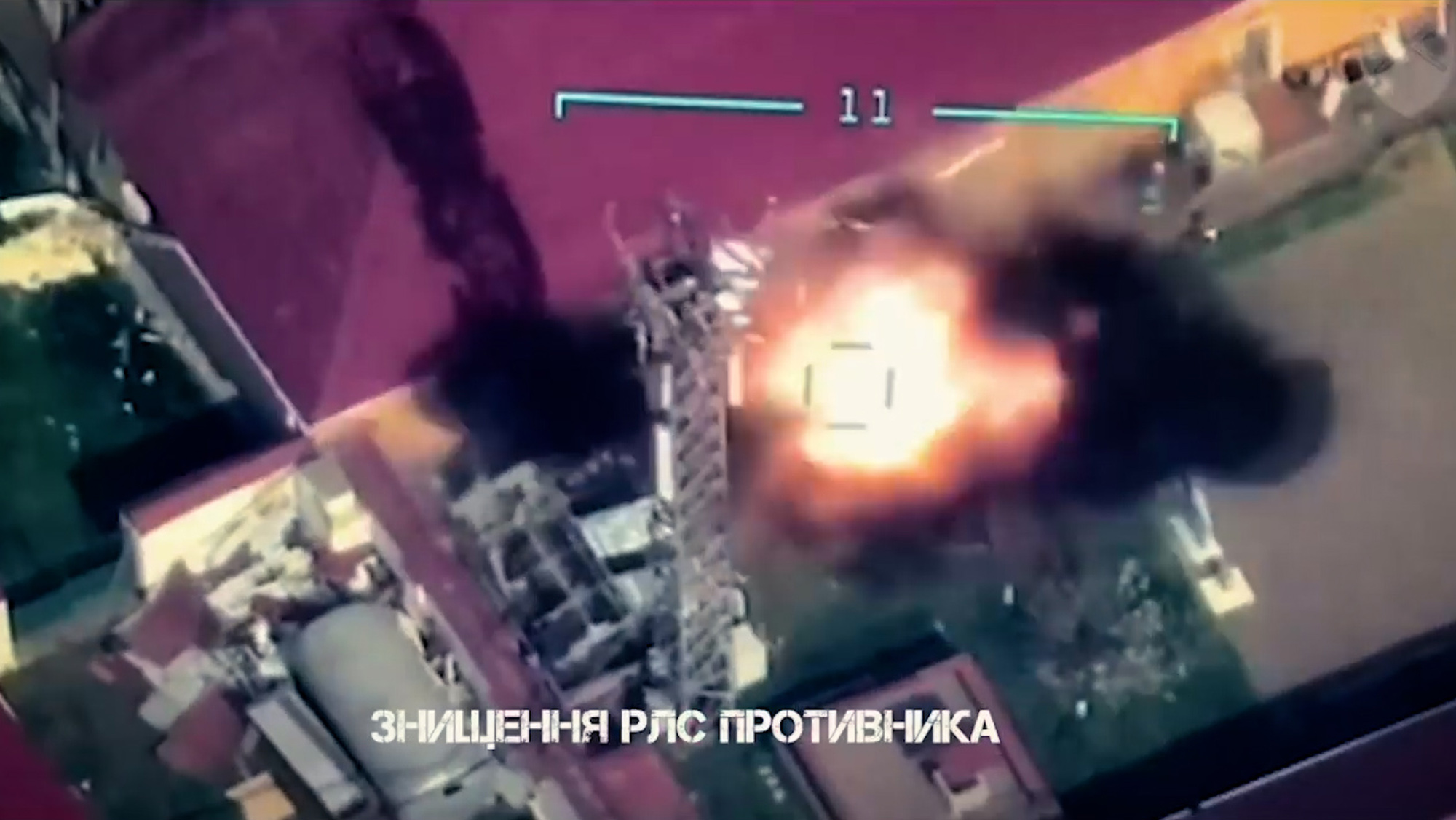 Ukraine said Russia lost nearly $1 billion worth of equipment and troops in an unsuccessful attempt to hold Snake Island.

They released footage of their two-month operation against the Russians, along with a detailed statement explaining how they retook the iconic island.

The footage was obtained by the Operational Command “South” of the Armed Forces of Ukraine along with a statement that said: “On Zmiiny [also known as Snake Island]the creation of a system of air defense and fire damage using missile salvo systems was aimed at ensuring control of the sea and sky in this Black Sea area.

“In the same methodical and planned manner that the occupiers equipped their garrison, our defense forces have combined forces to counter it.”

The Ukrainian military authority added: “The operation lasted more than two months. It was a whole complex and a cascade of management decisions, calculations of forces and means, a collection of data on the situation and the use of various weapons and equipment, calculating the enemy’s tactics and strategies and building our own, more effective, more expedient, often non-standard.

They explained: “The operation consisted of several phases. First, cutting off the routes of logistical support, targeting the ship depot, supply ships and equipment with which the enemy was trying to equip the garrison.

“By this time, the precise work of the ‘Bayraktar’ UAVs and the use of armed support and domestic technologies of partners affected four high-speed ‘Raptor’ patrol boats, a fast amphibious fast landing craft ‘Serna’, the ‘Admiral’, from the Essen frigate was significantly damaged, and the new modern tug “Lifeguard Vasiliy Bekh” was “transferred to the submarine fleet”.

“Nevertheless, according to intelligence, about three dozen pieces of equipment were delivered to the island: a Tor-M2 and a TZM SAM [surface-to-air missile] System, four ‘Pantsir-S1’ [self-propelled anti-aircraft missile and artillery systems]two ‘Grad’ and ‘Tornado-G’ [multiple rocket launcher vehicles]a BBM [armored fighting vehicle]three military vehicles, two diesel generators and about a dozen and a half items carefully camouflaged with one [camouflage] Network.

“After the sinking of the [Russian] ‘Moskva’ [guided missile cruiser]which provided cover for the naval group at sea with its anti-aircraft defenses, the Russians decided to create, so to speak, a stationary cruiser on the island.

“But a balanced and careful study of the situation, powerful planning and preparation for the most active period brought results.

“The command posts, obstacles and reconnaissance equipment that the occupiers had placed on stolen derricks in the Odessa gas field were hit suddenly and accurately. In addition to the losses themselves, this also made a convincing impression on the enemy about the desperation and real capabilities of the Defense Forces of Southern Ukraine.

“In the conditions of enemy air and missile attacks, radio-electronic suppression, the limited maneuverability of his artillery weapons, the purpose of the operation was achieved through constant fire, disruption of logistical support between the mainland and the enemy garrison on the island located on the was carried out by sea, and the demoralization of enemy personnel.

“The enemy left Snake Island and destroyed missiles that were not hit.”

They added: “Total casualties of Russian occupying forces around the island amount to more than $900 million.”

The images and statement were also shared by the Strategic Communications Office (StratCom) of the Armed Forces of Ukraine.

Russia has abandoned Snake Island in the Black Sea after being hit repeatedly by Ukrainian guns. Ukraine then released images showing the Ukrainian flag again waving over the island.

Commander-in-Chief of the Armed Forces of Ukraine Valery Zaluzhny previously said: “Unable to withstand the fire of our artillery, missile and air strikes, the occupiers left Snake Island.”

However, the Russian Defense Ministry (MoD) claimed via state media that they left Snake Island as a “goodwill gesture”, saying: “On June 30, the Russian Armed Forces made a goodwill gesture and completed the tasks on Zmiinyi [Snake] Iceland and withdrew the garrison there.”

But Andriy Yermak, head of Ukraine’s presidential administration, ridiculed the Russian statement, saying that “it’s all a complete fake,” adding that “Ukrainian forces drove the Russians out of Snake Island.”

Snake Island made international headlines at the start of Russia’s invasion of Ukraine on February 24 when a group of Ukrainian soldiers told a Russian warship demanding their surrender that it could “fool itself”.

The Russian warship reportedly demanded: “Snake Island, I, Russian warship, repeat the offer: Lay down your arms and surrender or you will be bombed.” Did you understand me?

But the Ukrainians replied: “Russian warship, fuck yourself.”

The Russians then opened fire on the Ukrainian positions. At first it was thought that the Russians had forgotten about the Ukrainian soldiers, but later it turned out that they survived. They were arrested by the Russians and regained their freedom during a prisoner exchange in late March, before being decorated for their bravery.

The ship that urged the Ukrainians to surrender, the Moskva, was later damaged and sank, with the Ukrainians claiming it was hit by their Neptun anti-ship missiles. However, the Russians claimed that a fire on board detonated the ship’s ammunition and that it sank while being towed into port.

Russia invaded Ukraine on February 24 in what the Kremlin still calls a “military special operation.” Tuesday marks the 139th day of the invasion.

Further developments in the Russia-Ukraine war:

Ukraine’s Defense Minister Oleksii Reznikov has hinted at plans to assemble a “million-strong army” armed with NATO weapons to fight Russian troops, but the comments were taken as a rallying cry rather than a concrete plan.

Russia is making strides in the Donbass region of eastern Ukraine and continues to hit areas across Ukraine with rocket attacks.

Reznikov has said that western arms need to be delivered to Ukraine faster. He said that for every day they have to wait for howitzers to arrive, they can lose up to 100 soldiers.

At least 34 people are now dead after a Russian missile hit a residential building in the city of Khasiv Yar in eastern Ukraine. Rescue workers continue to search the rubble for survivors.

At least six people died after Russian missiles struck Kharkiv in northeastern Ukraine on Monday, and Oleksandr Syenkevych, the mayor of Mykolaiv in southwestern Ukraine, said at least four people were injured by shelling on Tuesday morning.

Pavlo Kyrylenko, the governor of Ukraine’s eastern Donetsk region, said that 80 percent of civilians had fled, leaving about 340,000 people.

Germany and the Czech Republic have signed a joint declaration in which they pledge to overcome their dependence on Russian fossil fuels and accelerate the transition to low-carbon energy.

The Kremlin has said that Putin plans to meet Turkish President Recep Tayyip Erdogan after they discussed how to facilitate the export of grain from Ukraine.

The US has warned that Iran plans to supply Russia with drones. White House National Security Advisor Jake Sullivan has said intelligence indicates Iran is making preparations to train Russian troops to use its drones.

This story was provided by Newsweek Zenger News.