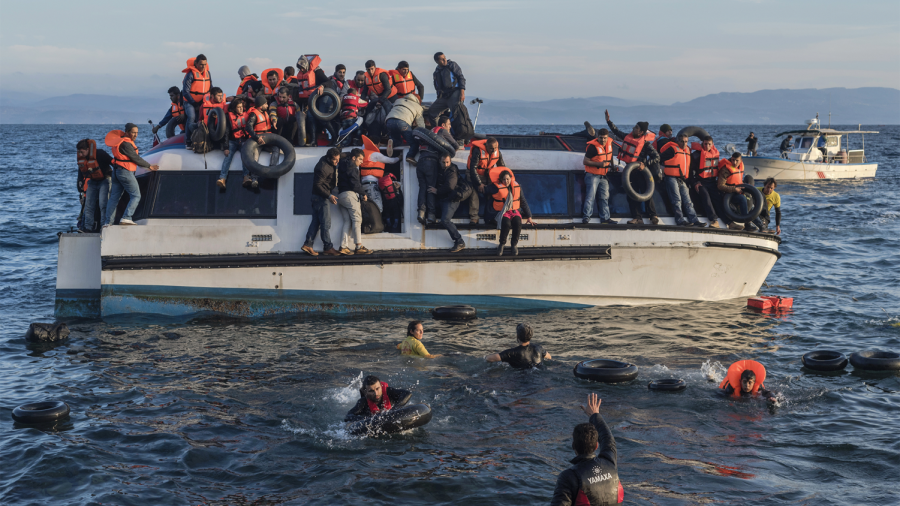 According to the United Nations, around 13.3 million Syrians have been displaced since 2011 as a result of the country’s civil war. Almost half of all refugees worldwide are under 18 years old. (Photo by Ggia/Wikimedia Commons)

The Russian invasion of Ukraine signaled the start of the latest global conflict. The mainstream media is fully focused on this war, social media has been flooded with support for Ukraine and the news channels have not gone a day without reporting on the conflict since Russia invaded. But where is that attention to other wars happening around the world?

I am not downplaying the atrocities in Ukraine and I understand the gravity of this war, given that Russia is a nuclear power. Nevertheless, for decades the same crimes against humanity that are being committed in Ukraine have been happening in non-European countries. Yet these conflicts have received too little attention, especially the wars in the Middle East.

Over 30 million people watched as President Joe Biden stood firm with Ukraine during his March 1 State of the Union address. However, Biden did not speak about the horrors unfolding in Syria and Yemen.

The Middle East has not gone a year since 2003 without a country at war. The longest war in this period is the ongoing Syrian civil war. According to the Syrian Observatory for Human Rights, it has claimed at least 350,000 lives, including 3,746 in 2021 alone. Last year’s casualties included 1,505 civilians, including 360 children. Unfortunately, the decades-long conflict has no end in sight.

According to the World Food Program, 12.4 million Syrians, which is almost 70% of the population, have no consistent access to food due to the perpetual conflict. While Russian billionaires froze their assets less than a month after the war in Ukraine, it was only last October that Interpol allowed Syria to rejoin its network without objection from the kickback.

Despite these recent events, there has been no recent coverage of these matters. The only reason the war received significant media coverage was the Syrian refugee crisis. The problem remains the world’s largest refugee and displacement crisis, with 13.5 million Syrians forcibly displaced. The coverage of this crisis is due to the mass migration of Syrian refugees to European countries.

With the American media and government focused on the Ukraine conflict, the world has detached itself from the Syrian civil war. The longer this goes on, the more Syrians will die.

Less than 1,500 miles away, Yemen is also caught in a civil war. The conflict dates back to 2011 and turned into a full-blown civil war in 2014 when the Houthi rebels seized the capital Sanaa and forced President Abed Rabbo Mansour Hadi into exile. The war caused relentless famine in Yemen, leaving up to 19 million Yemenis, or 64% of the population, food insecure.

Both the Houthi movement and the Saudi-led coalition supporting Hadi’s government have committed several horrific crimes against humanity. The only way to a solution is to hold both parties accountable and not choose sides; However, the US government has openly supported the Saudi coalition.

The lack of media coverage of the wars in Syria and Yemen can be attributed in part to the length of the wars. Both wars have been going on for over five years and the war in Ukraine is the latest and most intriguing news. However, atrocities still happen in these wars. At least 47 children were wounded or killed in Yemen’s civil war in January and February, and two Syrian civilians were killed in a rocket attack in Syria this month. These recent tragedies and the hunger problems in both countries deserve a lot of media attention, no matter how long the wars have lasted.

Another reason is the clear double standards displayed by the media in non-European conflicts. Western media consistently label the Ukrainian government and civilians as “heroes” and label rebels like the Houthis as “terrorists.” Both coalitions fight for freedom from corrupt governments using inhumane methods. In Ukraine, black immigrant students and black Africans have been victims of racist abuse at the border. They were forced to stay in the country while guards let white Ukrainians flee the country. This blatant hypocrisy sets a powerful precedent in the Western media that certain lives are more important than others.

According to a January 2021 study by the Pew Research Center, 86% of Americans get their news from digital devices and 68% get their news from television. If you turn to any news channel, nobody talks about the seriousness of the conflicts in Syria and Yemen. If Ukraine were suffering from famine at this very moment, every news channel would be covering it. Syria and Yemen have faced a staggering number of food insecurity for years, and it feels like no one is turning a blind eye.

I’m not asking news organizations to divert attention from the Ukraine conflict. The job of the media is to cover major conflicts in the world and the Syrian, Yemeni and many other wars have been pushed aside. Not all wars are created equal, but all crimes against humanity should come first.