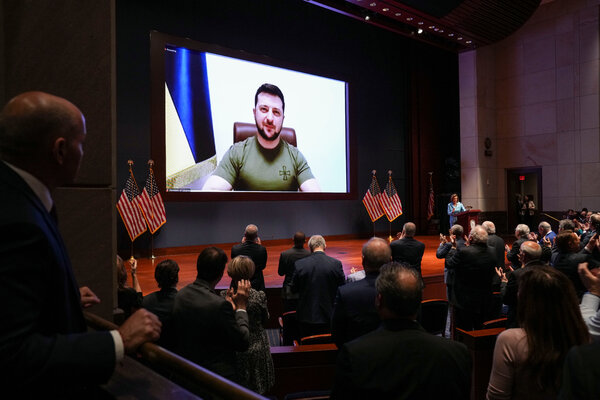 Mr. Biden will detail the new military aid later this morning, shortly after Mr. Zelensky provided a list of military equipment and other aid he believes is necessary to repel the Russian invasion and specifically to hold the capital Kyiv. Topping the list are more anti-aircraft batteries, allowing them to harass – and shoot down – Russian cargo planes and fighter jets arriving near the contested city.

Alongside requests for weapons and warplanes, Mr Zelensky has asked NATO to enforce a no-fly zone, a move allies have rejected because it would bring them into direct combat with Russian forces. To enforce the no-fly zone, American forces would need to disable Russian air defenses – inside Russia – and Mr Biden has dismissed the move as unnecessary. Russia has warned it would consider a no-fly zone an act of war.

Those weapons included at least 600 Stinger anti-aircraft missiles and about 2,600 Javelin anti-tank missiles, according to a senior White House official. But what Ukraine needs are more sophisticated missile defense systems.

So far, the Americans have also provided Ukraine with five Mi-17 helicopters, three patrol boats and 70 other vehicles of various types.

The weapons will come from existing US military stockpiles in Europe and will be flown to neighboring countries such as Poland and Romania, where they will be shipped overland to western Ukraine, the official said.

The Biden administration has also asked Congress for $4.25 billion in new funding for economic and humanitarian assistance to Ukrainians.

The Biden administration rejected this plan because of the risk that it could drag NATO directly into the war. Instead, the Biden government provided Ukraine with anti-tank and anti-aircraft weapons.