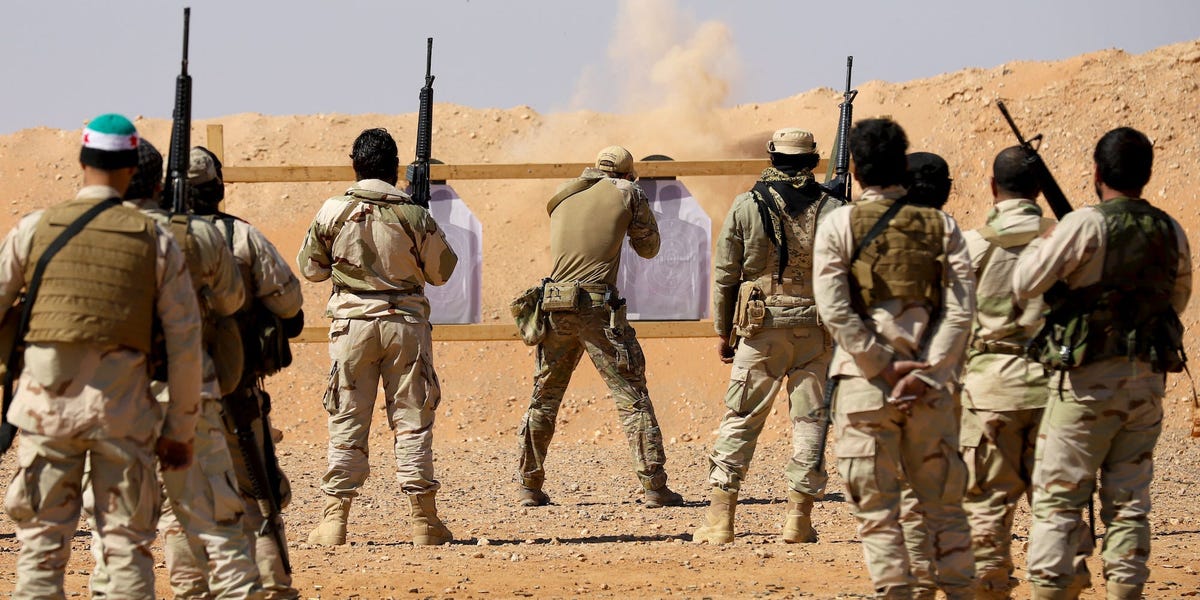 Access your favorite topics on the go in a personalized feed.

A remote US special operations base in the Syrian desert is embroiled in a shadow war between military powers in the Middle East.

The Al-Tanf Garrison, a US base that typically houses between 100 and 200 US troops alongside coalition forces, has been a hub for operations against ISIS as well as Iran and its proxies for years. In August and September, the outpost was embroiled in a series of attacks, including a missile attack by Iranian-backed militias that wounded three US troops.

The base was established in 2016 when US forces were in the midst of hostilities against ISIS in Syria. US and coalition forces needed a stronghold from which to isolate ISIS fighters and monitor activities across the region.

Al-Tanf – in south-eastern Syria on the M2 Baghdad-Damascus highway and near the borders with Iraq and Jordan – was the ideal location.

The area around the base was liberated from ISIS that year. Shortly thereafter, the US and Russia, both operating in the area, agreed to set up a 34-mile deconflict zone around the outpost.

The garrison has been a springboard for counter-terrorism and counter-smuggling operations, as well as the delivery of humanitarian assistance and coalition-led training efforts. Getting a foothold in al-Tanf also helps the US participate in discussions about Syria’s future.

In recent months, however, al-Tanf has become a focal point in a shadowy conflict between the region’s key players: Israel, the US, Russia and Iran.

Israel regularly attacks Iranian-backed forces in Syria, and overflying al-Tanf allows Israeli planes to limit their exposure to Syrian air defenses, most of which are in western Syria.

Routes near al-Tanf are particularly attractive for Israeli strikes against Iranian proxy forces near the al-Qaim crossing point with Iraq.

Current and former US defense officials told The Wall Street Journal in mid-June that the US has for years reviewed Israeli plans to attack Iranian proxies and allies in the region to avoid interfering in US-led operations against ISIS, particularly those against al-tanf.

“They like using our air corridors because [Syria’s] Air defense can’t tell the difference until it’s too late,” a former defense official told Al Monitor later that month.

But allowing Israel, and occasionally Jordan, to operate around al-Tanf has exposed the US to retaliatory attacks from Iran and its proxies.

The base was hit by a drone strike suspected to have been launched by Iran on Aug. 15, a day after Israel struck military targets in the Syrian provinces of Damascus and Tartus — attacks targeting a Syrian air defense base frequented by Iranian-backed fighters, the authorities said Syrian Observatory for Human Rights, a UK-based monitoring group.

The August 15 airstrike, which caused minimal damage and no casualties, prompted the US to respond with an airstrike on August 25, which in turn sparked a series of attacks by US-Iranian-backed forces.

Russia’s war in Ukraine could create new problems for US troops in al-Tanf.

Grant Rumley, a US Department of Defense adviser on Middle East policy during the Trump and Biden administrations, told Insider that there are other threats surrounding al-Tanf that need to be considered now.

One is to continue the fight against ISIS by staying physically present and expelling the group’s fighters from the surrounding villages.

The base’s role in the Syrian conflict and wider tensions in the region could also become even more confused. US and Russian forces are conducting patrols in northeastern Syria, where they have had both contentious and friendly interactions, but Russia’s stance may change due to events in Ukraine.

“There is a risk that Russia will worry on the ground in Syria about the perception that it is solely focused on Ukraine,” Rumley said. “In that respect you could see more erratic Russian behavior and they couldn’t meet the 55km [deconfliction] Zone or there could be more friction at checkpoints.”

Iran is also increasing its arms sales to Russia and sending hundreds of drones and missiles that Moscow uses in Ukraine, which could hamper Tehran’s actions in the Middle East.

In exchange for those weapons, Iran could ask Russia to pressure Israel to scale back or halt its attacks or allow for an increased Iranian presence on the ground in Syria, said Rumley, now a fellow at the Washington Institute, who focuses on the competition between Major powers concentrated in the Middle East.

Russia has withdrawn combat troops from Syria in recent weeks, which could signal a shift in Moscow’s role there, but it’s unclear what these or other changes might mean for the US mission in Syria and for al-Tanf, Rumley said.

“The dynamics in Syria will change as Russia continues to be overwhelmed by Ukraine,” Rumley told Insider. “What may not have been possible in the past, like some sort of negotiated outcome, may or may not become possible in the future,” he added.

Rachel Nostrant is a US-based journalist whose work has been published in New York, VTDigger, Military Times, and Defense News magazines. She has covered issues such as pollution outside military bases, the murder of US Army soldier Vanessa Guillen, rising tensions between China and Taiwan, and the war in Ukraine.