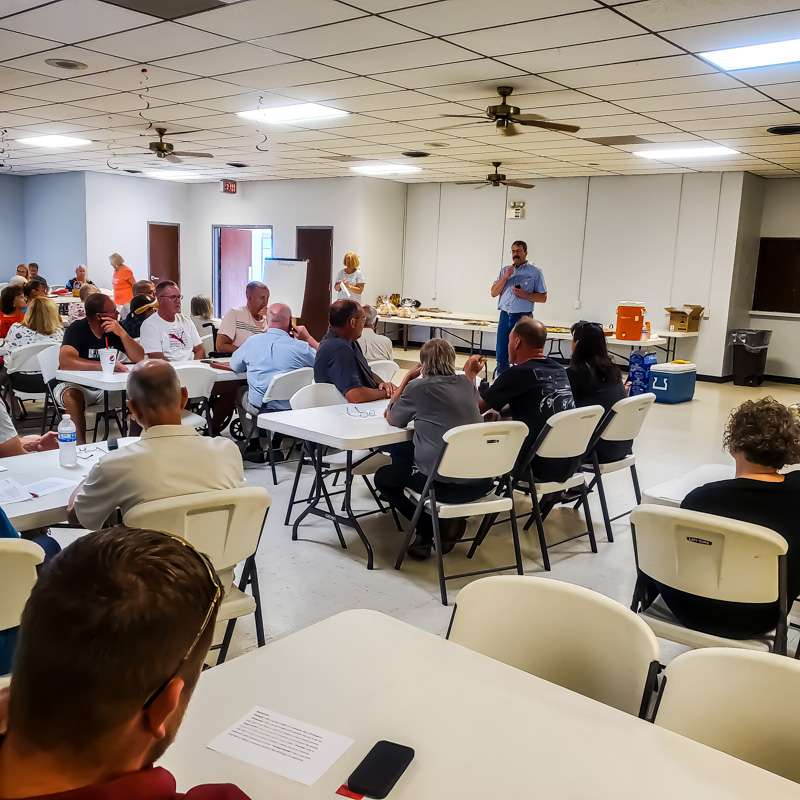 VICTORIA — On Wednesday, residents of Victoria gathered at the Veterans of Foreign Wars Hall, 204 E. Main to discuss issues facing the community while compiling data for a home assessment tool required for government funding applications.

“I’m tickled all red just to see everyone here,” Pfeifer said. “It means a lot to me that each of you, during your busy week or evening, take some time to relax and come here to do something for our community. And that’s why we’re here tonight.”

The main goal of the meeting was to allow the coalition to gather feedback and conduct surveys from residents that will allow applications for grant funding to benefit the city and its residents.

“We’re trying to work with the city to get some of this funding that could help our community,” Pfeifer said. “It could be on buildings and on streets.”

He pointed to ongoing grant-funded repairs to Cathedral Avenue, along with improvements to the city’s water system.

“We have to start somewhere,” Pfeifer said. “And that’s only possible if you bring the community together and have some ideas of what you think it could look like in the future.”

Beginning the intelligence gathering, Johnson urged the crowd to consider the city’s strengths.

The crowd was quick to note the work ethic ingrained in Victorian citizens along with strong ties to faith, family and community.

And while the community’s strengths centered on its people, the city’s lack of significant businesses was cited as a key concern when it came time to discuss weaknesses.

Along with a desire to see some sort of grocery store, perhaps in the style of a Dollar General location, the lack of housing and child care were among the community’s top needs.

While many larger concerns were prominent parts of the conversation, smaller actionable ideas also entered the conversation as the discussion veered towards opportunities.

And they found that small steps like planting trees and creating more activities for youth in the city help attract and keep younger families in the city.

“We also need to get more people involved,” Johnson said.

The group then prioritized needs, with housing and childcare offered as the most urgent. However, as the conversation continued, prioritizing shopping locally whenever possible was cited as an important way to ensure businesses opened in Victoria remain profitable.

However, a farmers’ market has been proposed to encourage local shopping without the need to open a store.

“They’re pretty popular,” Johnson said. “Then you could really do some community building around them if you do it on a Wednesday night. I have a church that brings some of the high school kids in and makes music and they have an occasional food truck and they have something like church events mid-week in the evenings.

“It really needs to be a little community party every Wednesday night,” she continued. “So you can really have fun with that and really embrace that idea and start building.”

“We have models in Northwest Kansas,” Johnson said. “So that’s what we did.”

She also encouraged crowds to explore what other cities of a similar size have been doing to expand their trading opportunities.

For Victoria, getting polls back from the community is a beginning of many initiatives. As attendees filled out their surveys during the meeting, many more are needed, and Pfeifer finally said committee members would go door-to-door as needed.

“If you’re trying to take steps and you want to get your steps done, I’m sure they could use some volunteers to help knock on doors and improve some of them,” Johnson said.

And the more polls the better, she said.