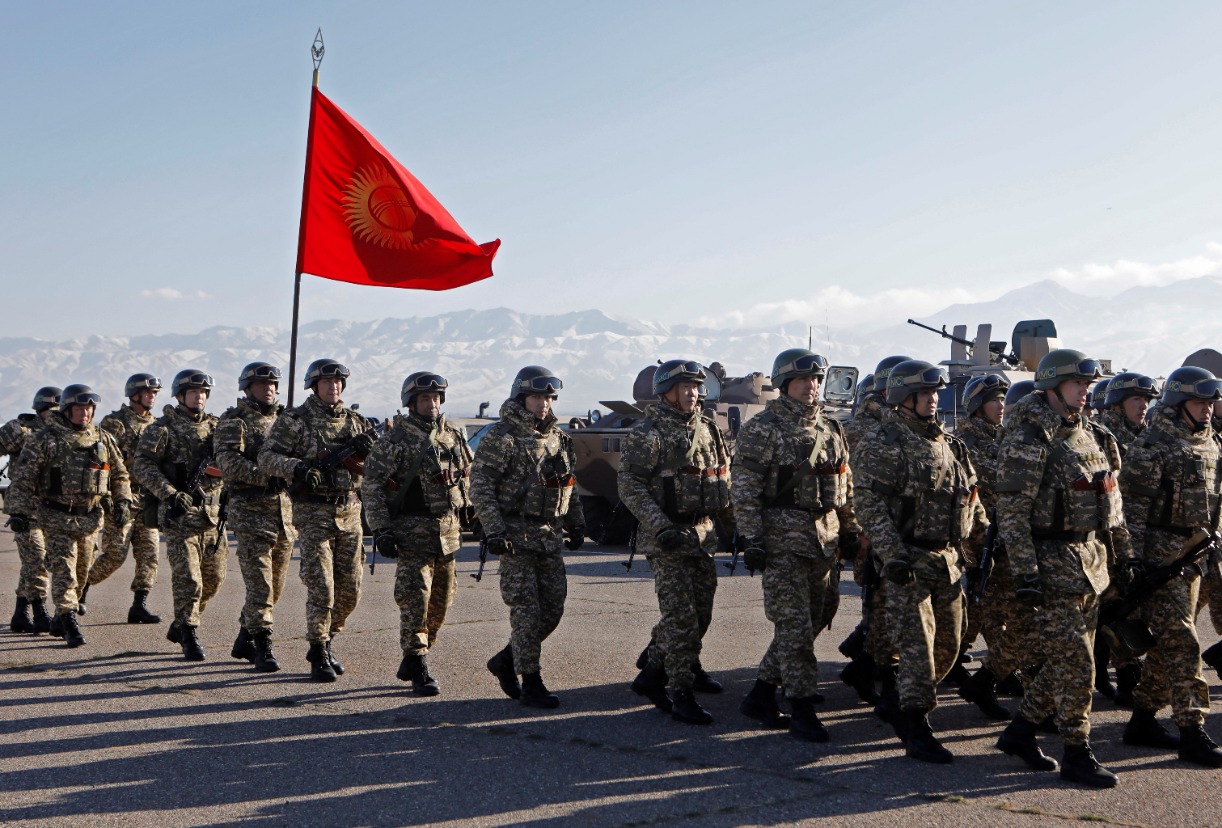 In response to a request by Kazakh President Kassym-Jomart Tokayev on January 5, 2022, the Collective Security Treaty Organization (CSTO) triggered for the first time its military function, enshrined in Articles 2 and 4 of its charter, to are helping one of its member states with nationwide protests. Although many speculate as to what fueled the January protests in Kazakhstan, this article will examine the timing of the CSTO’s military deployment. Despite multiple requests in the past, including from Kyrgyzstan’s President Kurmanbek Bakiyev during the 2010 protests and Armenia during its conflict with Azerbaijan in late 2020, the CSTO did not intervene. Such was the perceived passivity of the organization, which was a prominent think tank a few months ago asked bluntly: “Does the Collective Security Treaty Organization have a future?” What has changed in 2022?

To answer this question, before considering the specifics of the Kazakh case, it is important to first understand why the CSTO has been relatively inactive in the past. The passivity of the CSTO is driven by its lack of institutional autonomy and intra-organizational coherence, also known as “institutional barriers”. Although the CSTO is often compared to NATO and some of its functions are undeniably similar, the CSTO does not display a high degree of institutionalization.

The first barrier lies in the asymmetry of the organization: Russia contributes 95 percent of its military spending. This means that decisions on military operations, although formally multilateral and consensual according to Article 12 of the CSTO Charter, are largely influenced by Moscow’s interests and subject to its approval. Smaller member states have also been reluctant to involve Russian troops in their domestic conflicts, fearing a possible encroachment on their sovereignty. This, together with the unanimous decision-making process, has contributed to the CTSO’s record of inaction.

The second institutional barrier lies in the different threat perceptions of the member states. After all, the organization lies on three subcontinents with three corresponding “regional security complexes”: Central Asia, Eastern Europe and the South Caucasus. Differing economic interests, threat perceptions and authoritarian consolidation mechanisms make it difficult to classify intrastate or local conflicts as a collective security threat that outweighs individual national interests, which can be justified with Article 5 of the CSTO Charter (“Non-interference in internal affairs”).

These institutional barriers may explain the CSTO’s earlier refusal to intervene. In 2010, Moscow and other member states did not view the chaos engulfing Kyrgyzstan (Bakiev’s overthrow and the resulting violence in Osh) as a threat to their national interests, particularly given the country’s political unrest and regime change. In addition, Uzbekistan’s President Islam Karimov expressed concerns about an encroachment on the sovereignty of Kyrgyzstan (when the country was still a member of the organization). Furthermore, in 2020 the CTSO member states did not consider the Nagorno-Karabakh war – Nagorno-Karabakh is de jure Azerbaijani territory – and border raids by Azerbaijani soldiers in Armenia as a security threat. Once again, strategic considerations trumped any justification for intervention, and flexibility in interpreting the CTSO charter prevented a full-scale response.

In contrast, the deployment of CSTO troops in Kazakhstan last January was possible because these institutional barriers were overcome by higher concerns. The great Central Asian republic is the second largest economic and military power within the organization after Russia, and until recently was one of the most stable authoritarian regimes in the region. This makes Kazakhstan a “senior partner” within the organization due to its contributions and proactivity not only in the CSTO, but also in its “sister organization”, the Eurasian Economic Union (it has the same member states, except for Tajikistan). Thus, Kazakhstan is one of the most important strategic partners for Russia and the other authoritarian member states of the post-Soviet space. Consequently, this made the Kazakh crisis amenable to CTSO intervention.

Furthermore, the nature of the Kazakh protests, at least initially, resulted from rising LNG prices due to ongoing price liberalization as part of the government’s overarching austerity policy in response to the Covid-19 pandemic. Faced with mounting pressure on Kazakhstan’s stable authoritarian regime, the other CSTO leaders concluded that if the Tokayev regime collapsed, the “color revolution” would spread across the region, a constant fear of Eurasian rulers since the early 2000s . It is no coincidence that all CSTO members and key regional non-member states such as China and Uzbekistan agreed around a narrative that frames events in Kazakhstan as a foreign-orchestrated, Western-backed revolution. Because of these two peculiarities, along with rising political unrest in other member states such as Armenia, Belarus and Kyrgyzstan, the Kazakh case was quickly documented, leading to rapid approval and deployment of CSTO forces. Given the urgency – Tokayev needed to be shored up quickly, regardless of cost or procedure – this also explains why the United Nations (UN) was not consulted.

However, it is important to emphasize that the CSTO troops deployed to Kazakhstan did not conduct any military action, as some analysts incorrectly reported. Instead, CTSO forces were limited to securing and sealing off strategic infrastructure such as power grids, water supplies, and weapons depots. The presence of the CSTO and its limited mission in Kazakhstan speak to the organization’s ability to change. Over the past decade, not only has the CSTO’s Rapid Reaction Forces been reinforced through frequent and complex exercises that reflect the challenges of modern warfare, but the organization has also achieved the status of a “Regional International Organisation”, giving it full international legal responsibility within the Chapter VIII conceded framework of the UN.

In addition, at the meeting of the Council of Foreign Ministers on May 19, 2021 in Dushanbe, a draft agreement on jurisdiction and mutual legal assistance in cases related to the temporary presence of armed forces in the territories of CSTO member states was approved. The purpose of the document is to create a mechanism for cooperation between the competent authorities of the CSTO member states, such as part of the armed forces of the CTSO member states. In retrospect, this development is crucial for understanding the organization and intervention of the CTSO in Kazakhstan.

Given the alleged infighting within the elites taking place in parallel with the January 2022 protests in Kazakhstan, the CSTO’s intervention also had a symbolic function, legitimizing Tokayev during the unrest. In fact, the deployment of CSTO troops was not an act of regional politics, but rather that domestic Politics. The CSTO’s intervention in Kazakhstan and the restoration of stability in a relatively short period of time was a great demonstration of its capabilities. Since the intervention, the General Secretary of the CSTO, Stanislav Zas, has repeatedly stressed the organization’s effectiveness, legitimacy and operational readiness. During the closing ceremony, Zas noted that “contrary to the negative reviews of CSTO activities imposed by some of our enemies, our organization has demonstrated its relevance and effectiveness, its ability to act quickly, decisively and effectively without delay.”

While we are careful not to overestimate the importance of the CTSO’s initial intervention, three observations point to the organization’s future potential. First, the CSTO is no longer a dormant organization but an active one insofar as its activities are equated not only with military intervention but with broader security management. Second, the organization clearly has the potential to engage in a broader geopolitical confrontation with the West, as signaled by the CTSO’s more proactive role not only in Eurasia but also in the Persian Gulf and Africa, at least at the declaratory level. Third and last, the CSTO has proven that as a channel for the authoritarian solidarity by facilitating convergence on specific interpretations of the two normative pillars of the Eurasian security complex –avtoritet (authority) and stable’nost’ (strategic stability) – while taking into account Russia’s hegemonic role in the region.

A final consideration lies in the international (typically Western) portrayal of the CSTO as an immutable entity, somewhat frozen in time. In fact, this “CSTO showcase” does not mean that a sudden restructuring has taken place in the organization. Contrary to some who see the organization as a frozen and immutable Soviet-style apparatus, the CSTO has steadily evolved over the years. What was originally a security treaty signed in Tashkent in 1992 became an organization. Deeper and more complex institutionalization efforts then took place in 2002 and 2010, when the CTSO created the Collective Rapid Reaction Force (CRRF), a military branch that can be authorized by the CSTO Collective Security Council for any contingency. As such, the organization’s new “turn” in 2022 is part of the natural evolution of the CSTO as a regional organization, rather than a sudden change. The organization explains this as General Secretariat Zas signaled the new and more active functions of the CSTO, while dismissing claims that the organization needs a major change to its framework. In summary, we see the comments on the organization as “frozen”, reflecting a lack of attention and general ignorance of developments over the past two decades.

Siheon Nathaniel Choi is a Ph.D. Candidate at the School of International Relations at the University of St Andrews. His interests lie in the areas of authoritarianism, regionalism and the politics of the post-Soviet space and Eurasia. He can be reached at [email protected].